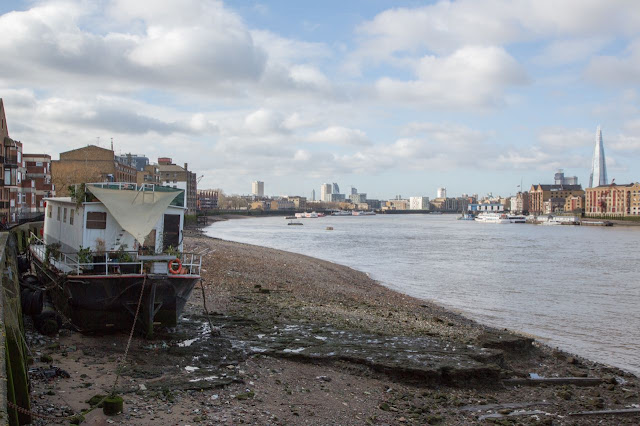 Took a photo walk yesterday in Rotherhithe, on the south bank of the Thames where the river bends around Canary Wharf and the Isle of Dogs, east of Central London. This is a neighborhood I've never explored much, and it's an interesting mix of old historic structures and new housing. I started at the Canada Water tube station, where most of the buildings are characterless and modern, and wound through the densely packed maze of streets to the waterfront.

It was windy and freezing cold on the river -- my hands got numb! I had a great view back toward the city, though, across mud flats exposed by the low tide. And we had sunshine! 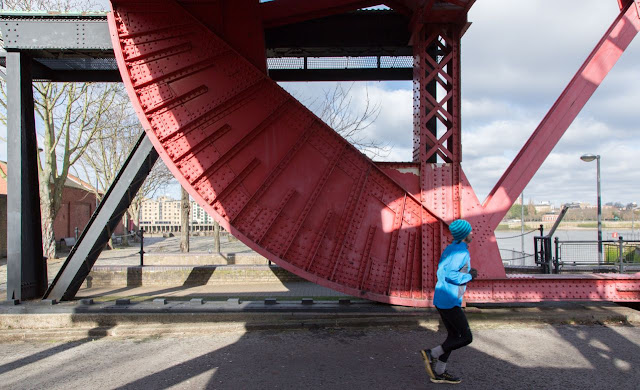 There was an old metal bridge across a lock that led to an inland lake called Surrey Water. I think that rounded piece rolls back to lift up the bridge -- which definitely seems like a public hazard -- but I'm not sure it functions now. 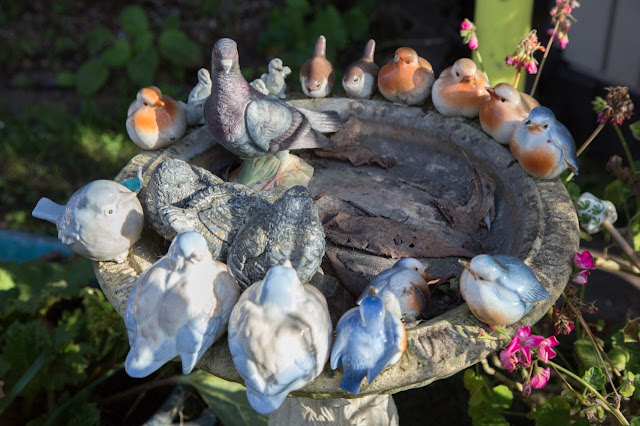 In someone's garden I spied this bird bath so packed with fake birds a real one couldn't find space! 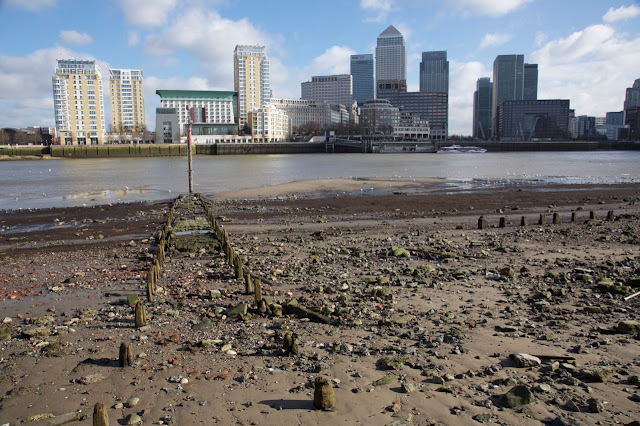 Across from Canary Wharf I descended some worryingly dilapidated stairs to a beach. There were rotted pilings for a long-gone dock extending into the water. (This river must be full of navigational hazards, particularly near the shores.) I walked on the sand and found a nice chip of old blue-glazed pottery.

Afterwards I ran an errand. Dave has a Tag Heuer watch that he never wears -- a gift from a former partner -- and since he's not a wristwatch guy he's interested in selling it. So I did some Internet research and took it to a jeweler near Bond Street, who referred me to another jeweler, who referred me to yet another jeweler. (Apparently my research was lousy.) Eventually I spoke to someone who told me it would be worth up to £200 except that it's engraved, which makes resale difficult. (I figured they could just buff out the engraving or replace the backplate, but apparently it's not that easy.) So we may be stuck with it.

These are the sorts of tasks you work on while on vacation, right? Those bottom-of-the-list tasks.

The other day I talked about being out of TV shows to watch, and Sabine suggested "Deutschland 83." By coincidence Dave and I had already been watching it -- I simply forgot to say so. Have any of you seen it? I'm not sure it's available in the States, and it is subtitled, but it's an excellent show -- a mini-series, really, with about eight episodes. It's about the Cold War in Germany in the early 1980s. Check it out if it comes your way.
Posted by Steve Reed at 6:45 AM