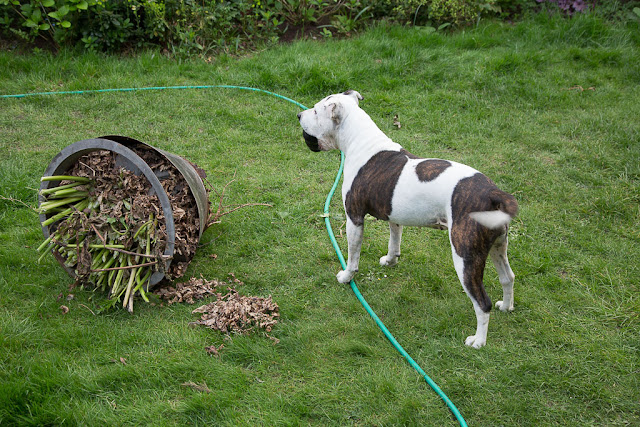 Remember how I rescued the discarded fig tree? (Or attempted to rescue it, I should say -- we still have it but it's not showing any leaves yet, so I'm not sure whether it pulled through its ordeal or not.)

Along the same lines, here's another plant rescue story.

I've mentioned the house down the street with the lions -- the one that was recently vacated and is now under renovation. The lions, you will recall, were adopted by a neighbor. And since I last wrote about it, the old bicycle out front has been discarded, and I've been keeping an eye on the large potted acanthus beneath the big front window. I've always liked that plant.

Early this week I was sorry to see that it had been pruned within an inch of its life, which seemed a sign that it was going in the trash. So I asked the workmen if I could have it.

"We trimmed it rather harshly," one admitted. But he said sure, take it away.

So Dave and I picked it up last night, and carried it in its rotten, rusty metal pot back to our garden. That's it above -- Dave tipped it on its side so we could check out the roots on the bottom, which had grown through the deteriorated metal pot and into the ground.

We're not sure where we're going to put this plant, which is huge -- far bigger than any flowerpots we have. It's probably going in the ground. From what we've read it's quite robust so I think it will pull through. Fingers crossed! (My money is on the fig pulling through, too -- stay tuned!)

In other news, I've made a plan for a little overnight trip next week, when Dave and I are on spring break. I'm going to run up to Newcastle, in far northern England. I've never spent any time there, and thanks to the £25 voucher I got in compensation for our hotel snafu in Luxembourg, I was able to procure a promising hotel room for just £10! How could I say no?
Posted by Steve Reed at 6:33 AM

You and Dave were made for a garden.

I await news of Newcastle. And, if you and Dave ever get tired of your gig at the school, you can always take up horticulture, hanging out a sign which reads, "Plant Doctors." They way I look at gardens, they're more real estate for bees.

"Acanthus Rescue" sounds like the title of a thrilling new TV drama - something like "Ghostbusters" but with a plant bias. In the first episode plantbusters Professor Dave and his sidekick Shifty Steve dressed in their familiar lime green overalls bust a nursery in Surrey where several acanthus plants have been thrown on a heap. Of course good always triumphs over evil.

I had a fig tree that was an indoor plant. It was very large...reached he ceiling but it was in my classroom.

I had to look acanthus up. no wonder you saved it.

Like Ellen, I had to look this one up and I can see why you want to save it. It's a beautiful plant. I'm sure with you and Dave's magic touch it will come back to life. You'll have to let me know if you find you can plant African daisies in England.

A severe pruning is sometimes just what a plant needs. Although, er, I'm not sure if the acanthus falls into that category or not. (I am a severe pruner, by the way.)

Nice to have another getaway planned! You folks seems to have frequent holidays over there - it must break up the school year nicely.