Death (Almost) in the Afternoon 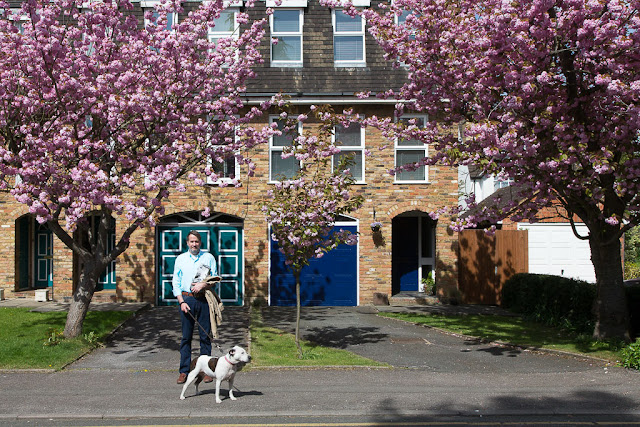 Yesterday we were invited to the home of some colleagues from work, Carolyn and Mark. They live in Northwood, far northwest London, on a street that I (coincidentally) photographed for Bleeding London several years ago. When Carolyn gave us directions, I thought, "I know that area!" So finding the house wasn't too difficult.

They have small daughters who love Olga, so we brought her along, after receiving assurances that their cat would be safely stashed behind closed doors on the third floor. The girls played with Olga in the back yard, throwing the Kong over and over, and everything went smoothly until, of course, the cat got out. Next thing I knew, Buddy and Olga were face-to-face on the grass, giving each other the Death Stare from about four feet apart. Olga launched herself and my entire life flashed before my eyes, as I thought, "My dog is going to kill this cat right in front of these young girls!"

Fortunately, Buddy moved fast -- faster, Carolyn said, than she's ever seen him move -- and made it through a hole in their backyard fence, thereby averting bloodshed. The cat hadn't returned by the time we left last night. I think he was probably watching from a safe distance to make sure that Olga was gone first.

That was more excitement than any of us counted on -- especially Buddy.

Otherwise, it was a good visit. I consumed two vodka martinis over the course of the afternoon, and though I am normally a gin man, I must say, I do see the appeal of the vodka. Dave and Mark cooked a gargantuan slab of beef, and we -- joined by our friend Keith -- had an excellent meal before coming home bleary-eyed on the Tube.

(Photo: Dave and Olga walking in Northwood.)
Posted by Steve Reed at 7:15 AM