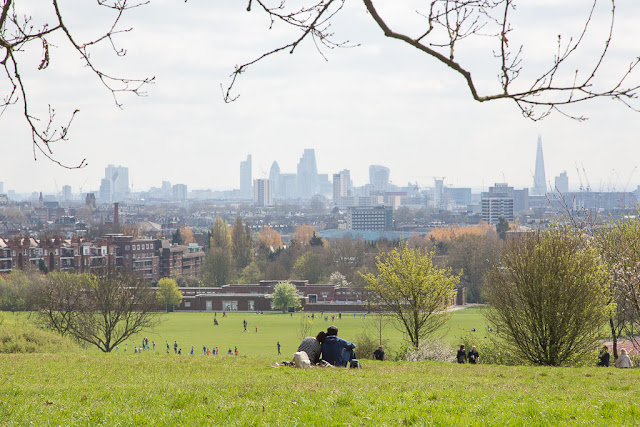 We've had unbelievably nice weather this weekend. Dave spent both days in the garden, converting the area around our roses into a full-fledged flower bed. He removed the grass and planted lots of new plants. (At my insistence, he worked around the blue forget-me-nots and the purple grape hyacinths, both of which are going gangbusters now.)

I stayed on the couch all day Saturday, trying to avoid this cold, but it caught up with me anyway. (It's not very severe -- just a bit of throat discomfort and fatigue.) I got lots of reading done, catching up on my New Yorkers and finishing "Where I Was From," by Joan Didion, her memoir of growing up as a Californian.

Yesterday I took Olga to the Heath, and we brought along her Jolly Egg, which I rediscovered while clearing out the garden shed a few weeks back. She hadn't played with it in ages but she got very excited when it first came out -- so excited, in fact, that I had to take it away from her for fear she'd roll it over Dave's new plants. The Heath is definitely a better place to play with the egg than the back garden.

(OK, that film won't win any Oscars, but let me just say it's incredibly hard to make a video while trying to wrestle a big plastic egg away from a 40-pound staffy.)

Olga's method of playing with it basically involves standing over it and barking. She can't propel it too well herself because it's so large, but loves chasing it when it's been kicked or thrown. She's a footballer at heart!

In the evenings, Dave and I have moved on to "Mad Men," which somehow we've never seen. It's finally available on Netflix here, and I love it so far!

(Photo: Parliament Hill, yesterday.)
Posted by Steve Reed at 6:47 AM