A Purple Tree and Good Teeth 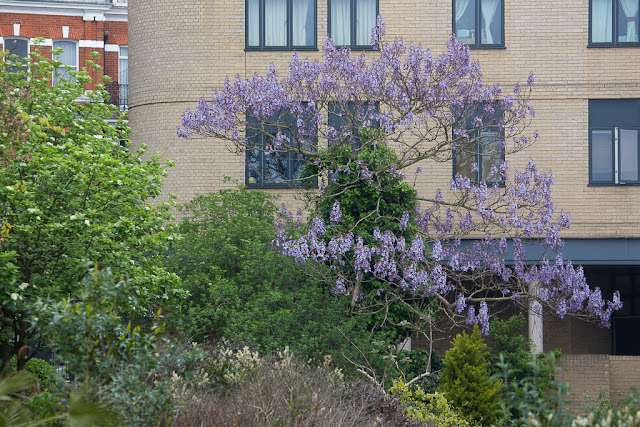 I see this tree on my walks with Olga every morning. It's in a locked courtyard in a housing development off Finchley Road, and I can't get in to get a closer look, but after doing some online research I've concluded that it's a foxglove tree (Paulownia tomentosa). Pretty!

At first I thought it was a jacaranda, but I can't imagine a jacaranda would survive London winters outdoors. 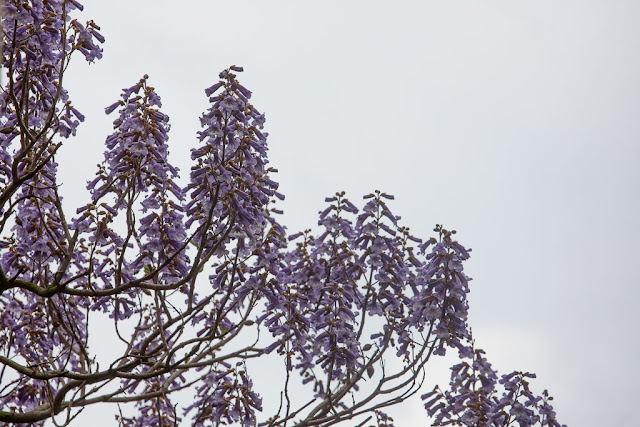 This was the best I could do with my zoom lens against that white sky.

Yesterday's trip to the dentist went well. No cavities, no problems requiring further treatment. I saw a different dentist this time -- he said my gums are healthy, but they bled a bit when he cleaned them, so he gave me a lecture about flossing and suggested I come back in 3 months for another cleaning (!) which I am not doing. Isn't it perfectly reasonable to think that if someone takes a metal hook to your gums they're going to bleed? If my teeth and gums are basically healthy I'll stick to my regular schedule, thank you very much. (Besides, haven't the experts concluded that flossing is of dubious value?)

After the dentist I took the tube to Holborn for a photo walk. I started out making a loop around Lincoln's Inn Fields, up Red Lion Street and around Gray's Inn, eventually walking all the way up through Bloomsbury, St. Pancras and Camden to home. It took several hours but I needed a good long walk, and I got plenty of photos to keep the ol' blog afloat!

Last night Dave and I went to a friend's pop-up restaurant -- he's a chef and he puts on these events every once in a while. The food was good but this time we sat at a big communal table, which isn't my favorite experience. Everyone was nice and the young German woman who I talked to most of the evening was interesting enough, but still, carrying on a conversation with strangers for a couple of hours wears me down.
Posted by Steve Reed at 7:02 AM

The more regular cleanings will prevent you bleeding, actually and prevent any problems with your gums from developing.

I doubt that many Africans floss. It's a western affectation. Like you I am not fond of big communal gatherings but I am going to a 60th birthday event this evening. Grooooan!

Love your tales about my (our!) adopted city.

That was a lovely walk. Having cycled around that area recently I was surprised to find "new" places. Places that had always been there but somehow I had overlooked them because I was either driving or on public transport. Funny what you find when you walk or cycle.

Have a great week.

I had no idea foxglove was a tree.

that is a beautiful tree. I know it as an Empress Tree. foxglove tree is another common name for it. they're from China. there is a house out here that has three or four of them, big trees but farther away than the one in your picture so even harder to see without trespassing and when I lived in the city a neighbor on the next street over had one.

Those darn dentists can think of all kinds of ways to cause pain and take all your money. I have insurance from work. We also have hygienists who do the work.

That tree is gorgeous. Any tree with purple/lavender flowers appeals to me. I did notice that the jacaranda are blooming here right now too.
I have a friend who is a chef who does the same thing. I think most of his business is for big corporate dinners or private affairs but he does these dinners for 10 people throughout the year. The first one I went to was in a building under renovations and my friend David and I had a table to ourselves. The second one was a big long communal table. At both the food was excellent.

According to the Mayo Clinic, oral health affects the whole body, including heart health. Here's a link if you're so inclined: http://www.mayoclinic.org/healthy-lifestyle/adult-health/in-depth/dental/art-20047475?pg=2

My gums get sore if I miss even one day of flossing, so it's just part of my regular routine now. It's kind of a pain, but it's more painful not to do it.

That lavender colour against the white sky is beautiful! But I'm biased - love purple, lavender, and blue shades in nature. Thanks for these lovely shots.

My gums bleed when I get a cleaning too, and I floss every day! I have teeth where food actually does get stuck, so it grosses me out to think about skipping flossing (although I was probably 35 before I started doing it regularly).

I love that tree! Purple is one of my favorite colors in nature (and pink, and orange, and yellow, and blue...).

E: It's not that I doubt the benefits of dental cleaning. But cleaning every three months is excessive. I have neither the time nor the money, and I suspect the dentist just wants to make bank.

YP: It IS a western affectation. Although a lot of Africans probably don't keep their teeth into old age, either, so I'm not sure that's the best example!

Cuban: One of my favorite activities is going for exploratory urban walks. You never know what you'll find!

Ellen: The weird thing is, I swear I've never seen these trees before -- in London or anywhere else!

Red: I wish I had dental insurance, but alas, I do not. You can get dental care through the NHS but it takes longer for an appointment and you don't get all the same cleaning. I just pay out of pocket.

Sharon: A pop-up restaurant is a cool experience, isn't it? It's like a little secret party.

Jenny-O: Oh, I don't doubt that good oral health is important, and I do floss, though not daily. My gums are just tight against my teeth, and they do tend to bleed a little when poked and prodded. I think it's perfectly understandable! As the dentist said, my overall oral health is good. So I'm not worried.

Bug: I don't understand the alarm some dentists show over bleeding gums. Unless there's excessive blood or evidence of pocketing or receding gums, I think a little blood is perfectly natural during a cleaning.