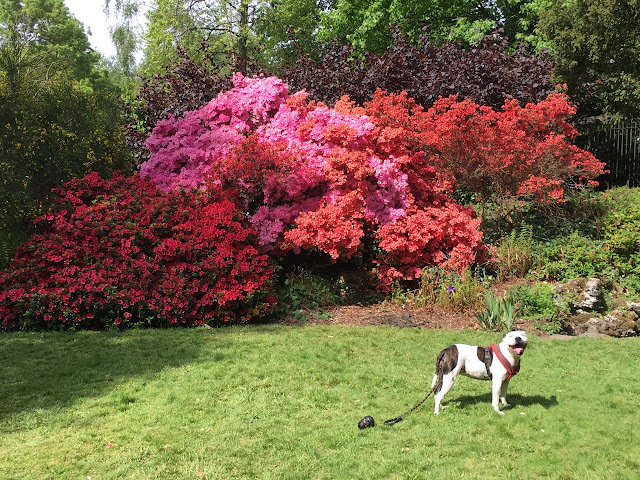 I'm sorry to inflict another dog-and-flower photo on you, but aren't those azaleas incredible?

Olga and I discovered them completely by accident while walking on the Heath yesterday. We were way up on the northern edge by Athlone House, and when we passed the gate to the gardens I saw a flash of color and decided to check it out. I'm so glad we did!

Athlone House has signs on the gates saying dogs visiting the gardens must be on a lead. But they don't say anyone has to be holding the lead.

Here's a panorama shot for full effect. Click to enlarge!

I hasten to add that I did hold Olga's lead when I wasn't taking photos. While we were there, she sniffed around a small, rocky pond beneath the azaleas. A man and woman passed by with a little furry, yappy canine on a leash, and the woman said, "Oh, my dog just fell in there!" Indeed, its fur was soaking wet.

The pond looked like it might hold a koi or two, so I said, "Are there any fish?" If there were, I thought, her dog probably gave them a shock. 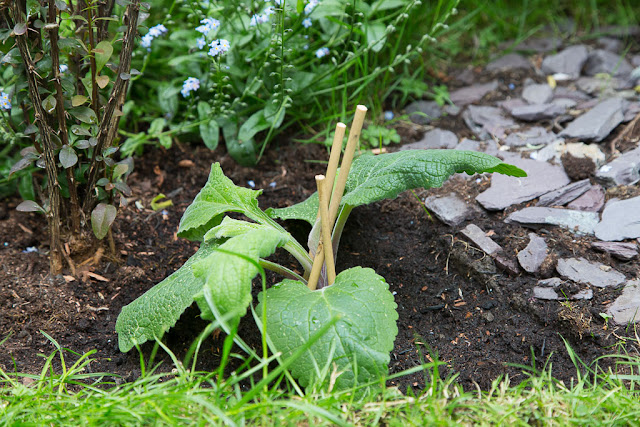 Olga and I walked about three hours. Dave, meanwhile, worked on the garden, planting all sorts of things he's purchased recently. After I got home, we put our rescued foxglove in the ground -- when we pulled it out of the pot where it was rooting, I was amazed to find a big ol' rootball! Clearly it's been thriving on the windowsill all this time.

We went to bed about 10 p.m., as usual, having watched a couple episodes of "The Leftovers" and "Mad Men." We were sound asleep when, at midnight, the burglar alarm went off. Now, this is a problem. Between you and me, we never use the burglar alarm, and it wasn't even armed -- when we looked at it the "tamper" light was flashing. So while it whooped and beeped and shared its rage with the neighborhood, I went scrounging around in our lease paperwork to try to find the code. No success. Finally we flipped the breaker that supplies power to the front door area, and that shut it off.

We kept hearing alarm noises, though, and we realized that weirdly, our neighbor's alarm was going off too! I think we all had a power outage -- our clocks are blinking this morning and need to be reset.

I have since found the code, so we'll be able to turn the breaker back on and resolve that problem today, hopefully. In daylight. When the neighbors might not hate us quite as much.
Posted by Steve Reed at 6:44 AM