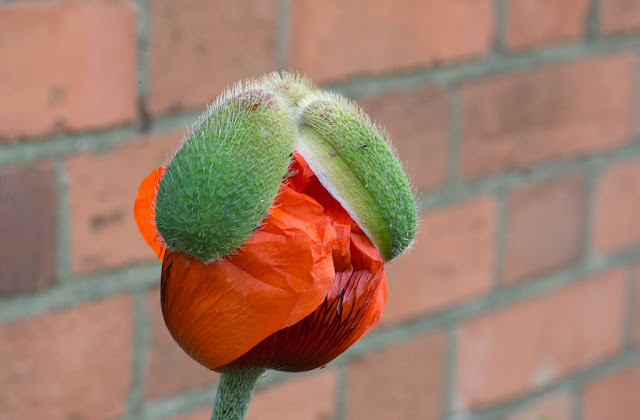 Among Dave's new flowers this year is a bright red oriental poppy. The plant has already grown much larger than the poppies we've had in the past, and it sent up a big stalk with a fuzzy bud at the end. A few days ago, the bud's outer covering broke and the flower began to emerge. 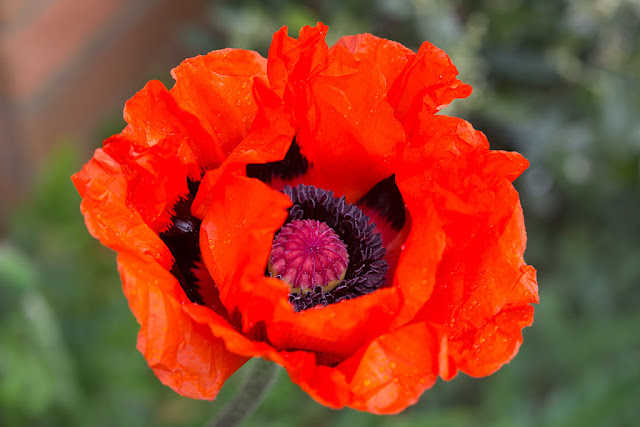 While bustling around the garden just a few minutes after taking that top photo, I accidentally knocked the pod covering off. Here's the revealed flower. 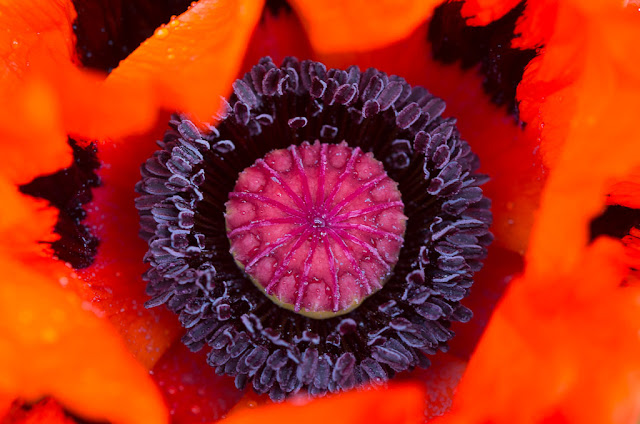 It's very Georgia O'Keeffe, isn't it? 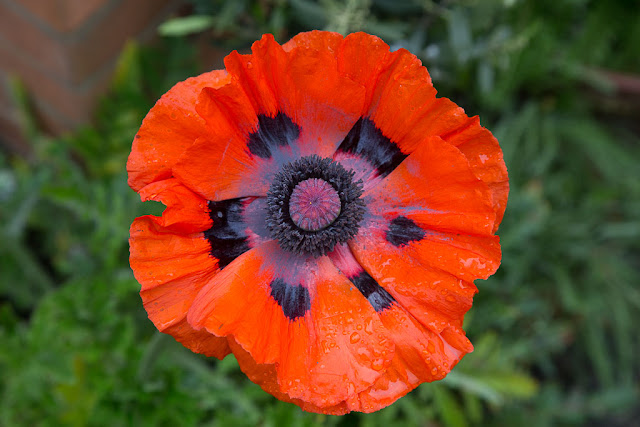 By the next day or so, the blossom had flattened out and looked like this. The petals are still hanging on as I write, despite some light rain. It's quite a spectacular flower, and we have at least two more buds coming!

Speaking of poppies, it looks like my celebrity poppy rescue failed. The plants look deader than a doornail. Oh well. It was worth a try.

In the department of petty annoyances, remember my recent conversation with Barclays bank? How they wanted to give us an "upgraded" account and I resisted, partly because I didn't want a new ATM card and all the complications that go with reorganizing our bills to use a new card number? And how the bank representative assured me I wouldn't get a new card unless I asked for one, and supposedly put a note on my account stating that I did not want a new card, thus talking me into the upgrade?

As my friend Tabatha from Alabama used to say, in what may be the most useful expression ever: "You gotta laugh to keep from cryin.'"
Posted by Steve Reed at 7:47 AM

It's not Georgia O'Keeffe...it's Steve O'Keeffe!

I love poppies. Mine have all gone by now though mine are the more common red ones but they put on a brilliant show for about a month or two.

I wish I could get my hands on some opium poppies. Is that wrong? One never knows when one might need some opium.
That poppy is gorgeous.
Banks will tell you anything.

That poppy is gorgeous. It's much prettier than the ones I see here.
The person at the bank you talked to probably had no idea how the new account worked but they were charged with selling it. That seems to be how they do business these days.

"Accidentally" knocked the covering off, eh? We believe you! It is a gorgeous bloom.

Banks, politicians, and investment dealers - don't believe what they say.

One of my perennial beds started a few years ago with about 5 oriental poppies spread among the other flowers. After their early spring bloom, the poppies die back, turn brown, dry up. I cut them back after blooming, to six or eight inches, but have yet to get a second bloom the same summer. Happily, even though the dead foliage can disappear, the following spring the poppies have multiplied several times over. Last spring they were stunning, so this year I expect quite a show! Aren't they beautiful?! -Kate

As for the bank. Say one thing, do the opposite.