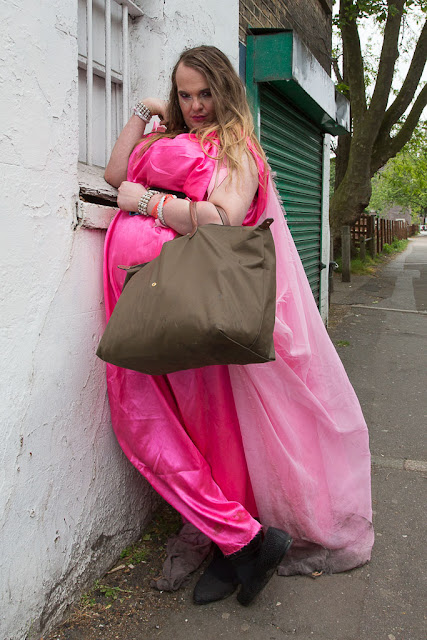 When I was in Vauxhall on Sunday morning, I happened to pass this person on the sidewalk. She was trying to call an Uber but not having much luck, and some guy was chatting with her but she didn't seem very receptive. I circled back, thinking I had to get some pictures, but the street was small and pretty much empty, and there was no way to do it candidly.

So I asked her if I could take her photo. She told me to wait until she was finished calling for a car. I helped her figure out the street address, and then the guy following her around began following me around, begging for change. I gave him some, much to her annoyance, and he went away.

She said her name was Society, and she didn't know that guy at all. 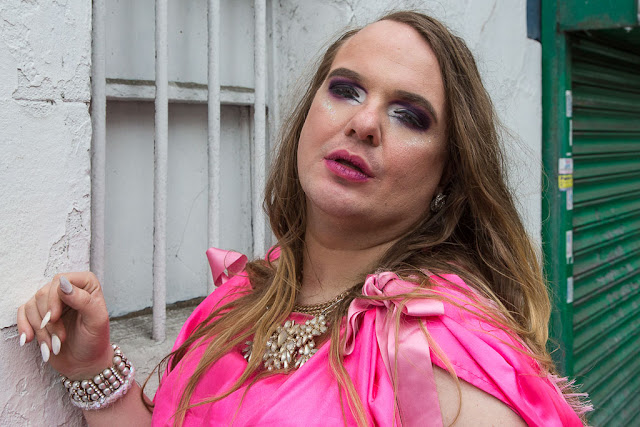 She seemed to be on her way back home after a long night out, and I loved the combination of glamour and fatigue that she projected. She was very kind in allowing me to photograph her. Her brown bag contained at least one wig.

I appreciated your comments yesterday about my crankiness (which is better today, thank you). I think a lot of it was fallout from having to deal with the bank. But as several of you said, the current political situation certainly affects all our moods. In fact, when I read that slogan on the cream container about "sharing our values," I took it as a veiled nationalistic reference, though I'm sure it wasn't meant that way. I think it probably just meant the farmers treat the cows well. My personal Brexit trauma gave it a darker cast!

(Admittedly, any time someone makes a reference to "values," I get squirmy -- not because I don't have them or believe in them, but because the word has been misused to justify all kinds of homophobia and xenophobia.)

And how do we feel about Trump's dismissal of James Comey? I don't think Comey's decisions a la Hillary were great, but his firing seems clearly motivated by politics. What's most troubling to me is that Trump is so blind to justice that he thinks it's permissible to fire the man heading an investigation against him. Shades of Nixon, indeed!

I worked more on library inventory yesterday, and got quite a bit done. I may even be able to finish non-fiction today. Woo hoo!
Posted by Steve Reed at 6:08 AM