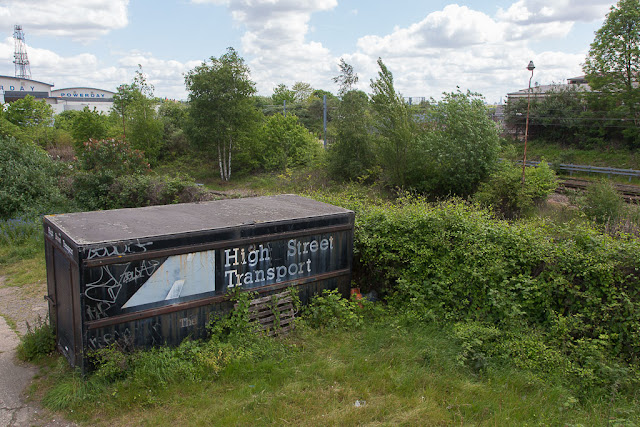 I gave the dog her promised walk yesterday, taking her to Wormwood Scrubs. We have to walk through a gritty neighborhood of rail yards, on bridges that span an octopus of tracks, in order to get to the park. But once we get there it's green grass all the way.

I thought I might find some interesting insects or butterflies at the Scrubs, as I have in the past, but I guess it's still too early. Maybe the cold snaps we've had in recent weeks put the insect world back to sleep. We've also had very little rain, and maybe that's slowed things down, too. 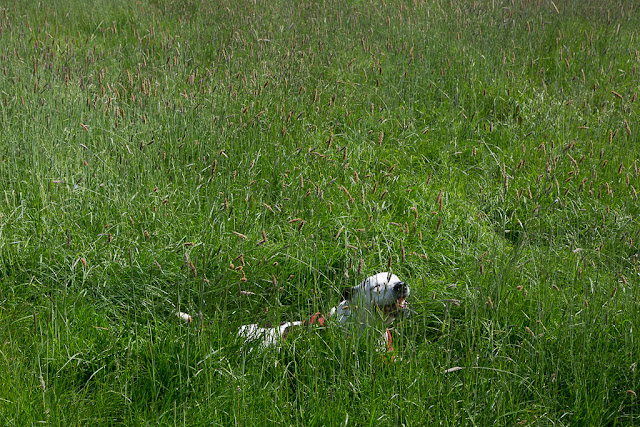 The grass is high, though, which is fortunate for Olga, the grass-loving dog.

Anyway, we did lots of walking, and while we did that, Dave spent some time in the garden. By late afternoon everyone was tired and the house looked like this: 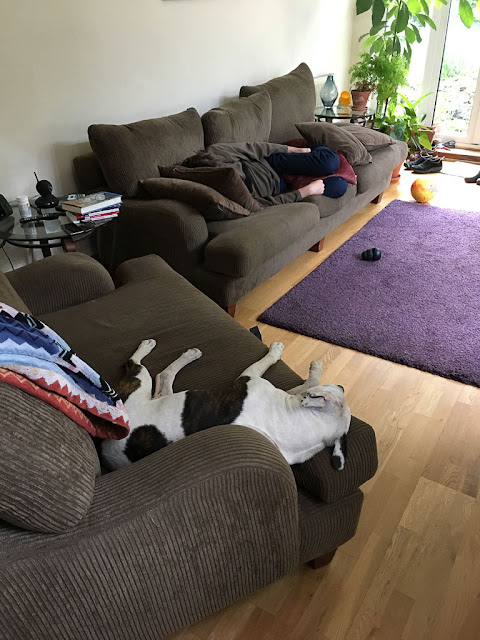 I sat amid the snoring and read "Lies My Teacher Told Me," a fascinating book about the failures of American History education -- the heroizing of Christopher Columbus, the Eurocentric perspective on the spread of knowledge and culture throughout the world, the apologetic treatment of the racist South in the Civil War, the failure to acknowledge class struggle. The author analyzed about a dozen popular history textbooks, and the conclusion seems to be that textbook authors and publishers deliberately distort history because they want to sell books to school districts that would bristle at anything too self-searching or accusatory. (Texas, in particular, is a huge textbook market, and many Texas school districts aren't going to like a serious examination of America's racial and ethnic biases.) His analysis occurred back in the early '90s, but he says in a foreword that things aren't a whole lot better today.

I Skyped with my mom, and we had some good laughs as I told her about my recent travails with the bank and the yard waste recycling. She's taking a class at her senior center about Thomas Merton, the Catholic writer, monk and spiritual seeker who wrote "The Seven Story Mountain." I once tried to read that book and I couldn't make heads or tails of it. But Mom says she doesn't have to read his books for the class, so she's off the hook. I guess it's more of a lecture.
Posted by Steve Reed at 6:41 AM