Why Am I So Cranky? 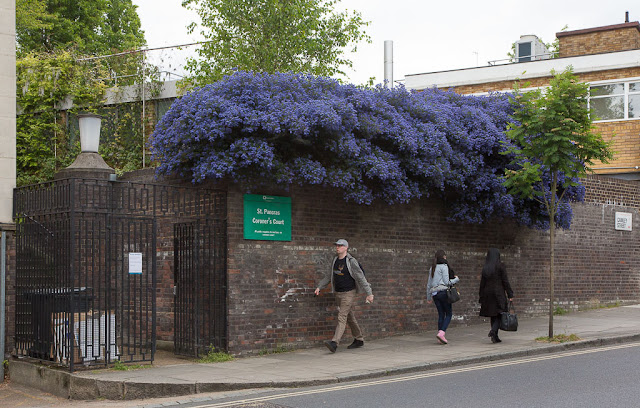 This morning, as I was making my coffee, I realized we're basically out of milk. There were about three drops in the bottom of the carton. I put those three drops in my coffee and scrounged around in the refrigerator until I came up with an expired container of single cream -- which fortunately wasn't too expired -- and I used some of that, too. Morning crisis averted.

When I opened the cream, I noticed that the package, underneath the Waitrose brand name, bore a statement that said, "Produced with care by farmers who share our values." Something about that statement annoyed me. How does Waitrose know my values? I could be an axe murderer -- all I did is buy their cream. There was no values test at the cash register. Or do they mean their values, in which case, why do I care?

Not only that, but aren't the cows doing the producing?

Maybe I am just especially prickly this morning. Yesterday I had to get in touch with our bank, Barclays, because out of the blue they sent us a letter saying they were upgrading us to a new kind of account. They made it sound fabulous, of course, involving rewards like free coffee at a certain chain of pastry stores, but I was wary. Does this new account come with fees? A minimum balance? They said they were going to send me a new ATM card, in which case, would I have to re-authorize all the billing that goes through my existing ATM card? Gawd!

So I called Barclays on my lunch break, and at first I couldn't even get past their security questions, which are so specific that unless you're staring at a statement, you can't answer them. Which made me even angrier, because I didn't want to have to make this call in the first place, and I'm afraid I gave the guy on the phone an earful. I called back in the evening, statement in hand, much calmer, and ironically, in the end, the bank eased my concerns and I assented to the upgrade anyway.

At work we're doing library inventory, which means scanning the barcode on each and every book. It may sound tedious, and it's complicated by a laptop computer that occasionally drops its connection with the school wi-fi. Shifting the books on the shelves can be hard and dusty work. But I like the task -- it lets me stand quietly in the stacks and think about things while the bar-code reader mindlessly beeps-beeps-beeps over each volume.

(Photo: A big ol' blooming bush, which Dave tells me is called "California lilac," near St. Pancras.)
Posted by Steve Reed at 7:00 AM

The very air we breathe these days over here seems cranky. What's happening in our country is mind-boggling and incredibly stressful almost constantly. I don't know what the answer is, but I do love that purple tree!

What a load of blather about caring farmers and shared values. As for bank, the use of the word upgrade was no doubt meant to think you were a special person. More like an account transfer to suit them and how much will that cost you?

Can you tell I was in a bank this morning telling the bank staff I was less than impressed with their move to a new building and lack of ATM access outside bank hours? As if they care.

I'm with Elizabeth. I feel as if we're all mentally unstable and I don't know what's to be done about it.
I think the cream company is talking about their values which I feel certain including caring deeply about their cows and the planet. Etc.
AS SHOULD WE ALL, RIGHT? Which means buying the proper brand of products which means more decisions which means...we're all crazier.

That line about values On the milk carton strikes me as an empty platitude (what exactly are their values anyway?) at a time when we need focused and active resistance. I understand your crankiness. I'm feeling it too.

I'm sure your day improved. Unsolicitated offers are something to be wary of.

all just empty words to make you want to buy their product. some days we are cranky for no reason. maybe a change in the air pressure or something. remember bio-rhythms? I used to blame day like that on that, all my bio-rhythms were down at the same time. nice you have a soothing task at work.

I don't blame you for not trusting the bank and that's coming from someone whose whole career was in the banking industry. I just feel like they've gone off the rails recently. You would have plenty to think about if you were here in the states. With the firing of the FBI director yesterday, the news has gone crazy and we all left wondering what the hell is going on....this time.

My inner cranky old lady has been coming out to play quite often lately, and I am left wondering why, too! I keep thinking this is what it must be like to be a young man filled with testosterone - I just want to punch somebody, some days ... Then I generally cry, and it goes away a bit. Have you tried punching/crying? :D

That purple bush is really lovely.

The short answer is, like many of the rest of us, you have less patience with bullshit as you age and your bullshit meter has been working overtime.

I live in California and those lilacs grow wild all over here in the valley. Very hardy and drought tolernant!

Ooh I love that lilac! I always blame my crankiness on my hormones, but I guess that doesn't work for you. Ha!