The Biggest Slug Ever 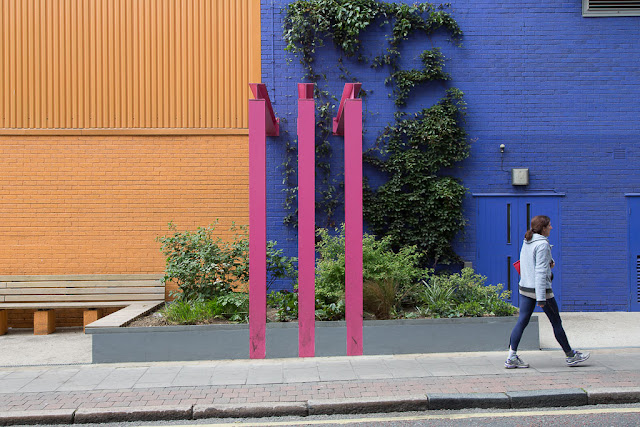 Dave's nieces arrived just fine, thank goodness. After their plane took off from Chicago I had all sorts of nightmare visions of them getting to London and being unable to figure out the Heathrow Express or not having any money or losing their passports, and not having working phones, thus being unable to text or call us. Fortunately, as is often true with nightmare scenarios, none of that happened. Dave met them at Paddington without a hitch.

They got ribbed at passport control by the UK border guard, who told them that saying they're "on vacation" is inappropriate, because "vacation" comes from "vacate" which means leaving, and they'd just arrived! Instead they're "on holiday," he told them.

It's probably a standard line he uses for every American who passes his desk.

Last night we went to the Black Lion, our neighborhood pub, where we bought them dinner and a pint, though I had a creeping fear that their parents would frown at us buying them beers. (Even though they're in college, and of legal drinking age in Britain, and they assured me these were hardly their first beers.) "Are you kidding?" Dave said. "My family would demand that they drink." 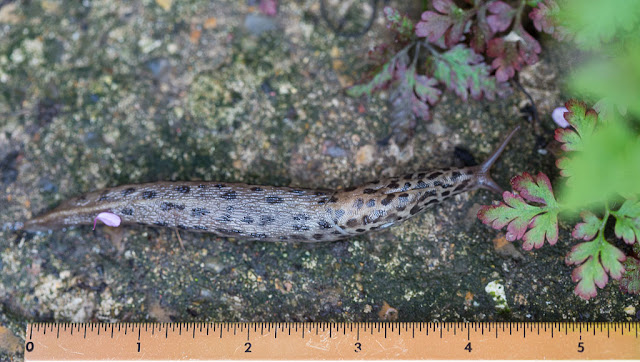 I have to show you this crazy garden slug I found yesterday morning. It was so huge I actually ran to get my grandfather's old General Electric engineering ruler for comparison! That slug is coming up on five inches long. It's practically a snake! I let it go on its way because it was in the alley at the side of the house and not really near any vulnerable plants. (Though I hear slugs and snails can travel remarkable distances fairly quickly, so I may regret that decision.)

Work was crazy busy yesterday. We have lots of students doing year-end projects of one kind or another, and for those projects, of course, they need books. In many cases their classes are meeting in the library, too. And I'm coming to that time of year when I'm trying to prevail upon people to bring back overdue materials and return everything before summer -- and instead these kids are checking things out. It's like holding back the tides!

I suspect that deep down, many librarians would be happiest if no one ever checked anything out, or ever touched the shelves, or ever read the books, dog-earing the pages and cracking the spines. The irony! This is why librarians are often depicted as cranky. There's an inherent conflict between our organized personalities and the public disorder of the job. (Especially in a school!)

(Top photo: Near London Bridge station, a few weekends ago.)
Posted by Steve Reed at 6:38 AM

At "The Black Lion" did you opt for the goat's turd & celeriac tart?

I am glad that the girls arrived safely and hope they have a wonderful time in London and elsewhere. It's good they have a homely base complete with guard dog.

As for your 5 1/2 inch London slugs, up here in Yorkshire most slugs are 8 or 9 inches long and very fond of Violets, Petunias and Daisies.

Glad your extended family arrived without a problem. As for the slug, wow...

well, look at it this way, without the chaos of people checking out books you wouldn't have a job.

Ellen: Exactly! I know it's ridiculous but I'm willing to bet a lot of librarians feel that way! I wouldn't say I feel that way all the time but I certainly have my moments...

You know, I never thought of it being that way with librarians but you're probably exactly right! It is rather a miracle that as many books get returned in decent shape as they do.
Glad Dave's nieces got there without a problem. I know they're going to have the best time. Does Olga adore them?
If I saw that slug I'd...well. Sometimes I find earthworms so long that they are practically snake-like. A little freaky.

I can't stand slugs. Ugh! I'd have run from yours!

Librarians work very hard and they promote so many things such as reading for fun, research and much more. My favorite excuse from a kid was, "I can't find my book but it's not overdue!"

I'm glad your guests arrived without a hitch. I remember how easy it was to locate the Heathrow Express so I was sure they wouldn't have any trouble. That slug is enormous!

I laughed at your comment about librarians vs the reading public - if I was a librarian (which I did consider in my youth) I would certainly have those feelings. I've heard housework described as being like putting beads on a string with no knot on the end, and that's pretty much like the borrowing and returning of books, I think. Although a librarian is much more than that, too, so maybe that helps?

How would you even, erm, *dispatch* that slug if you wanted to? Just the thought of it makes me want to gag! Hopefully he went to eat someone else's flowers!!

I was once told off by a stern faced (female and elderly) librarian for making too much of a sliding noise when I put a book back onto the shelf. I was sufficiently horrified and have been a silent slider for years now.

Half a lifetime agon, I worked as a bookseller and ever since, I am tidying up the shelf display in bookshops anywhere whenever I see chaos. I suppose I'll never get rid of that instinct.
Do you have something similar, I wonder.

That slug was lucky. My man crawls through the vegetable garden every night before bedtime with his torch, killing slugs.

Just as well you let that slug go. I can assure that some bird already had its eyes on it. The minute you turned around, the slug became (to paraphrase Monty Python) an ex-slug. :-)

And I thought my slug was the biggest. I even told my daughter it was. :) Why didn't I weight it??? Lol.

I'm curious. What would you have done had you chosen to capture it? I've never seen a bird eat one, and don't think I haven't encouraged them.

About what we do to books? What's so wrong with books showing a little use and wear? If we treated all books too gently, bookmakers and booksellers would starve. People who learn to love books never mistreat them. They just love 'em to pieces. I retired my library card the year we got the Internet, and two bookstores joined our community just minutes away. I love books and love having my own. I finally have too many! Oh, what a feeling! My cup runneth over. :)

I wish I was in London to enjoy the good times at that pub.

Your dinner and a pint outing with Dave's nieces sounds fun! And that's a fascinating observation about the detail oriented nature of librarians and the rowdy public! Ha!

I'm sure the border guard (customs officer?) is related to Yorkshire Pudding and I'm very surprised he did not comment on this paragraph.
And I laughed out loud at the last paragraph; I was in the library when I read it.
That slug is so slimy and creepy.