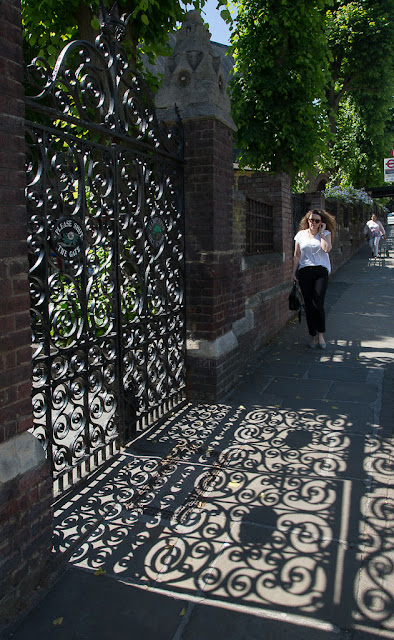 I went to the Royal Free Hospital yesterday to deal with that lingering spot on my forehead. Here's what I imagined would happen: I would walk into the clinic, be seen by a dermatologist who would quickly zap it with some liquid nitrogen, and I would leave.

That is not what happened.

Instead, I was told to get entirely undressed and put on a hospital gown. Then I was seen by a dermatologist who examined not only my forehead but everything else, too. (No other suspicious spots, thankfully.) Then the dermatologist, who agreed with my GP that I seemed to have a small basal cell carcinoma, said that I would have minor surgery, probably that same day, to remove the spot. I asked whether they could freeze it off, and she said freezing wouldn't allow them to get enough "margin" so surgery was required.

Then she said she wanted to confer with a colleague, and left the room. In came a medical photographer (!) who took photos of my spot with a variety of lenses. I signed a form saying they could use these photos not only for my records but also, I think, for instructional purposes.

The dermatologist returned with her colleague and a visiting doctor from China (!!). All three of them examined my spot. The colleague advanced the theory that it really was just a keratosis, and not a basal cell carcinoma at all. He suggested doing a "punch" biopsy, removing the lesion and testing it. If it's a keratosis, nothing more need be done. If it's a carcinoma, I'm supposed to go back for the minor surgery.

So that's what happened. Local anesthetic, and now I have two stitches and a star-shaped bandage on my forehead, and the lingering possibility that I'll have to go under the knife. I still don't really get why they couldn't freeze the thing off, because I'm pretty sure that's what happens in the states, but I'm not a dermatologist so what do I know?

Everything is complicated, right?

When I finally got to work, with a gauze pad and "plaster" (aka Band-Aid) over my star-shaped bandage and stitches, the kids were very concerned. It was nice to be asked whether I was OK. Made me feel appreciated! "Routine dermatology," I shrugged. 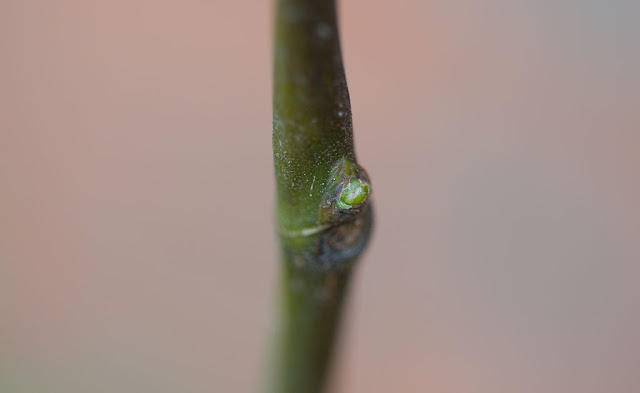 Here's the good news of the day -- the rescued fig tree finally, finally seems to be doing something. Tiny, tiny little nubs have appeared along the branches. I'm sure these are leaf buds. Stay tuned!

(Top photo: An ornate gate near the Royal Free Hospital.)
Posted by Steve Reed at 7:33 AM

Sounds like the NHS are giving your little "growth" proper and well-informed consideration. Perhaps some growths can be frozen off but others may not be suitable for such a process. You should have told the kids that you had fought off a a gang of muggers.

If it is a carcinoma, they want to make sure they get clean borders- meaning they know they got the whole thing. It's probably not even a carcinoma but what a lot of trouble for such a little thing.
Oh well. Better that than not having it attended to.
Yay little fig tree!!!!

The possibilities in some of these matters can keep us on edge. the idea that it's minor gets drowned out by the worst case .
.

so, I've had both. actinic keratosis and basal cell carcinoma. the keratosis can be frozen off and I have developed on one my forehead I need to get treated. but the basal cell carcinoma goes deep and wide. they did the same to me for the one on my nose...took a scoop and sent it for biopsy but did not require stitches. on my return visit, the doc told me that it wasn't a clean plug, meaning that they did not see healthy tissue on all the margins and so local anesthetic again and she cut deeper and then closed that up with two stitches. the lab results of that came back that she had got it all.

and yes, the fig is showing life!

As you know, Gregg had a spot of BSC on his forehead almost exactly like yours. They cut a big deep chunk out (sorry...) to make sure they got enough margin. He had two sets of stitches, inside and outside (???) or so the staff said. There were 6 visible stitches on the surface. It was a little sore for him, but nothing Tylenol wouldn't fix.

Interesting conclusions on the basal cell. It sounds like they are being very thorough. I've had several removed by freezing but, I have had two removed surgically. The one that appeared on my face all those years ago was removed surgically. My GP was uncomfortable performing the tiny surgery on my face so she sent me to a dermatologist who looked at it and said it was nothing. He said he could do a biopsy it I wanted but I could tell he didn't really want to. I insisted because I new my GP was very good at diagnosing things. So he did the biopsy. Then he called me back and when the doctor came into the room, he said "Who told you this was a basal cell?" I told him my doctor's name and he said, "well, she's very good because it is indeed an basal cell carcinoma and it has to go right now.". I never went back to him because he was so rude and dismissive on my first visit how could I ever trust him. Since that time I had one more removed surgically on my back. My GP did that one because it wasn't on my face. Since that time, I have an annual visit with a dermatologist just to be checked. They usually always find something to freeze off.

It's good that the doctors are being cautious and thorough. You don't want surgery if you don't have to have it; but you sure do if it's warranted.

That's a beautiful shot of the gate shadows, and just as beautiful a shot of the new branch buds on the fig tree. New life is so tender and lovely.

Don't you dare to get worried about this 'pimple'. I've had so many removed I've lost count. I daren't even look at my back, I have so many mole (Beauty) spots, that I would never be able to spot any changes. I've given up worrying now. I can't waste any more of my life sitting in hospital waiting rooms, and waiting for biopsy result.
I'm 71, have waist length lilac coloured hair and if I want to wear my boho clothes while sitting in my beautiful English country garden, then I will., and no doctor's going to bring me down! Peace and Blessings

PS both my rescued fig trees are doing well, despite being beyond recall last year. I am so thrilled. I just hope my lilac hair doesn't finish them off"

Sorry to hear about the spot. Good they were able to do something about it quickly.

Beautiful photo of your fig tree. :-)

At least you know this spot on your forehead is the only thing that needs attending to. Hopefully, you're done, no margin surgery necessary.

I've had "stuff" removed, and they don't freeze it anymore, it seems like -- they do more cutting. Ugh. I hope it's nothing. I have to tell you, though, that when I scrolled down to the fig tree, my first thought was that it was a picture of your spot, and I sort of recoiled. I'm glad that it's the fig tree showing signs of fruit!

What a performance. However everything should be considered and taken care of appropriately - see Sharon's cautionary tale about being dismissive.

And what a wonderful photo of the gate - the sun has to be in just the right place to get sharp shadows as those in your photo.

I'd take a biopsy over freezing any day. Freezing is for warts.

I had an unexpected biopsy done on a spot along my inner thigh once. The nurse, also a co-worker, instructed me to take off my slacks and cover the rest of me with a paper sheet. Had to explain how I did not wear undies with panty hose. There was less judgment when I had to bare my right breast for a biopsy and removal of enough tissue to fill a specimen jar. Four biopsies and a single freeze later, I am thankful that all I have to show for the invasions and freeze are minor scars. Be well.