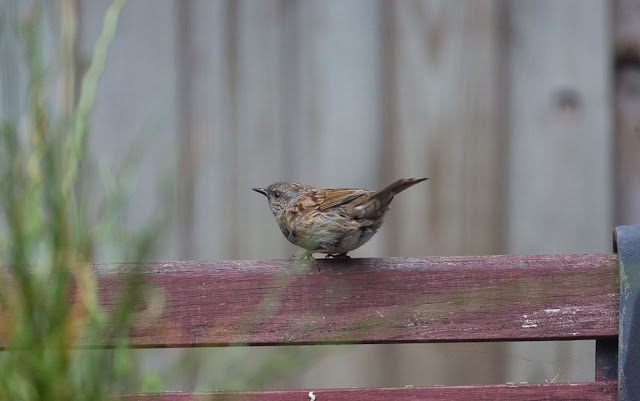 Last night, as Dave and I were watching TV, we noticed two little brown birds swooping through the air over the patio, one hot on the tail of the other. They would perch on the fence, flit down to the ground, forage through the low garden growth for God-knows-what, and then pop back up to the fence. And then chase each other some more.

They moved so fast I have no idea whether one was consistently the chaser and one the chasee. I couldn't even get a picture of the two of them together.

I'm assuming that this was either a courtship dance or two male rivals duking it out. The birds are dunnocks, small brown and gray critters found almost exclusively in Europe (including the UK, Brexit or not). 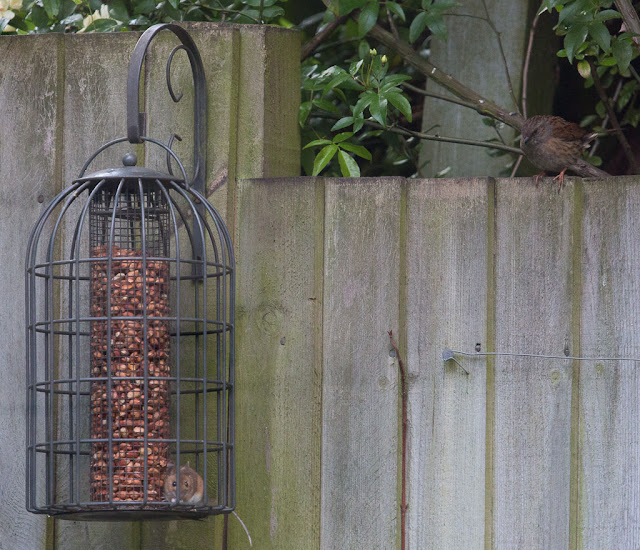 Here's one perched on the fence, watching as Martin the mouse raids the peanut feeder.

Apparently they're quite adventurous birds. Females may mate with multiple males, and the males have a system to rid the females of a rival's sperm before mating with her. They also sometimes mate with multiple females. Dunnocks are the swingers of the bird world! (Check out this article if you're interested in the details.)

It's Wild Kingdom around here.

In other news, I was interested in the kerfuffle over Ann Coulter's speech at Berkeley -- the one that got rescheduled and then cancelled because of threats of violent protests. Although I personally loathe Ann Coulter and don't see much value in what she says, she ought to be able to speak, and protesters ought to be able to protest her appearance. It's the violence I don't get. The USA is a civilized society (supposedly) founded on the ideals of free speech, right? Why do people -- especially groups from off-campus -- feel the need to take things to a physical level? I don't fault the university for postponing the speech, and I don't fault Coulter in this dispute, even though she's politically abhorrent -- I fault the protesters for creating a dangerous environment.
Posted by Steve Reed at 7:03 AM