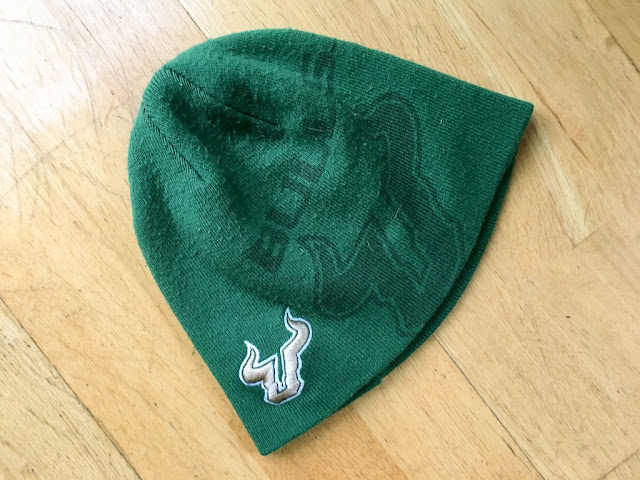 Yesterday morning, as I was walking Olga, we came to an intersection. Rather than turning right, which we always do at this particular corner, Olga was very insistent that we walk straight, along very busy Finchley Road. I never really like walking along Finchley Road, but I gave in. So we walked a few hundred feet and there, lying on the ground, was my hat.

Now, this is very weird, because I hadn't even realized my hat was missing. I had a vague idea that I hadn't seen it in a few days, but at this time of year I don't really need it so I didn't give it much thought. There's no question, though, that the hat lying on the sidewalk was mine -- because who else in my neighborhood has a beanie bearing the logo of the University of South Florida football team?

I haven't walked on Finchley Road for a very long time. I think I must have dropped it on the side street where Olga and I walk almost daily, and it made its own way around the corner -- in someone's hand, or via the wind, or something. It was a little the worse for wear -- torn open on the top, in fact --  as if it had been run over by countless cars. But I brought it home and washed it and sewed up the top seam, and it's as good as new. (Well, OK, not that good -- but as good as before I lost it.)

When I told Dave this story, he looked at Olga and said, "Good job, Lassie!"

I'd like to think Olga wanted to walk along Finchley Road because she somehow knew my hat was there. But honestly, that's just too crazy to believe. I think it was a happy coincidence.

At the risk of exhausting you with dog news, here's Olga on our neighborhood basketball court yesterday morning. We found two balls there -- both already punctured, thank goodness! She had fun chasing them around, and I let her bring the football home. In a sure sign that she is slowing down a bit in middle age, she has not yet torn it apart. It's sitting right in front of me, on the floor rug in our living room.

Otherwise, there's not much to tell about yesterday. I read, did laundry, poked around in the garden, took Olga to the West Heath. We're back to some fairly chilly, cloudy weather this weekend, so there will be no basking in the spring sunshine, unfortunately. In fact, I may need my hat!
Posted by Steve Reed at 7:29 AM