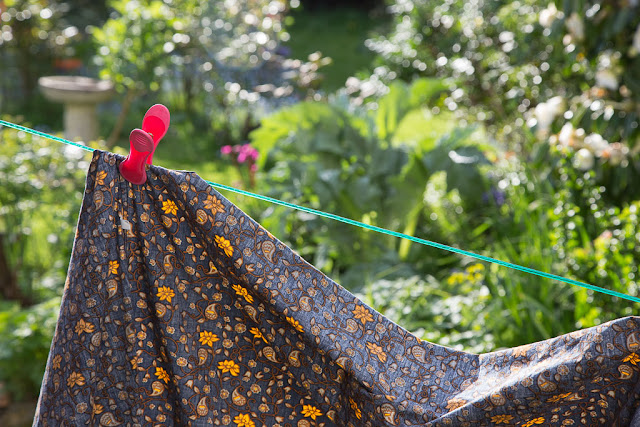 Olga is starting this Easter morning in a bit of gastric distress. She's out in the yard eating grass again. That dog -- I don't know what she gets into, but sometimes her stomach is tied in knots. I think it comes from drinking out of the birdbath, but just try to stop her!

We're having a low-key weekend around here. No rabbits, no jelly beans, no egg hunts. I did laundry yesterday and hung it out to dry in the intermittent sunshine. The photo above was my attempt to contrast the flowers on my shirt with the real vegetation in the garden.

That shirt, by the way, has a label from Structure, a store that I used to love and where I bought a lot of clothes as a younger man. But I bought it at a Salvation Army store in Tampa, and I consider it one of my prize thrift store purchases. Literally every time I wear it, I get a compliment. Don't you love clothes like that?

Dave and I went out for breakfast yesterday at a neighborhood cafe we've been wanting to try. It's a very no-frills breakfast-and-lunch place, popular with road workers and builders and other working guys. (And they were all guys, at least while we were there.) You can't get eggs florentine and it's not going to win any culinary prizes, but for plain ol' bacon and eggs it was great.

Then I took Olga to the West Heath. The bluebells are out in the woods, patches of purple on the shady forest floor. Olga ran and ran. She didn't get out much while I was in Newcastle -- her dog walker didn't come on Friday because it was a bank holiday -- so she really needed it. I'll probably take her out today, too.

While I was holed up in my hotel room in Newcastle on Thursday night, I finally had a chance to watch a movie I've been meaning to see -- an old TV dramatization, from 1981, based on the National Guard shootings at Kent State University about a decade earlier. I remember watching it when it was first broadcast, but I was never able to find it later on VHS, DVD or streaming video. Finally, browsing online, I came across a rather low-quality posted version. It wasn't bad, and I remembered quite a bit of it from the first time around. The cast included a very young Ellen Barkin.

Also in Newcastle, I got my first new pound coin! It was in my change when I bought my bus ticket to see the Angel of the North. I meant to take a picture of it but of course I spent it before I had a chance. They're very shiny coins, at least at this new and fresh stage. Apparently they're much harder to counterfeit than the older coins, a ridiculous proportion of which (1 in 30) are said to be fakes. I don't know what metal the old ones are made of, but they're pretty heavy and make a rather distinctive "clack-clack" sound when they knock against each other. These new ones, on the other hand, are lighter and supposedly even include a hologram, but it wasn't obvious to me.
Posted by Steve Reed at 6:39 AM