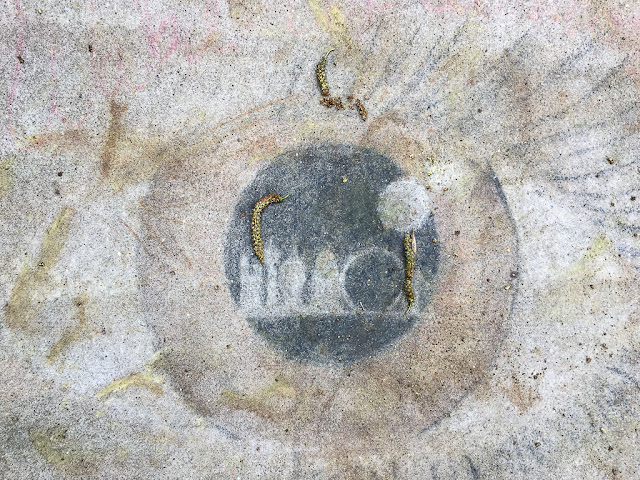 I was walking home yesterday when I found this eye drawn on a sidewalk. I wish I'd seen it when it was fresh as it's very faint now, but it looks like that's supposed to be the London skyline reflected in the pupil. Pretty cool!

Just as I was sure that winter was done with us, we're getting more. Temperatures are supposed to get down to 30º F (-1º C) tonight and the same tomorrow night. No snow, fortunately, but the skies have been gray and I'm seeing mostly clouds in the immediate forecast (and rain later next week). We are not amused.

I brought in all the geraniums again, and I suppose we'll cover the banana and the tree fern over the weekend.

I am also sick of wondering about my Covid vaccine. Another co-worker younger than 50 with no underlying health conditions was invited to get hers, and I've still heard nothing. I'm feeling quite ornery about it. I want to wait my turn, and I don't begrudge others getting their shots, but I don't see why other doctors' offices seem to be processing their patients much more efficiently. I also have the irrational fear that if I inquire again they'll put me at the bottom of the list out of spite! So for now it's a waiting game.

Dave and I are still watching "The Expanse" and "The Walking Dead." I like "The Expanse," while Dave (who usually loves sci-fi) is less enthusiastic. It is a bit hard to follow at times but it's never dull. "The Walking Dead" is excellent and suspenseful but quite gory, as you'd expect from a show populated by flesh-eating zombies. (I was going to say it's a nail-biter!) The ensemble cast and the characterizations are excellent, and I can see why it has such appeal. We often watch it right before bed, which might not be the best idea because, yes, I have had zombie dreams.
Posted by Steve Reed at 6:23 AM