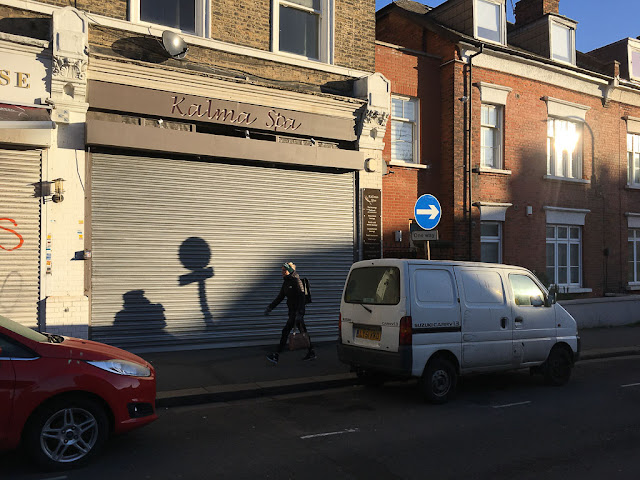 As you can see, our part of the world is slowly getting sunnier. The light is warmer and brighter, the shadows more striking.

You'll be glad to know my phone seems to be working fine after its creek-dunking and subsequent dry rice immersion. I'm not sure whether the rice made a difference or if it would have dried out on its own anyway. Guess there's no way to tell. I haven't used it for an extended period of time yet, but the basic apps seem to open and do what they need to do, even iTunes.
Speaking of iPhones, how about another round of random phone pictures from my walks around town? 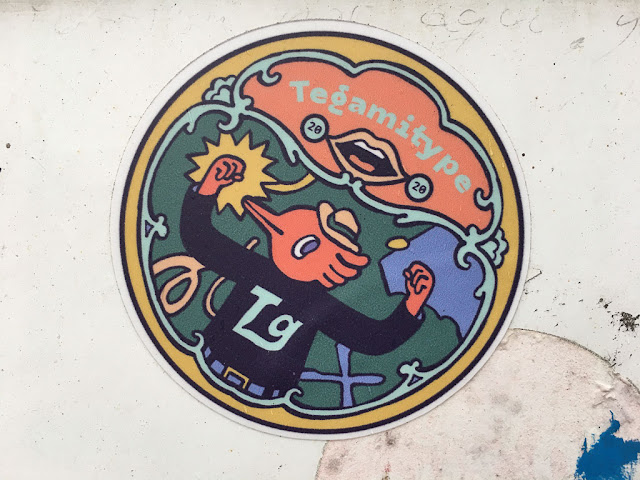 I found this sticker on a street sign on Abbey Road. Tegamitype is a typography studio in Indonesia. I don't find anything as groovy as this design on their web site. Maybe it's an old sticker. 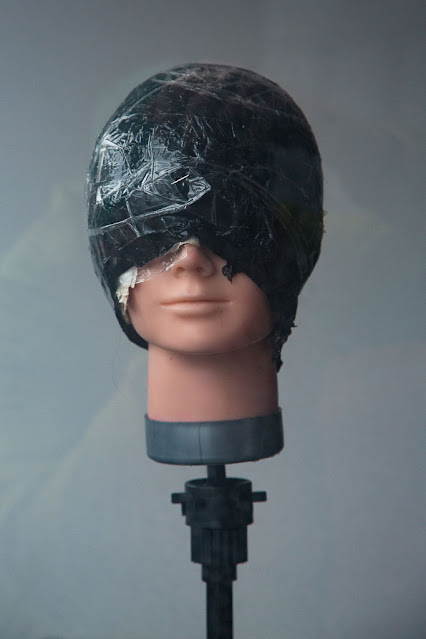 This was in the window of a closed hairdresser's salon in Childs Hill. It looks like a homemade bondage device. Maybe they put wigs on this head to style them? Alarming! 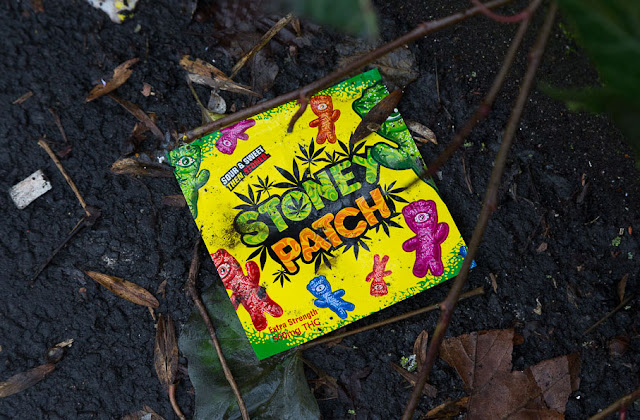 "Stoney Patch" is cannabis gummy candy. As the package says, "Sour & Sweet, then Stoned." These have made a splash in the news, with a copyright infringement lawsuit and bad reactions from kids who eat them thinking they're conventional sweets. One parent said of an incident at a London school, "A bunch of year 9s took some cannabis edibles and passed out, and there was a lot of throwing up at lunchtime." 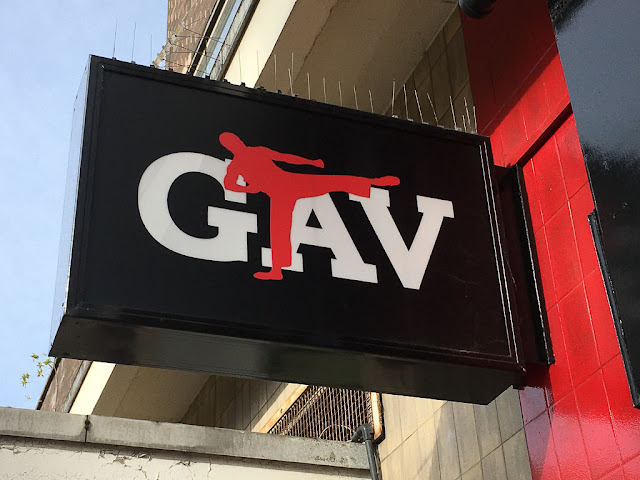 This is a kickboxing studio in South Hampstead called "Gav the Champ." I took a photo of its sign because I have a friend named Gav and I thought he'd be amused. 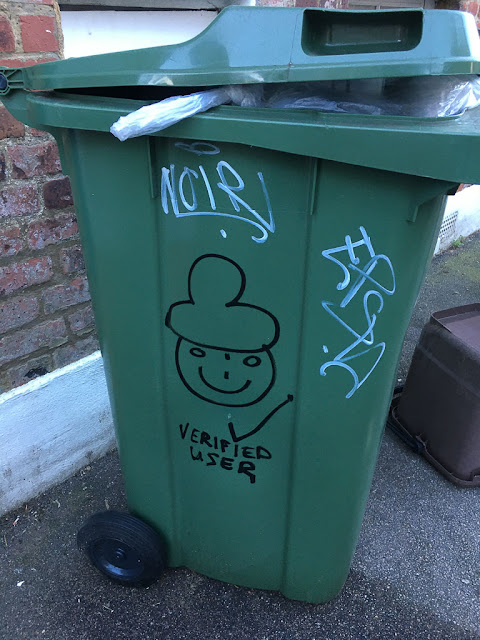 I'm glad the user of this wheelie bin has been verified. 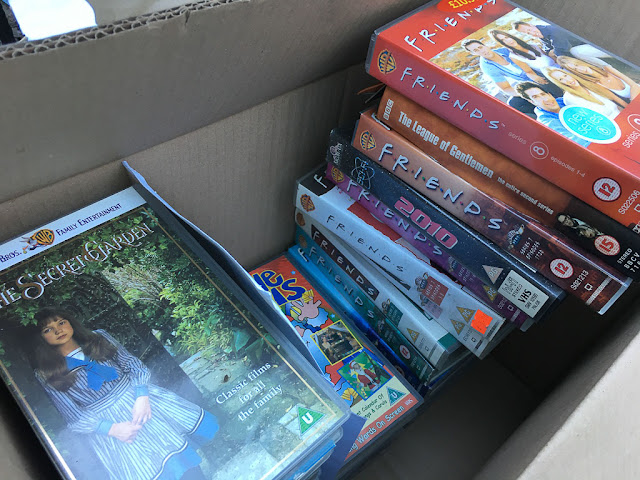 Free videotapes set out with someone's trash. Anybody want the entire back catalog of "Friends"? (No, I did not rescue them.) 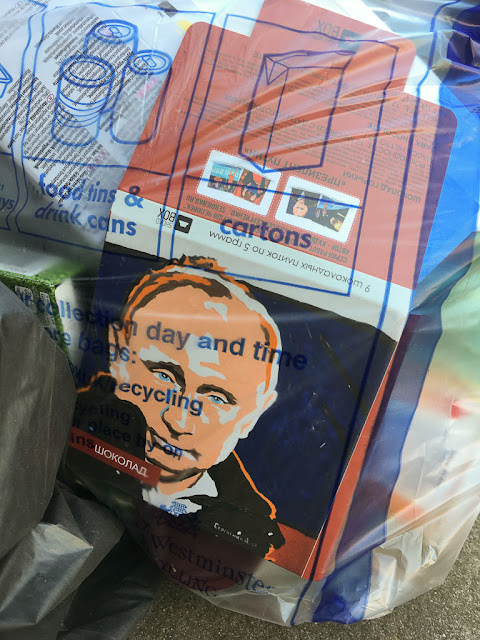 This image of Vladimir Putin was staring out at me from someone's recycling bag. Turns out it's a cardboard chocolate package from Russia featuring an image of Putin crying, based on a painting by Alexei Sergienko. "Kind-hearted man," the web site says. OK, then.
And finally... 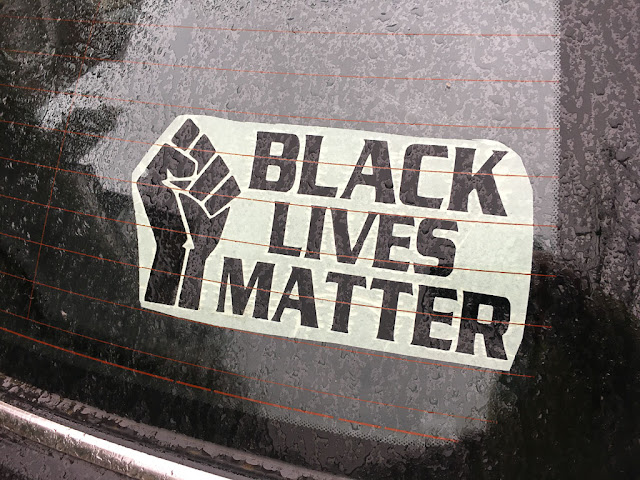