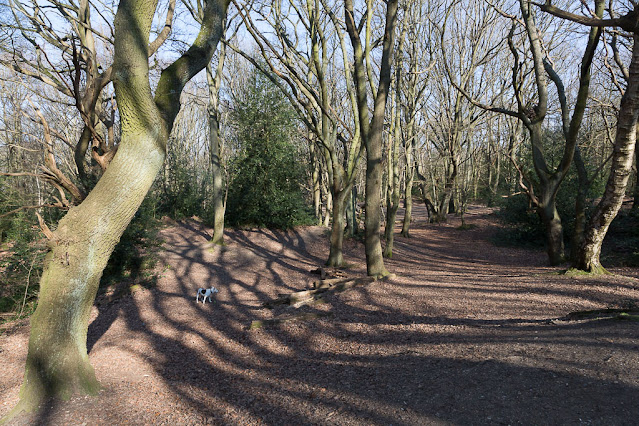 We took maybe the slowest walk I've ever experienced through Hampstead Heath yesterday. Our old girl Olga, who used to race beneath the trees in long running loops and leap over logs with abandon, now ambles at a more subdued pace. She still takes off after squirrels now and then, but increasingly, the squirrel has to be within ten feet and holding a sign that says "CHASE ME."

Age comes to us all, I guess, but part of the problem is also that I temporarily stopped giving Olga her anti-inflammatory medicine. It seemed to be making her sleepy and upsetting her stomach, so she had a drug holiday for a couple of weeks. Now it's time to go back on the Metacam, though, because she was very subdued yesterday and obviously stiff in the joints. 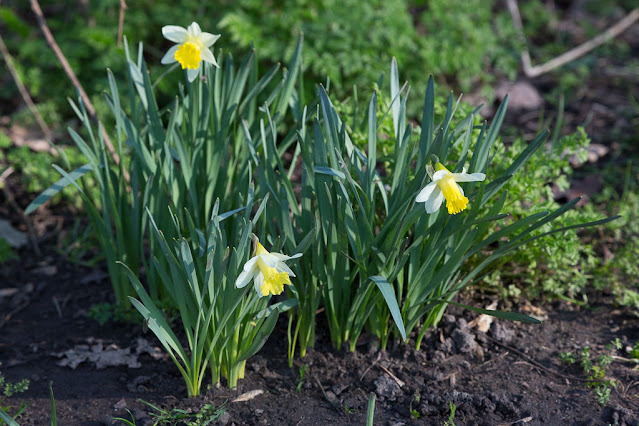 I tried to shorten the walk, but every time we came to a turn we usually take, Olga insisted we take it. She does not like to change the routine. We wound up walking our full loop.

The daffodils were blooming on Hampstead Heath Extension, where I had a bit of drama of my own. As I listened to the Moody Blues on iTunes, Olga splashed around in a muddy creek, and abandoned her tennis ball in the muck. (In addition to moving more slowly, she's much less diligent these days about hanging on to her tennis balls.) I bent over to pick it up, and my iPhone fell out of my jacket straight into the creek. Ugh!

I fished it out within just a few seconds, and after drying it off on my jeans I was relieved to find that it still worked. I took it out of its case to let it breathe, and because it seemed OK, I continued listening to my music as if nothing happened. Which was fine for about half an hour, and then suddenly the music stopped playing. So maybe some water got into it after all.

Now the phone is turned off and sitting in a tub of dry rice, where I'm supposed to leave it for 48 hours. In theory the rice leaches any dampness out of the phone. The other apps and data seemed to be working fine, but we'll see in the long run, I suppose!

Fortunately I'm not addicted to my phone. It can sit in that rice for days and that's fine with me. 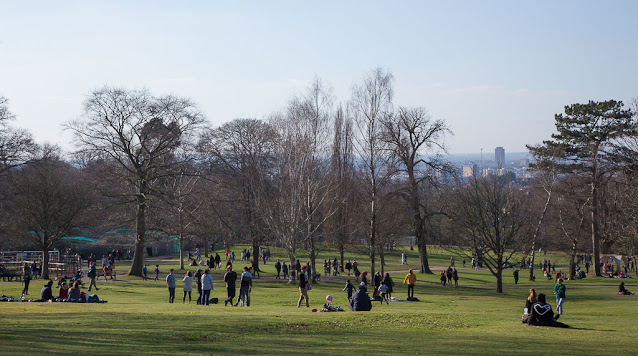 There were lots of people out in Golders Hill Park, as you can see. Pandemic? What pandemic? 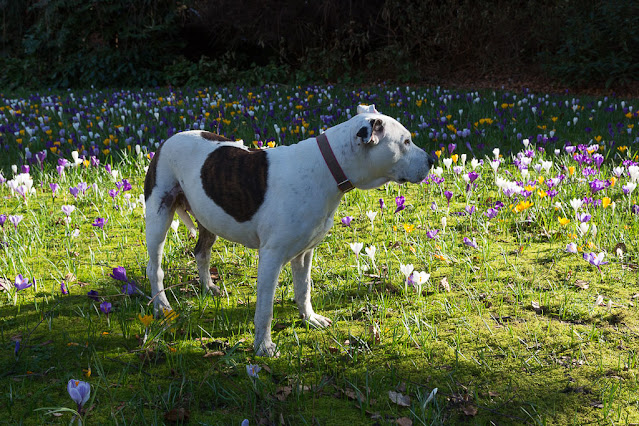 No crocuses were harmed in the making of this picture. Well, OK, maybe one or two.

In the evening, as Olga snored on the couch, Dave and I watched a long documentary on the BBC from a couple of years ago called "HyperNormalisation." It contends that politicians, banks and others in power have in recent decades built an artificial reality that they've sold to the population at large -- blaming various international players for things they didn't do to justify diplomatic or military actions, for example. We have traded truth for stability, even amidst falsehood.

It's an interesting film, but it sprawls and knits together events and occurrences that, to me, seem only barely connected, if at all. Some of its information isn't new -- in the run-up to George W. Bush's war in Iraq, for example, we all knew Bush's justifications were baloney. We were simply unable to do anything about it. We couldn't stop the conflict.

Anyway, the filmmakers contend this climate of falsehood since the Reagan years has helped lead to catastrophes like Trump and Brexit -- desperate actions by increasingly alienated voters who know they're being duped. I forget how I even came across this movie. I think it was mentioned in something I read. Again, not bad, but long and sprawling.
Posted by Steve Reed at 7:19 AM