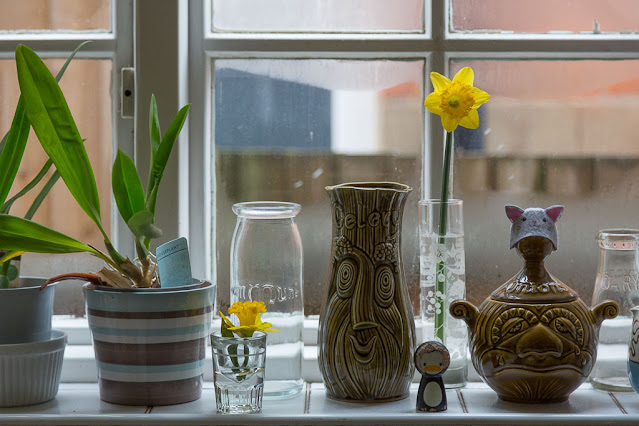 Every year, Olga -- or any of the other four-legged denizens of our garden -- knocks flowers off our daffodils. So we always wind up with a windowsill like this, with broken-off flower stalks in the bud vase and decapitated buds in the shot glass. Daffodils, fortunately, are very hardy, and they always bloom even in this condition.

We have a regular winter wonderland out there this morning, after getting light snow throughout the day yesterday and overnight. It's not as nice as our snowfall a couple of weeks ago. This is a harder, crustier, less picturesque coating that's supposed to make travel even more of a challenge. I plan to walk to work this morning as usual. I'll be careful, I promise.

We stayed in most of the day yesterday, although Olga did demand a walk in the afternoon. I bundled up and took her around the neighborhood, even though it was 34º F and sleeting. Fortunately she was content with a walk up the high street and through the nearby housing estate and didn't insist on going all the way to the cemetery or, God forbid, the Heath.

I mentioned our old and new floor lamps in my post yesterday. Just so you can see what I'm talking about, here's the... 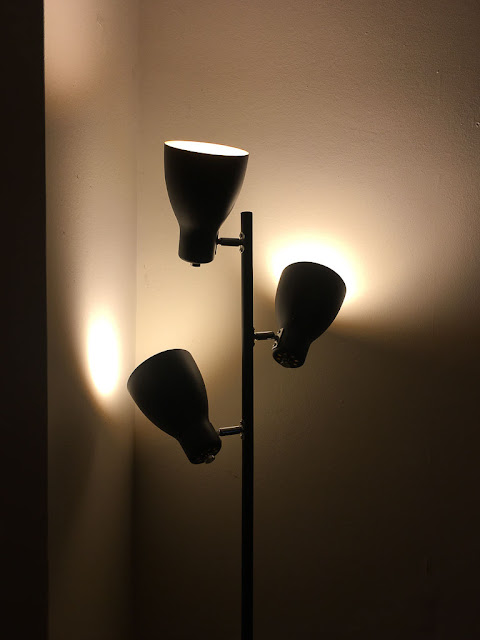 ...is the more basic but much more functional new lamp. I did move the old lamp into the foyer, and when I turned it on to take its picture, I realized it actually creates pretty nice light in there. So maybe we'll just keep it. Now it's in a place where occasional flickering isn't so annoying. 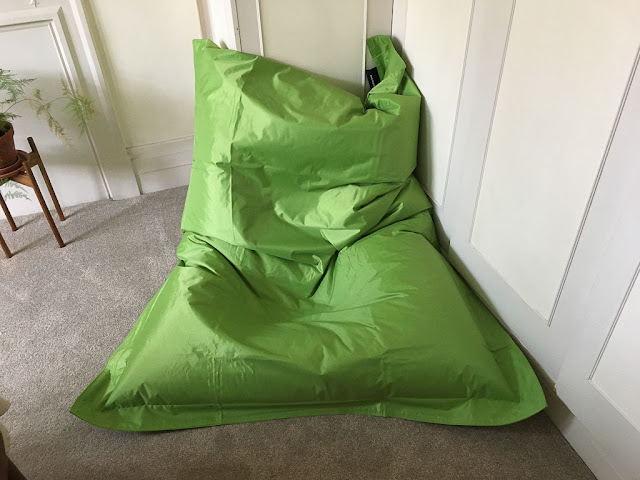 What the heck is that, you say? Well, it's a beanbag chair -- a really huge beanbag chair. Bigger than I expected when I ordered it, frankly. But that's fine. Olga and I can use it together!

Dave and I have been figuring out how best to use our space during this lockdown time. Normally we both sit in the living room, but now that he's conducting Zoom classes in his recliner, I'd rather not be there. I can't read or focus on other things when he's trying to corral chattering kids on his computer. So this beanbag enables me to go sit in the dining room and read. It's called a Bazaar Bag or something like that, and it's easy to move around so I can take it wherever I want to go -- even out into the garden.

We bought Olga a new dog bed, too, but somehow I think she'll be in the bean bag. When I was a kid, my brother and I had bean bag chairs in our living room. Our dogs, Herman and Hoover, normally lived outdoors, but when Mom wasn't home we'd occasionally bring them inside for a bath, and then we'd let them lounge in the bean bags. From then on, they made it a mission to shoot into the house the minute we opened the door so that they could claim their bean bag space. I still remember the way Herman would hurtle into the chair. I wish I had a video of that, because it was really funny -- she thought that bean bag was the best thing ever. (Yes, Herman was a girl. So was Hoover. We didn't choose the names, but somehow, they fit!)