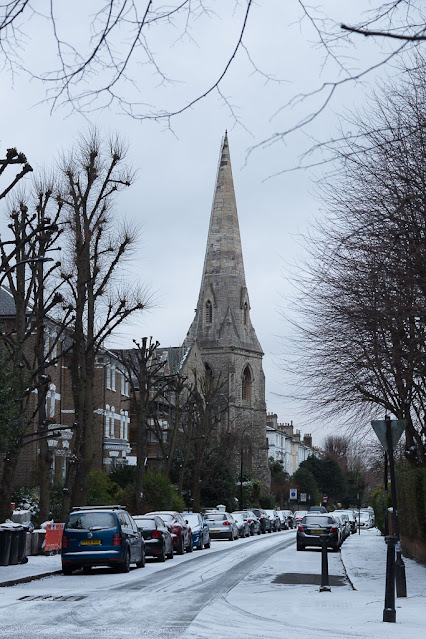 We are in the deep freeze here, with temperatures in the high 20's F and ice and snow on the ground. My walk to work yesterday morning was so slippery that I almost turned around -- I slipped and slid three times on our street alone. But practice makes perfect, and once I figured out how to navigate the icy patches I was fine. I never fell, thank goodness.

The view above is from my walk -- that's the imposing stone steeple of St. Mary's church on the corner of Priory and Abbey roads.

I had a pretty busy morning in the library arranging for book pickups. There are still hardy souls ready to come out, even in this weather, to collect new reading material! In fact I'm going in again today -- now that we're offering checkouts, working from home a few days a week may no longer be possible. Depends on the demand, I guess.

Not until last night did I think to check who won the Super Bowl, and as most of you probably already know, it was my own hometown team, the Bucs! My dad would have been thrilled. But he would not have been among the insane crowds tearing apart Tampa's streets afterwards -- in the middle of a pandemic, no less. What is wrong with people?!

Meanwhile, a contentious local government Zoom meeting in England has gone viral, resulting in hero-worship status for government clerk Jackie Weaver -- who apparently DID "have the authority." (Click the link to see what that means.) One of my co-workers alluded to it in an e-mail yesterday, and I hadn't seen it, so I watched it last night (that's the 18-minute version, but there's also a 30-second condensed version and the full 1 hour and 20 minute version). I found it both funny and annoying. It's a good example of bullying and mansplaining, not to mention Zoom dysfunction, but to be honest, I'm not sure it's worse than a lot of local government meetings I sat through back when I was a reporter. Give some people a little power and they go crazy. 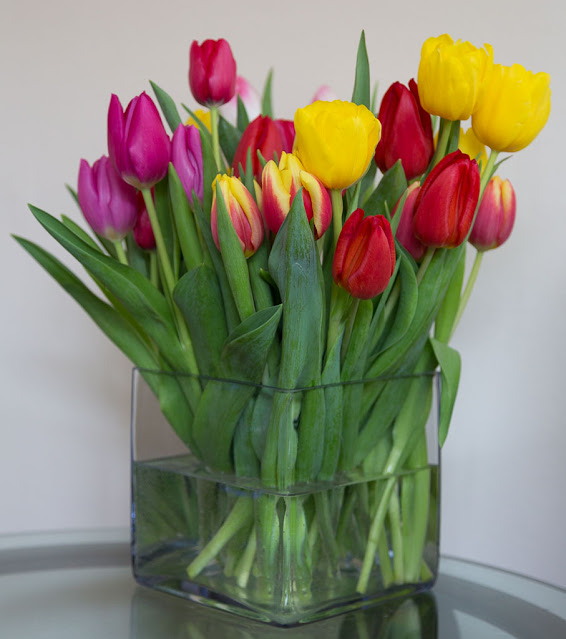 To counteract the wintry gloom, here's a picture of the tulips I bought at Tesco on Saturday. That vase was another street find several months ago. I bought two bunches because it's such a wide vase, but I expected the flowers to flop more -- maybe one bunch would have been enough!