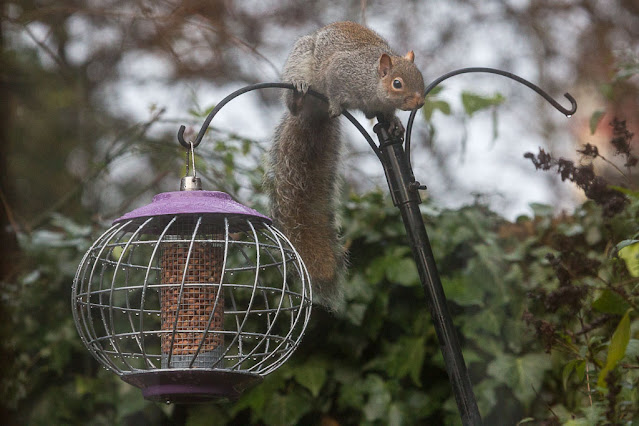 Dave and I ordered a new peanut bird-feeder for the garden. The handle on our old one was broken off, so I had to suspend it with garden wire, and the lid was fastened down with duct tape so the squirrels couldn't remove it -- but I also couldn't easily fill it. It was no longer attractive, to say the least.

The new one, fashionably purple, arrived a few days ago and I suspended it from the now crazily tilted pole by the patio. It's supposed to be squirrel-proof, and as you can see, it got tested yesterday morning. 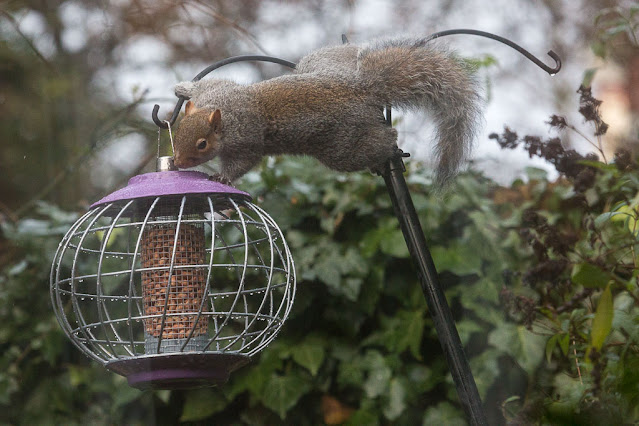 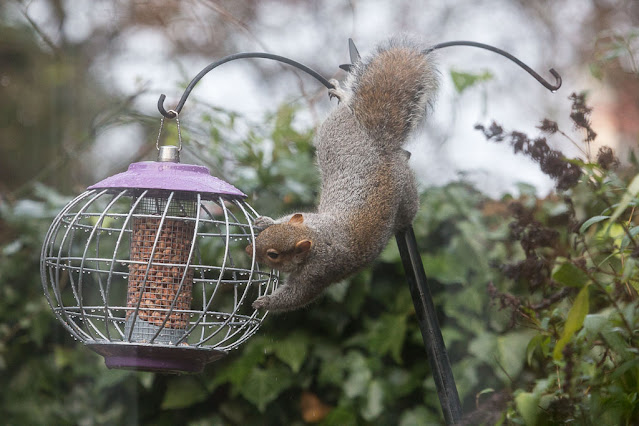 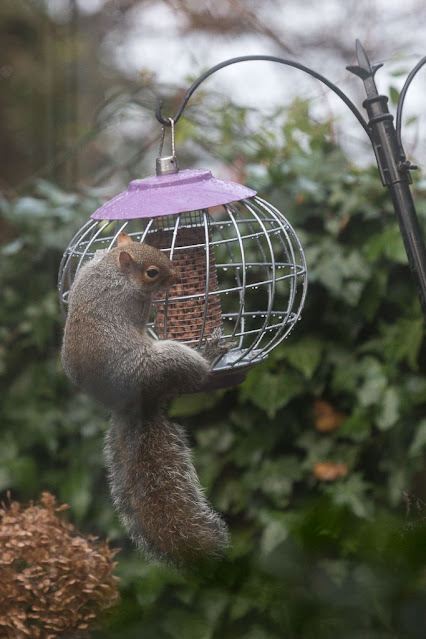 Squirrels are persistent, but this one never got into the feeder and gave up after a while. (We used to have a squirrel feeder mounted on our fence, so they could get their own peanuts, but we had to take it down after rats showed up.)

Speaking of small furry animals, Punxsutawney Phil yesterday predicted six more weeks of winter. Has there ever been a less scientific, more ridiculous event than Groundhog Day? I guess we all need a bit of fun in the winter. Especially this winter.

It's not particularly wintry around here at the moment. It was 54º F yesterday, which is practically balmy, and the days are getting visibly brighter, which is a nice change. I think we're supposed to have rain the rest of this week and more freezing temperatures this weekend, though.

I worked from home, and speaking of which, I've discovered a handy little gadget on my computer that tells me how much time I use it each day. It's horrifying. Yesterday, for example, it says my screen time was 12 hours, 34 minutes! Now, granted, that included my work time, and it's also our TV time because we watch Netflix and Amazon Prime through my computer. I read at least two newspapers every day, all online. And I don't use my phone or any other device much, so that's all my screen time. But STILL!

I need to turn off my computer more.

I did get some book reading done, as well as some basic housekeeping. I cleaned out the refrigerator and found some Greek yogurt that expired Nov. 12. It looked fine, but that's just too old to consider eating -- even for yogurt, which by definition is a bacteria culture.

In the afternoon I heard weird, clattery sounds coming from the street and looked out the window to see three neighbor kids jumping skateboards off a ramp in front of our house. They were doing lots of dramatic shoulder-rolls into the gutter. They had helmets on, thankfully. I'm amazed Mrs. Kravitz tolerates them.

Dave and I have started watching "The Walking Dead," which I know will make John happy. Somehow we never climbed onto the zombie bandwagon before now. We're also still watching "Halt and Catch Fire," which gets better as it goes. We're just about to start season four.
Posted by Steve Reed at 6:58 AM