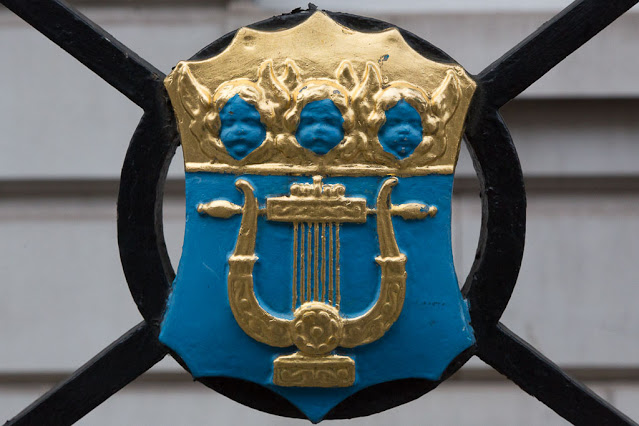 Yesterday was the most beautiful, balmy spring day -- blue skies, sunshine and a high temperature of 58º F (14º C). When I came home from work around lunchtime, I put on shorts and went out to sit on our garden bench. First time I've done that in a while.

The garden was alive with birds. Along with all the usual culprits -- blackbirds, pigeons, tits and dunnocks -- I saw a couple of goldfinches. It was such a pleasure to sit and watch them.

Thanks for all your concern yesterday about my "pink belt"! Some of you shared my initial worry that it's shingles, but I am now certain it's not. There's no pain, there are no blisters, and it appears on both sides of my body. (Shingles usually appears only on one side of the midline, or the spine.) It's just a red band, mildly itchy and slightly puffy.

I think it's something called polymorphic light eruption, which can happen to pale people like me. Basically, our bodies have an immune response to the UV radiation in sunlight. Apparently this occurs in northern climates where people go without sun exposure for months during winter, and then bare their formerly protected skin to sun in the spring -- which is exactly what I did. It doesn't take much exposure to create a rash.

Anyway, enough about my temperamental skin. 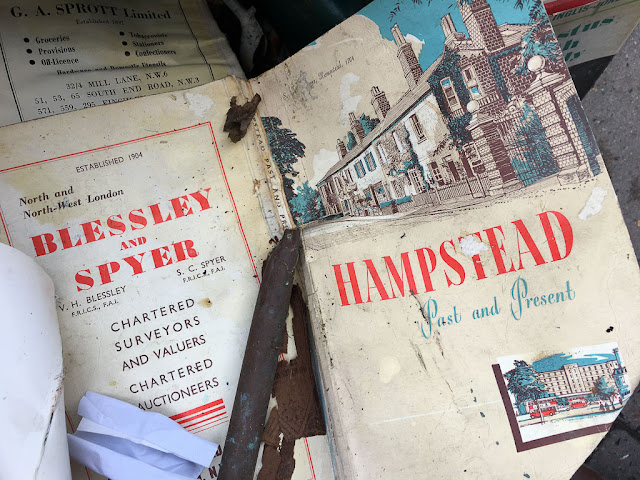 Yesterday, walking to work, I came upon a pile of sodden trash bags and other debris sitting on the sidewalk (in the same place where I found the bottles last May). As I've said, it wasn't a rainy day, so I think this stuff got wet some time ago. Someone must be cleaning out a leaky storage shed. Included were several books, some of which were beyond repair, like this one about Hampstead's history. 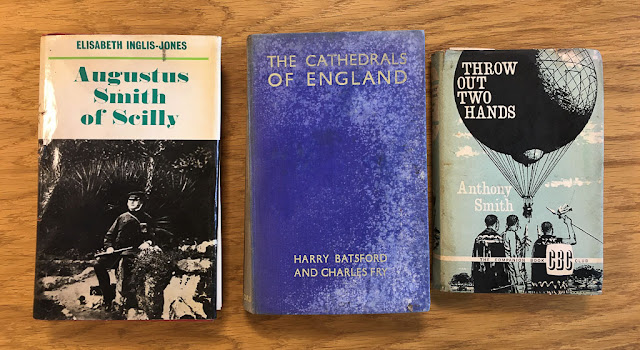 But these three, although damp, didn't look too bad -- so I picked them up and took them to work. I cleaned them up and I'm drying them out. 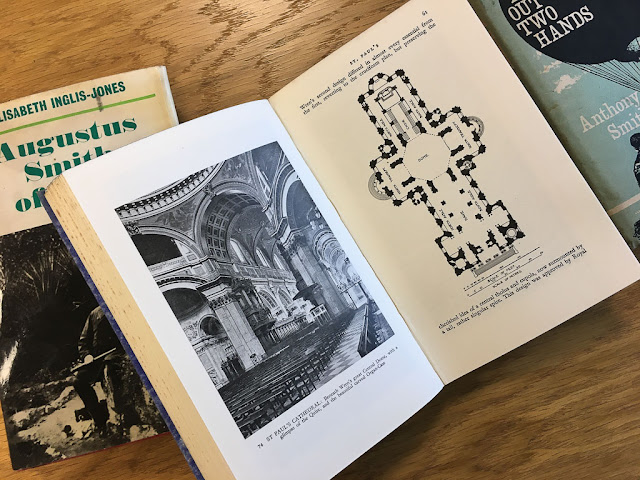 The cover of the book on cathedrals doesn't look great, but the inside is fine.

I hate to discard old books. I always think, "What if this is the last one?" (Not the case with these three, which are all readily available online for about £3 each.)

I have no idea what I'll do with them, assuming they don't go straight into the trash can (which they will if they're too warped or damaged after they dry). I don't particularly want to read about cathedrals and I don't care about the life of Augustus Smith, who was governor of the Isles of Scilly back in the Victorian era. But "Throw Out Two Hands" looks interesting -- a book about some guys who took a hot-air balloon across Central Africa in 1960. It has good reviews and includes pictures. I might actually read that one.

(Top photo: Detail of a fence in Marylebone, last Friday.)
Posted by Steve Reed at 6:40 AM

You might be pleased to know that every time I pass discarded things during my walks, I wonder, "What would Steve do?"

I had beautifully smooth skin when I was young and the price of being older is that is not. I have all sorts of skin issues, although nothing too serious. We really have to stay out of the sun.

Aside from the ballooning book, the other two sound like flick through books. I have a project underway of flicking through all coffee table books.

Can you recycle the unwanted books somehow?

You "hate to discard books". So do I. I wonder where that reverence stems from when, with few qualms, we get rid of so much else. Some of my fellow human beings even get rid of people they once had an affinity to.

Till some years ago public libraries would accept books (hard backs). No more. Such a pity as I felt that that which I didn't need any more, those books that had outlived my interest, could serve a much greater readership - therefore be put to continued good use.

Didn't get round to commenting on your daffodil window sill yesterday. It's joyful. I like how you make use of the odd glass bottle/jar. Like all cliches it sounds trite, yet doesn't make it less true: There is beauty in the most unassuming. If only one can see it.

Let's hope that you do not get polymorphic light eruption on your bare legs! Not a good look.

I'm with you - my eyes immediately went to the ballooning book. Someone knew how to construct an effective title, since I've never been particularly interested in reading about ballooning.
And it sounds like you got out of Florida and off to the cloudy UK not a moment too soon.

I don't think i have ever, nor could I ever, throw a book away. There's always places to donate or friends who may want them.

Glad your 'patch' isn't shingles; I've had shingles; not fun.

You are obviously living where you should be. Geographically, at least.
As much as I love books, and as much as I hoard them, I do think that there are times when we need to let one go. Perhaps books are a little like bodies- when the soul is gone from them, it is the most graceful thing to let them rest in peace and eventually, return to the earth.

The temps there are the same as what we're getting here when the sun is shining. It is quite a wonderful thing after so much cold and rain.
I'm glad you diagnosed your pink belt and that all will be well.
It will be interesting to see how those books dry out. Nice rescue.

Sitting in the garden and listening to the birds sounds like a perfect way to spend the afternoon. That book also sounds interesting. It reminds me of movie I found recently. I haven't watched it yet but I put it on my list. It's about a woman who walks across Australia on her own with several camels in tow. Sounds like quite an adventure. It's called "Tracks".

I must remind you that you have a pile of Newbery books to finish reading so don't get carried away on a hot air balloon over Africa! :)

our usual weather for this time of year sprang back immediately as soon as the freeze was over. back door open listening to the birds. starting to clean up some of the dead foliage.

Many health issues are not serious but very much a concern.

No one should put a book out in the moisture. It just ain't right!

Oof - I'd have to stay away from those books until they were GOOD & DRY. I'm allergic to book mold. I remember one time Mike got a used book he thought I might like & I did until I started dripping from my nose & eyes. Ha!

One Option, Cut Out The Middle Of The Middle Pages, Nice Stash Spot - That Would Make For A Nice Gift

I'd suggest having your pink belt checked by a medical person. Some rashes are very contagious. I'm envious that you can sit out in your yard in shorts and enjoy the birds. It's still much too cold here. Thank you for checking that article about the dish soap. Have a fun day, hugs, Edna B.

Ha! I love that my name has become synonymous with trash-picking. LOL

Yeah, our skin endures a lot of abuse during our lifetimes! I fortunately have avoided serious problems so far but I am due for a dermatology checkup.

Sadly no. Apparently they can't be recycled because of the glue in the binding.

I was always taught to respect books, and I've never shaken that impulse. Combine that with my penchant for wanting to rescue things, and you wind up with someone who can't toss a book!

For some reason, my legs, arms and face aren't bothered by sun. (I guess because they're exposed more frequently than the rest of me!)

I do feel like the climate in the UK is better suited to my skin tone!

Yeah, Dave's had shingles too and he was certain this wasn't it.

Yeah, they are beyond saving sometimes. I just ask myself, "Would I want to read this, in this condition?" If the answer is no -- trash.

They're in pretty rough shape. When books get wet they're almost never worth saving, unless they're rare or archival manuscripts.

Wow! I can't imagine walking across Australia. Sounds like a good way to die!

You are ABSOLUTELY RIGHT -- not to mention all the adult books I also have waiting for me. I have plenty to read already. But I can't help adding this one to the stack.

Glad your weather is back to something closer to normal!

Yeah, it looked very strange, but in the end no big deal.

I agree! Sometimes one of the kids at school will leave a library book out in the rain, and I think, "HOW could you do such a thing?!?!"

Oh, yeah, these would not be the books for you. Even after drying I suspect a certain mustiness is inevitable. LOL