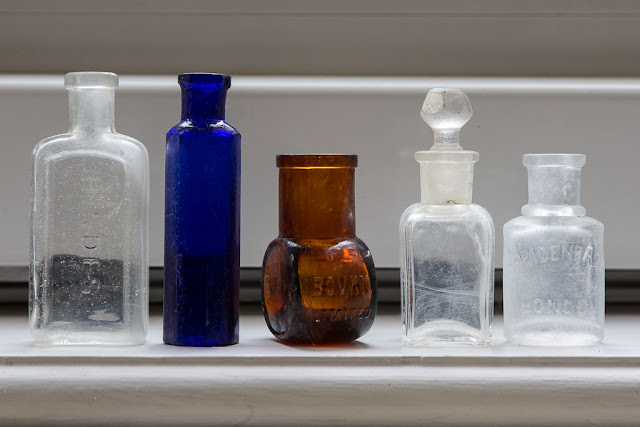 Yesterday on my way to work I passed a pile of rubbish in the street with some clay flowerpots sitting on top. I thought, "I could use those!" So I grabbed them, and when I did I noticed a nearby container, also in the rubbish pile. It was in a box along with some cans of old paint, and covered with grime and leaves as if it had spent years in someone's garage or shed. On the top were several odd-looking brown bottles.

I realized they were old Bovril bottles. Bovril is a beef extract that can be either made into a hot drink or eaten as a spread, sort of like Marmite. (I've never had it but apparently it's still being made.) And beneath the Bovril bottles were other parcels wrapped in old tissue paper, containing what felt like glass objects. I picked up the whole container and took it to work with me.

It wasn't until I got home in the evening that I had a chance to unwrap everything and take a closer look. 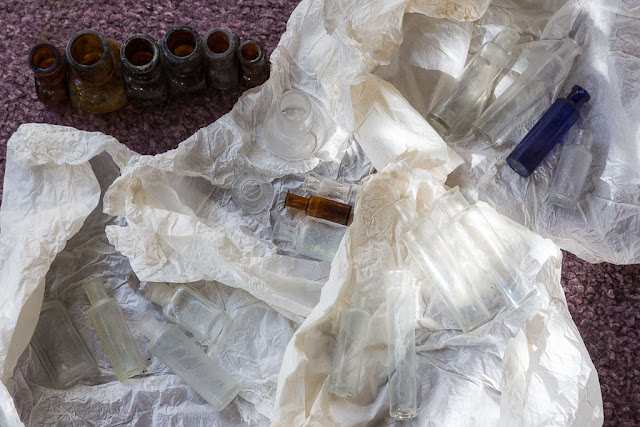 There were about 30 little antique bottles, clearly someone's erstwhile collection. They looked like pharmaceutical bottles, maybe -- long and thin. Only a few (aside from the Bovril bottles, which are all marked) had embossed words on them. One said "Breidenbach London" and one said "Hindes." Breidenbach was apparently a Victorian perfume maker.

Here are the Bovril bottles, once they'd been cleaned up a bit. There are four sizes. I read on this fascinating blog (and how did I not know about a blog specializing in Victorian trash?) that they're probably from between 1918 and 1930. From what I can tell they have machine-made lips, as opposed to hand-tooled lips, and were originally sealed with corks.

What a fascinating haul! And I'm so glad I got to it before the rubbish men. I can't imagine why someone tossed out such old and interesting objects. It would have been a shame to have them ground up into recycling. Those are my favorites in the top photo, sitting on our windowsill. It makes me wonder what else is in that pile. If it's still there this morning I may take a closer look! (Dave will love that.)

And oh yeah, being back at work? Well, it felt great. I had a lot to do and it kept me busy all day -- and yet I only interacted with five or six people because the school is mostly locked up and dark. It's an ideal working situation if you're trying to avoid contagion! I began our book inventory, processed all the magazines that had arrived in the last couple of months, and neatened things up overall. There's plenty more to do so I'll be busy for the rest of this week at least.

The main downside, as I see it, is that there's no lunch available in the building because the cafeteria is closed -- I had to run out to a nearby Pret (amazingly still open) for a takeaway lunch that cost me almost £10. I'll probably pack a lunch today. Also, because the coffee machines in the staff lounge are turned off, the only available coffee is instant. I suppose I can cope with Nescafe. It reminds me of Africa -- when I traveled through West Africa in the early '90s Nescafe was often the only available coffee!

Those are minor complaints, I know, compared to all the problems afflicting the world.
Posted by Steve Reed at 6:27 AM