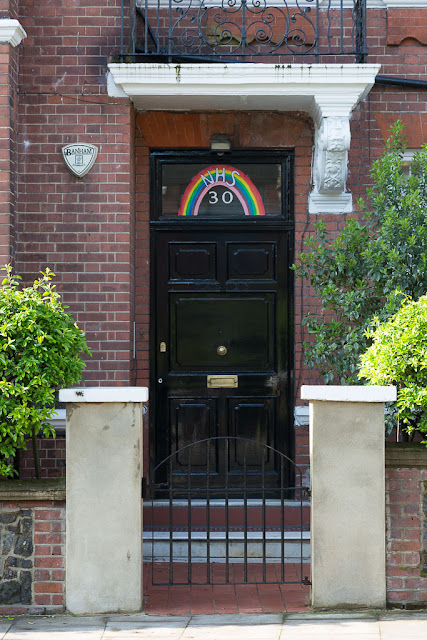 A few weeks ago I posted some of the rainbow tributes to the NHS that I'd seen around the neighborhood. Here's another -- artfully subtle!

We all applauded again last night, standing out in front of our houses. I do it, and it's a nice show of national unity, but I must admit it feels a little strange. We all stand there clapping and looking around and smiling at our neighbors, but I think we're supposed to clap for five minutes -- which is an eternity if you're applauding in the street. Most of us stop well shy of that amount of time. I can't help thinking what the NHS really needs, instead of (or in addition to) applause, is money. 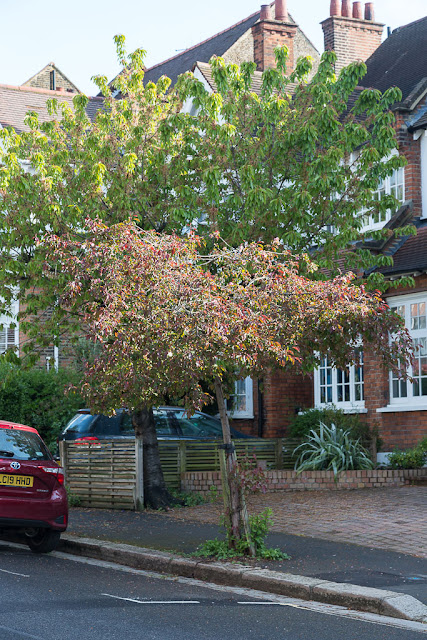 Can you stand another picture of the viney tree? Now that it has shed its blossoms, we can see what it really looks like. I love the reddish hue of the leaves -- this tree has a lot of pigmentation. It's somewhat hunched from bearing the weight of that massive vine, but I wonder if it will eventually stand more upright? Every few days, as I walk by with Olga, I pull little vine sprouts from around the base. 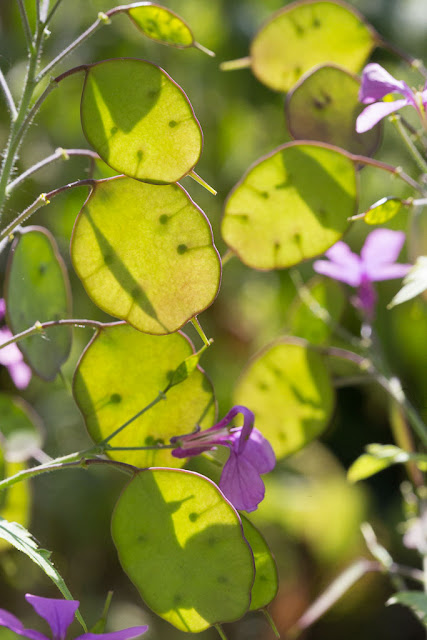 The flat seed pods of the honesty in the garden are developing nicely. I love the way these plants turned out. This was a good experiment in wild seed-growing. 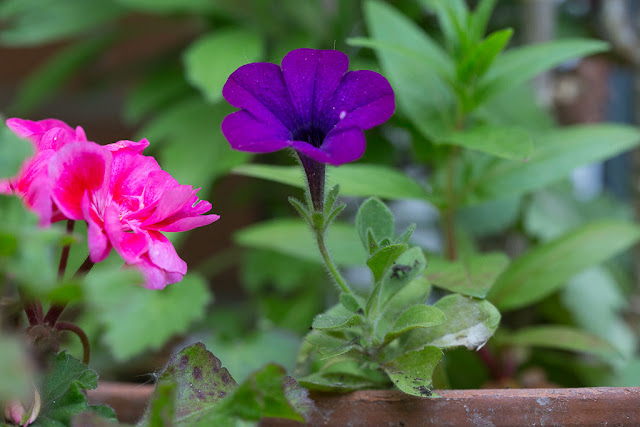 And check this out -- yesterday morning I discovered a petunia growing in one of our geranium pots! This is why I don't pull weeds too assiduously. Every once in a while, something that looks like a weed proves itself to be something else! I guess one of our petunias set seed in this pot at some point.

Despite my relative tolerance for weeds, yesterday I spent a lot of time weeding the patio. It was beginning to look way too messy out there, with vegetation growing between all the patio stones. I left some growth to keep things interesting -- forget-me-nots, yellow corydalis, dog violets and some lady's mantle that seeded from our garden plants. I don't want the patio to look too clean. I'll share a photo once we dispose of the old patio table (on Monday!) and get the new one set up.

I took Olga to the cemetery, and on the way she embarrassed me by outright attacking a much smaller little mop of a white dog. Of course she wasn't on her lead, and the white dog was, which made me look even more like an irresponsible dog owner. I don't know what prompted her. We were on a narrow fenced path, and I suspect the little one growled as they passed each other, as little dogs often do -- but still, Olga usually just ignores them and goes on her way. After we pulled them apart the other dog owner said, "That dog should be on a lead!" All I could do is lamely explain that this is very unusual for her. Who knows what goes on inside a dog's brain?

As Dave said, when I related the story, Olga is becoming a cranky old lady. I may in fact need to keep her on a lead more often.

If you want some interesting reading, here are a few recommendations:

-- I don't care much about Val Kilmer, but the New York Times had an excellent article about him and his career by Taffy Brodesser-Akner. I've read other pieces by her and I love her writing.

-- The Times also had an interesting article about the ghost dogs of the Amazon, a secretive species of canine living in the South American jungles. Apparently they're almost never spotted in the wild. They've only been captured on remote cameras by researchers.

-- And finally, after a caller reported an escaped lion in the farmlands of Kent, the police called out officers and a helicopter only to learn their quarry was a sculpture.
Posted by Steve Reed at 7:35 AM