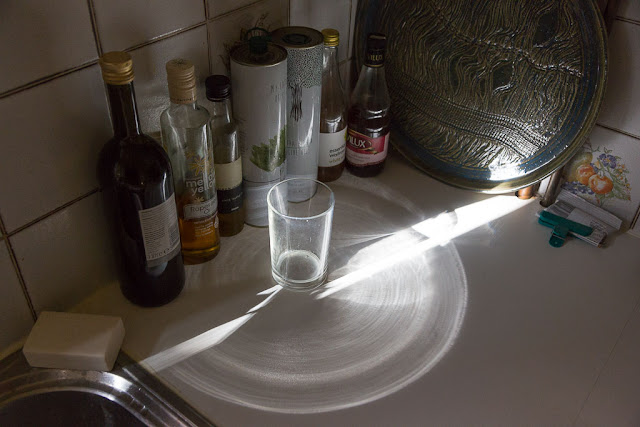 Thursday morning I was doing dishes when I noticed the sun hitting this glass in just the right way, creating a halo on the counter. Kind of cool!

All this hanging around the house is starting to get to me. Yesterday felt very frustrating. I walked the dog; I went to the grocery store. I'm usually the kind of person who finds enjoyment even in small, routine tasks, and I'm not easily bored. But the sameness of my days feels numbing.

Sure, I still have things to do. I read (still not caught up on my New Yorkers!), I shuffle around in the garden. I think I need to take myself on another long dog-free walk -- I need to stretch my legs, and Olga, who is usually such a reliable walker, has become much more finicky about when and where she wants to go. She used to refuse to walk in the rain; sometimes now she refuses on sunny days, for no apparent reason at all. She's just not in the mood, I guess. But then I wind up not walking, and that's not good.

Anyway, I know this is nothing different from what many of us are experiencing. We've all mentioned the "Groundhog Day" phenomenon.

While at the grocery store, I picked up a couple of bedraggled foxgloves that appeared to need a home. I always go for the saddest ones on the plant shelf -- these two were droopy and broken and in desperate need of water. We've already got a million foxgloves but we can always use a few more; the bees love them.

Speaking of rehabilitating plants, here's an update on our plant hospital: 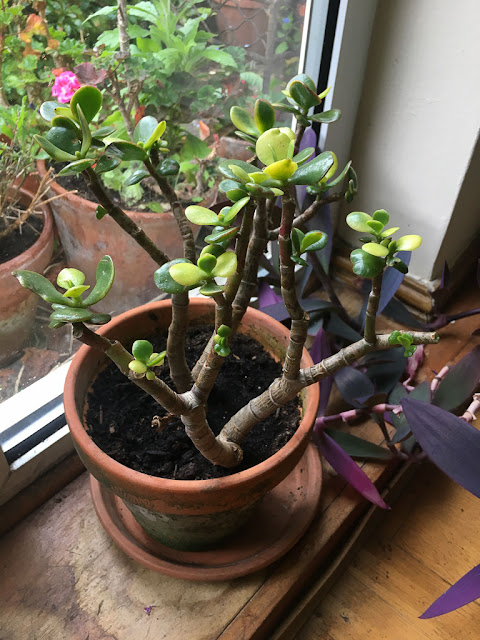 I rescued this jade plant from Mrs. Kravitz's garden waste bag. It sat untended at the side of her house for weeks and many of the leaves had turned yellow; she pulled it up and threw it away. But it still had plenty of roots attached, so I thought I'd try to rehabilitate it. As you can see, it's doing quite well -- the yellow leaves are turning green again, which I didn't even know was possible. 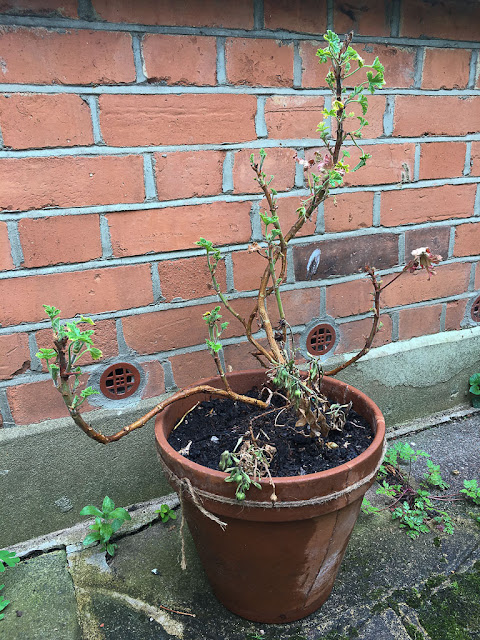 I found this sad-looking pelargonium about a week ago in the cemetery. Someone had dumped it out of its pot near the back wall. I brought the entire root ball home (it was very dry) and put it in a pot. It has perked up since then, but it's probably not going to look like much this season. We'll see! 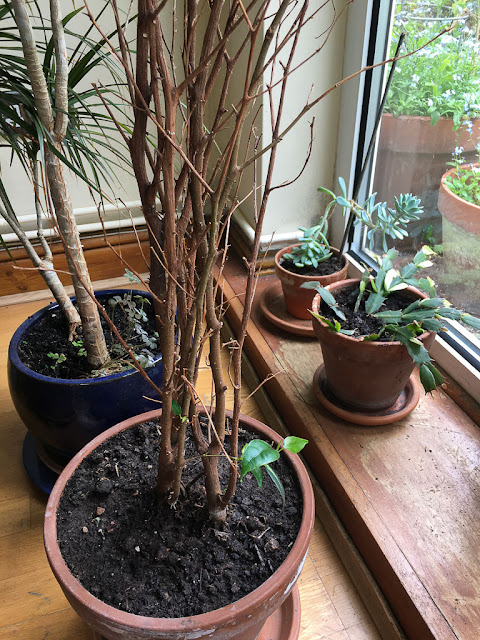 Remember the discarded ficus tree I rescued back in February? Well, this is what it looks like now. The top is still just dry sticks, and is probably mostly dead. But we have new little leaves sprouting from the bottom. I'm going to wait a bit longer, until it leafs out more, and then I'll prune the dead stuff away. This is apparently going to be a slow recovery.

To the right you can see a Christmas cactus I grew from some pieces that broke off our library cactus last September. The bigger pieces didn't survive -- they were on woody stalks that apparently were unable to grow roots -- but the smaller ones are growing like crazy.

That dracaena in the background, immediately behind the ficus, is a rescue too. When I found it, it had no pot and barely any leaves (fourth photo down in this post) but now it's looking happy.
Posted by Steve Reed at 7:10 AM

I have the same feelings towards plants.....I want to save them! I have 5 quite large Jade plants. The oldest of them has recently flowered! I didn't know they could. One of mine is going a bit yellow.......how did you turn yours green again? I guess feeding it might help, but I am notoriously bad at remembering to do that. I also see that you have a " purple people eater" behind your jade plant. I had one years ago in my flat and friends called it that! Great coloured leaves.

Frances: Honestly, we just potted our jade plant and put it in a sunny window, and gave it water, and it turned green again. I'm not sure what to do with one that's been going yellow despite good care. Food certainly wouldn't hurt! Maybe make sure it's not getting too much water and it's got good drainage. The purple plant we call a purple heart -- it's an outdoor plant in Florida, where I'm from. I don't see it much here in the UK! But yes, it's beautiful in the summer, when it gets lots of sun and goes dark purple.

I would have a plant hospital if it didn't make SG crazy. He's fairly heartless (when it comes to plants).Got back an hour ago from a 1-1/2-hour walk. What joy! Looking forward to doing take-away from our favorite restaurants... when that day comes!

You are a botanical Doctor Dolittle! And yes, I think you should treat yourself to a long, solitary Olga-free walk. How about walking down to The Thames via Hyde Park and then back home via Regents Park? I reckon that would be around seven or eight miles. Or maybe over to Harrow-on-the-Hill and back. Alexandra Palace?

You have done a great job resuscitating all those plants. I have never heard of a Jade tree-I will look it up. We have a 25 year old Ficus that was left as a twig on the windowsill in the flat two flats ago. Andy decided to water it, even though it looked completely dead, and after a while a single leaf popped out of the top. It is now about four feet tall and in a massive pot which I will struggle to re-pot and also to find somewhere for it to go. It lives by the back door as it seems to love the sun, and I replace the top of the compost every so often.

There is nothing like restoring poorly plants. When we had our allotment we used to buy up really cheap plants from Sainsbury costing a fraction of the original price and bring them back to life.
I think we are all going stir crazy although we have still been going down too the seafront for a walk. As long as you keep moving the police do not bother you but if you stop to sit for a moment they are on you like a ton of bricks, lol
Briony
x

YP had the same thought as me. You are the plant version of Dr. Doolittle.
Dr. Green Jeans? Better looking than Mr. Green Jeans. :)

I love that circle of light you captured with the sun and the glass. You have rescued an amazing amount of plants. It's very impressive.

Dr. Plant. That's you.
I love that you rescue these poor bedraggled babies and bring them back to health.
Yes. I believe a long dog-free walk is just what you need.

What a wonderful rehabilitative plant hospital you have there, Dr. GreenThumb! I have been wondering what to do with a very large aloe vera plant we have. I may have to contact you soon for a consult.
That circle of light is so beautiful. A lovely moment in this rather boring world we have now.

It's shameful the way people waste and throw things away. I had a classroom full of plants. People sent me their rejects.

I get such a kick out of your plant rescues. good for you.

I am in awe of your botanical skills, Steve. Keep on keepin' on.

I love this post - and the title is perfect. I wish I had a green thumb. It's so nice to see little green shoots and buds, especially after a drab winter.

You really have magic hands Steve and I am so amazed on how you rescue those beautiful plants! We also have an old Jade Plant at home and I must say it is one of the strongest and most resilient of the plants that we have here. I have just discover the wonders of gardening a few weeks ago and how it calmed me in times of my anxiety. Now I have a precious space that I hope to further grow :) Happy Weekend!

Jade plants grow outside like weeks in California. I've never been able to grow one indoors. They get leggy, the arms fall off. I think I have become death for plants. At present I'm in the process of killing a geranium. A geranium!!! How does this happen? My bougainvillea is happy, so there's that.

Well done, you! Those are looking good...

You are a plant whisperer. I'm in awe.

Great job on the plants! And yes, take a nice long walk - it feels like it’s been forever (no doubt due to the problem of public transportation).

I believe in that ficus!

Those brief moments where sunlight and glass throw intriguing reflections are a wonder to behold.
And the frustration of hanging around the house. I heard a young fellow talking about six months isolation in a hospital room and one of the things he learned was to manage his expectations.
And just go on a long walk, I don't know what the London rules are but by walking to the end of your limit, you can still walk a long way.
Things are looking good in the Reed Plant Refuge!
Alphie

Thanks for the comments, everybody! I'll keep you all updated on how our patients progress. :)

YP, I've been considering a longer walk down toward the Thames. You'll be the first to know (well, among the first) if I do it.

Robin, I'm happy to give advice on the aloe, but honestly, all we do to ours is water it! They need good drainage and good sunlight, but super hot, glaring sun will sometimes darken the leaves.

Stevenson: Thanks for visiting! Our garden is CRUCIAL to my sanity!

Allison: Geraniums like a lot of sun and good drainage. They don't like being overwatered. Maybe that's the problem?

I love how all your plant patients are doing so well. They are really thriving. And I agree that a garden can always use another plant. Enjoy your day, hugs, Edna B.