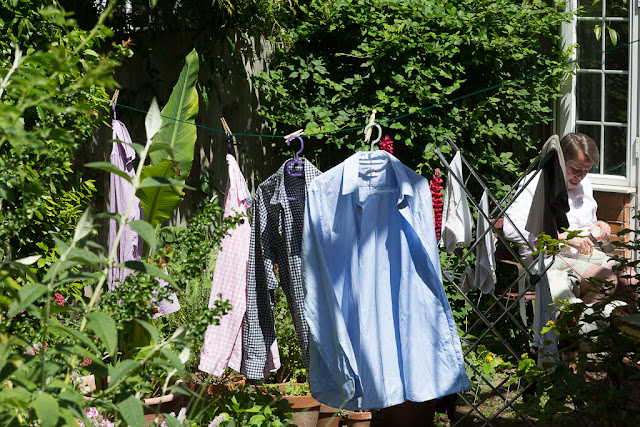 I was going to take a photo walk yesterday, but I just could not get myself motivated. I wound up hanging around the house all day, reading more New Yorkers. I finally caught up on all of them and enjoyed some fascinating articles, like one about the mysterious life cycle of eels -- I kid you not. Did you know that no one has ever seen adult eels reproducing? And that they don't even have gonads for most of their lives? Apparently Sigmund Freud dissected thousands of eels in an attempt to find their sex organs -- which seems a very Freudian thing to do, somehow -- and he never did because they weren't there.

There was also an article about Shecky Greene, the comedian. Remember how I had a dream about him not too long ago? I thought that was pretty coincidental.

Anyway, in the middle of my reading, as I was sitting quietly out on the back garden bench, a blood-curdling scream suddenly issued from Mrs. Kravitz's house. It scared me to death. The Russians upstairs ran out onto their balcony, and then Mrs. K came out onto hers and screamed again. Like, literally, at the top of her lungs. Her daughter ushered her inside and closed the door, where we heard more screaming. I have no idea what that was all about, but I think maybe she was having a conflict with her maid (who is actually named Martha, believe it or not).

My heart was left pounding by the whole episode, but I saw Mrs. K later in the day and she seemed fine. So whatever happened must have been a transient thing. Talk about drama! If I hadn't seen her walking around and seen her family with her I would have called the police.

Dave and I took advantage of our continued surreally fantastic weather, drying laundry on the patio and sitting outside with our lunches. That's Dave in the photo above, sitting in the corner behind the clothes, giving Olga a tuna cracker. You can only barely see Olga, standing at his knee, paying close attention to the food. 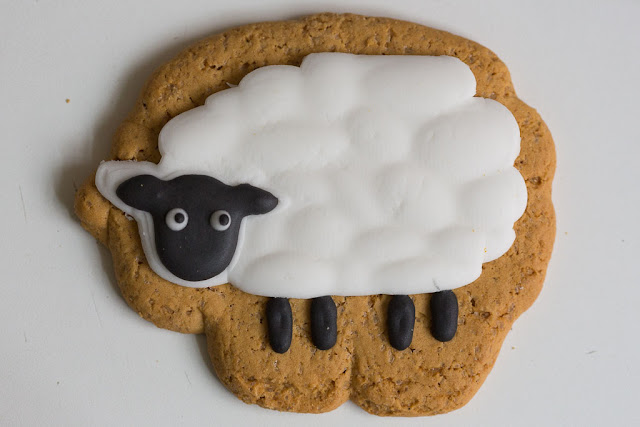 This was our afternoon treat -- a cookie I picked up at the butcher, of all places. (I guess there is a connection between lambs and butchers, but I'd rather not think about it.) It was baked in Shropshire -- a ginger cookie. 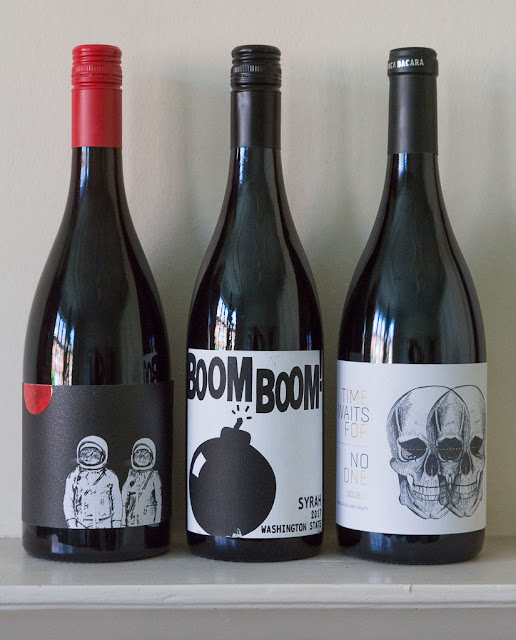 And this was our evening treat. Well, not all of it -- just a portion of that center bottle. I went wine shopping and, of course, bought stuff based on the labels! We've had the "Boom Boom!" wine, from Washington State, before, and the white version of the "cats in space" wine on the left as well. (It's called "Felicette," after the first cat sent into space, by France in 1963. Felicette came back to Earth safely.) Anyway, we'll see what the red is like. The "two skulls" wine on the right is called "Time Waits for No One." Better drink that bottle first!

Last night we listened to our high school's annual drama production, "You Can't Take it With You." It was supposed to be a stage play, of course, but since we can't gather in the school auditorium as usual they turned it into a "radio play" and streamed it online. It was a cool idea and I enjoyed it, once I was able to differentiate the voices and figure out how all the characters were connected. (I've never seen that play so I had no clue about the storyline -- it's basically a light family "dramedy" questioning American capitalism.) Coronavirus innovation, once again!
Posted by Steve Reed at 7:49 AM

Eels from the Sargasso Sea - swimming all over the world before swimming back years later to reproduce where they began. How magical, how cool...if it weren't for human intervention - fishing, weirs and dams, river pollution. It is amazing that they continue...but in the Middle ages how many more eels were there? I know you have been to Ely which of coursedrew much of its income from eels. A very slippery subject to start the day.

I would have been consumed with curiosity about Mrs Kravitz and very tempted to inquire if everything was all right.

We saw an item about eels in the Scottish country TV programme "Landward" I think..they are trying to find out why the population has dropped by over 90%.

A beautiful garden scene.that washing will smell lovely when dry!

Now I want a ginger cookie. It doesn't even have to look like a sheep!
I get the feeling that Mrs. K. is a bit melodramatic.
What a lovely scene with the wash hanging on the garden, Dave giving Olga a tuna cracker.
You're now far ahead of me on the New Yorkers! I need to dedicate a day to the task. I will read the eel article for sure. After listening to "Catch and Kill" by Ronan Farrow, I have even more respect for the New Yorker than I did before.

I love those wine labels. That screaming drama must have been quite disturbing. That's one of those things that really sets your heart pounding. I can't get over all the sunshine you have been having. It would be a perfect time to visit London if it weren't for the deadly virus.

Mrs K screaming sounds like quite a drama. Yikes. In my imagination, drawn from the words you have written of her, I wouldn't have expected her to be loud like that. I always picture her rather tight-lipped and terse. Screaming sounds so out of character.
I wish we were having more sunshine here. Although I have to say the incredible hour-long lightning storm in the middle of the night last night was pretty wild!

You Can't Take It With You, is perhaps one of my all time favorite productions, second only to Harvey with Jimmy Stewart. The original movie was made with Lionel Barrymore as Grandfather. It's good, really good, but not as good I don't think as a later play that was filmed and released on VHS where Jason Robards plays Grandfather. Very few copies of that second one are out there but I happen to own one. It was later digitized and can be found around now. I have no idea if that original copy I have will even play, I know I don't own a machine anymore that might play it. It was a Broadway Play filmed for PBS. Both are excellent.
There is a YouTube link to it which I have never watched, http://youtu.be/mzuKHNvPThw. There is also a Broadway World page that features the 1983 article in The New York Times about the play. https://www.broadwayworld.com/board/readmessage.php?thread=1080140

You and Dave would love them both I think. Barrymore version has been on YouTube for many years. It's about more than just capitalism, certainly basic human rights and competition play a part, but class divisions are the reason I love it so much.

Thanks for reminding me what a jewel I have in my library, it's time to call it up again.

Oh I forgot, we have wild rabbits in our yards in this suburb in Texas where we live. There is one that hangs out by our patio and of course I named she or he as the case may be, Harvey.

It sounds like you all are weathering these troubled times well. Good for you. Enjoy that weather.

Wow! A Shaun the Sheep cookie. Lucky you. I t looks yummy. And those are great wine labels.

I'm struck by how accurately those three bottles of wine speak to the reality in American on this day, as we await the Space X launch, and mourn the deaths of unarmed citizens, and burn our cities down. Sorry, dark thoughts. On a brighter note, i love how you enjoy your back yard, though Mrs. K's scream would have jolted and unsettled me all afternoon too.

Great wine labels! I read part of the article on the eels, then someone moved the magazine, and now I can't find it. Thanks for linking, I'll finish it on the laptop.

Mrs K's scream would certainly mess up your day.

When I was very young, there was no TV. We would gather in the kitchen evenings and listen to our favorite shows on the radio. Listening to that play must have been very interesting. Hope your day was as nice as your photo of Dave looks. Hugs, Edna B.

I know I've said it before but Mrs K sounds like she might be deteriorating mentally. Either that or she's just not quite right to start with. I would have been stressed by hearing that too. And if it WAS a conflict with her maid, I pity her maid.

You've really been having a lot of hot, dry weather. Any sign of a change yet?

I'd buy a ginger sheep biscuit. In fact I'd probably buy several.
And yet another piece in the puzzle that is Mrs Kravitz.
Alphie

YP: Yeah, they're quite imperiled as a species these days. That's part of the reason scientists want to understand their life cycle more completely.

Marty: I was tempted, but I also didn't want to get into the middle of anything. She didn't seem to be in any peril. I think she was just extremely frustrated.

GZ: I love clothes from a clothesline!

Ms Moon: She is definitely a dramatic character. Intense!

Sharon: The sun is nice, but seriously, we need some rain. It's like Arizona around here!

Robin: She normally is very clipped when she gets annoyed. I've never heard her scream quite like that -- certainly not with the doors open and the neighbors around.

Tom: Interesting! Thanks for the tutorial on the various productions! We should take a look so we can SEE it instead of just hearing it. I should have known it would have been made into a movie.

Catalyst: The unrest in America has, so far, not spread here. Though of course we have our own issues.

Cheryl: I didn't even recognize him as Shaun the Sheep! I just thought it was some random sheep.

37P: Interesting how you see modern times reflected in those labels. I hadn't even thought of that.

Allison: It's well worth finishing!

Red: Well, it gave us a jolt of adrenaline, that's for sure!

Edna: I like hearing a story like that, and envisioning everything in my own mind. It's a totally different kind of experience than watching a play or movie.

Jenny-O: Honestly, I have no idea what's going on there. I think she is a smart woman with too little to do, and she tries to micromanage everything and gets frustrated.

THAT cookie! Maybe it was made with lard, like some of the Christmas goodies baked here. And, if I bought one, I would buy based only on the labels. Good work. Mrs. Kravitz sounds a bit frightening. Poor Martha.

Love the cookie! And so would Mike. Although it doesn't look so much like Shaun as it does Timmy's mother or Shirley. Ha!

The cookie looked good, until I saw the wine which admittedly would be my choice just for the labels alone. It’s often how I shop for wine.