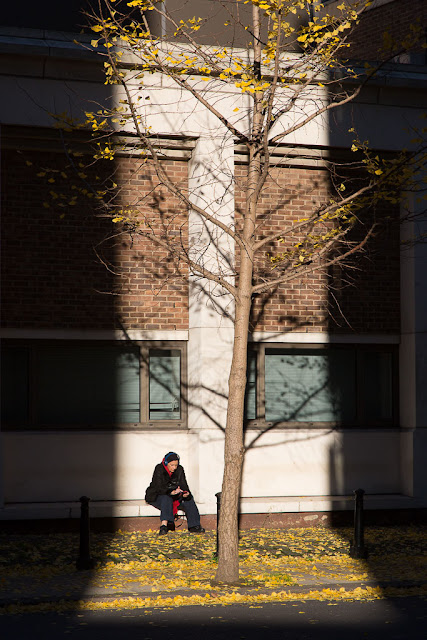 "Hamilton" was, of course, really, really good. I was surprised by a couple of things. I didn't know it doesn't have dialogue -- I expected something along the lines of a traditional musical, with dialogue interspersed by songs. This is more like a rap opera -- no speaking at all. The story is entirely told within the lyrics, and some of the stage effects were magical. At one point the action runs backward, and when that happened, I thought, "OK, this really is a special show."

I think what I love most about it is its improbability. Doesn't the idea of a rap-music stage production of Alexander Hamilton's life sound patently absurd? It's almost as crazy as "Springtime for Hitler," the show cooked up in "The Producers" to intentionally lose money. Add the fact that most of the cast members are people of color and you have a really interesting take on American revolutionary life.

I want to know what Alexander Hamilton would think. I suspect he'd love it.

One really interesting twist, given the London audience -- when King George III first appeared on stage, in his cape and crown, some people applauded! I'm pretty sure you wouldn't get that in America.

Otherwise, yesterday was busy. I worked all morning in the library, hoisting books, and I think I got everything done. Then Dave and I went out for lunch and collected our specially-ordered fresh turkey and some other Thanksgiving supplies. I bought these two bottles of wine: 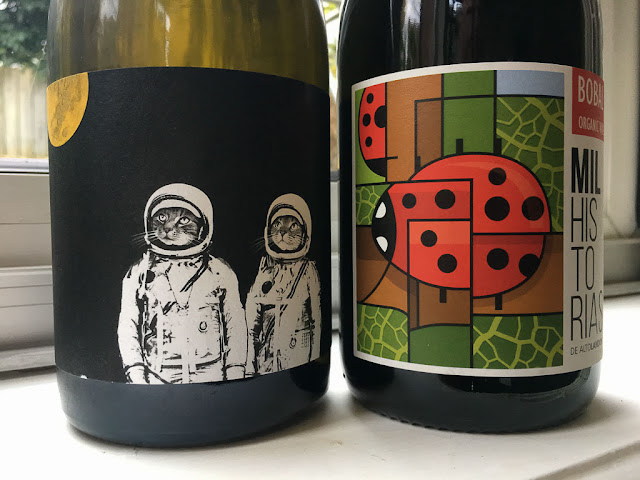 How could I resist astronaut cats in space?! (The wine is called Felicette, named for the first cat sent into space, by France in 1963. Apparently Felicette only flew a 15-minute mission and came back alive.)

I called my mom to wish her Happy Thanksgiving and make sure I know how to make her traditional sweet potatoes, which we're going to try to replicate here. (Note to self, for future reference: bake, rather than boil, said sweet potatoes.) Dave did some cooking last night, making our parsnip soup (there was a major boil-over and a flooded stovetop, but I think he saved the soup) and the chicken/turkey stock for the gravy. Thanksgiving is like his dream day. Most of us might balk at the idea of spending a day in the kitchen, but not Dave! We're having four friends over for dinner -- plus Olga, of course.

(Top photo: Seeking sun in Bermondsey.)
Posted by Steve Reed at 7:24 AM

You're having Olga for dinner? So no more walks on Hampstead Heath then? No more fruitless squirrel chases. I once heard, from a South Korean acquaintance, that roasted dog is delicious. Furthermore, unlike a turkey you get four legs to chomp upon so your guests will be happy.

I didn’t know a cat was sent into space, it sounds like a wonderful dinner and I’m with Dave, I love a day in the kitchen preparing the feast, love every minute of it! Have a great celebration dinner , Happy Thanksgiving! Our Canadian Thanksgiving was in October, long past,

I'm glad to hear that you loved Hamilton! Hurray!
I didn't know there was no script either.
I hope Dave has a wonderful time in the kitchen today. I'm about to get started myself.

I agree about Hamilton, something tells me he would love the play.
I didn't know that a cat went into space either. Or, maybe I just forgot all about it. Cute wine labels. I hope Dave enjoys his day cooking and that you enjoy your wonderful Thanksgiving meal. I enjoy the cooking part too and since I'm going to friends today, I'm going to cook for friends on Saturday. I'm looking forward to it.
Happy Thanksgiving!

Happy Thanksgiving. I'm glad it was Dave who had the boil over and not me. I've never made parsnip soup so I'll have to look for a recipe. I grow parsnips.

I love your review of Hamilton. Makes me want to see it, but of course here in the middle of nowhere California, that ain't gonna happen. Your Thanksgiving plans sound lovely, and that Cats in Space bottle of wine is the coolest. Happy Thanksgiving!

I used to do 20 pound turkeys for the masses. The meal would require a spreadsheet to track and time the activities. Now we're down to just a chicken and I'm kind of at a loss as to when to do what. Perhaps it's time for a new spreadsheet! Happy Turkey day to all three of you.

Oh, what a beautiful photo. It almost looks staged. So nice.

And I did not know that France ad sent a cat into space but I found myself holding my breath until you assured us that she came back alive. Whew. I was really is suspense in -- what? the half second it took to go from fear and apprehension to relief? Good to know that the brain still works in real time.

A very happy Thanksgiving to you and your honored guests. Its 25 degrees F here on the north shore of Long Island, and the good thing is that it frees up space in the refrigerator. All we have to do to cool the white wine and juices and hors d'ouvres is put the bottles and covered bowls out on the back step.

Happy Thanksgiving! Have a wonderful celebration with your friends.

I just finished watching the coldest Macy's parade on record. Brave performers and balloon ranglers.
We had our feast dinner last Saturday so on to turkey soup today.

Judy is not a fan of turkey so we've steered away from that for years. Today we're trying a new recipe for a pork loin, seasoned with garlic and brown sugar and then wrapped in bacon. All done for about 6 hours in a slow cooker! I can't wait.

I wish I enjoyed a day in the kitchen! lol I find holidays so stressful now because everybody comes here for dinner. I still don't feel grown-up enough or organized enough to have this happen, but it happens anyway. We always get through somehow. I enjoy having family here, but not the cooking part.

Happy Thanksgiving, Steve and Dave and Olga -- let us know how the cats in space wine tasted!

I hope you had a good time!

I hope your day was lovely and the food and soup well consumed. we had a fun family gathering at my daughter's house.