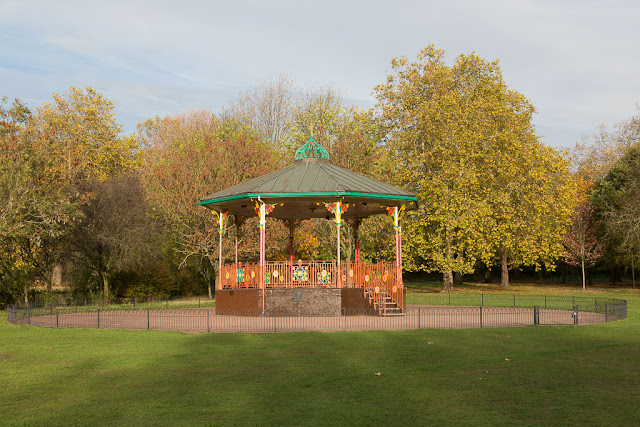 For a long time I've been meaning to take Olga to Queen's Park, southwest of where we live, just to try something new. I didn't necessarily have it in mind when we set out on our walk yesterday, but when we found ourselves headed in that direction I decided to make it our goal.

Turns out, Queen's Park -- though perfectly nice as parks go -- isn't a great place for Olga. For one thing, there are a lot of rules. A placard by the gate lists them all. Dogs have to be on a lead, for example. Also, you can't quarrel, use profanity, play cards, or land a helicopter. So don't even think about it.

The dogs-on-leads rule means there are billions of incredibly fat, lazy squirrels lolling around, which of course drove Olga into a frenzy. In her mind's eye, they were spread-eagled on giant Ritz crackers, green olives in their mouths, a tray of hors d'oeuvres. She nearly pulled my arms off trying to get to them, and did her "insane dog" impression, in which she pants and groans and wheezes and slavers and becomes a general embarrassment.

Because of the insane dog, I only took a few pictures in the park, including the one of the bandstand, above. (Oh, and that's another park rule -- you can't "importune any person for the purpose of taking any photograph." I decided to risk importuning the bandstand.)

I asked another dog owner, walking a very properly behaved small furry thing, where I could let Olga run off-leash, and he directed us to nearby Tiverton Green. 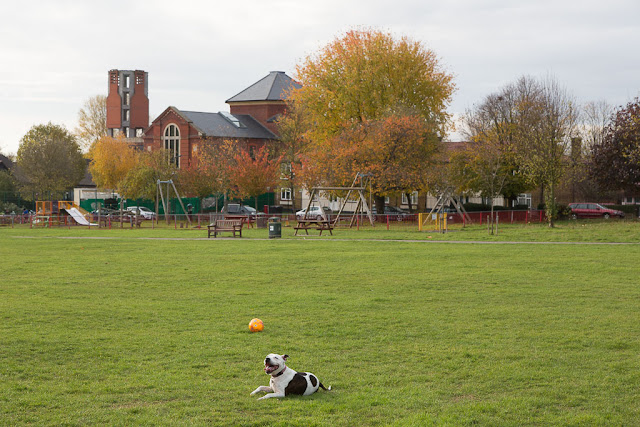 That was a much, much better solution. She chased her tennis ball, fended off an incursion by a German Shepherd who wanted to take her ball, and also found an abandoned orange football to play with.

Afterwards we walked the high street through the Queen's Park neighborhood, where I got a coffee and a pastry at Starbucks. I thought I had a free coffee through my health insurance, but when I got to the counter I couldn't find the payment code on my insurance app -- the app recently updated and now nothing looks the same. So rather than annoy everyone by holding up the line, I paid for everything, and of course the moment I sat down I found the payment code with no problem.

(Oh, you can't be annoying in Queen's Park, either. It's expressly forbidden, according to the posted rules, to "behave to the annoyance of any person." That only applies in the park itself, though, not in Starbucks.)

Finally, as we began the long walk home, Olga dragged me into the Queens Park farmer's market, which was being held in a car park beside the high street. She smelled the oysters, I think, but we steered clear of those. I did buy a pot of beautiful chrysanthemums for the porch, and I felt very autumnal carrying them home.

In the afternoon I cleaned up the garden, pruning back the dead inulas, thistles and cardoon and raking up the fallen leaves. And I watched the Marx Brothers in "A Night at the Opera," which I checked out from the library, mainly because I wanted to see Kitty Carlisle in what might be her most famous acting role. Those Marx Brothers movies are still funny, even after 80 years.
Posted by Steve Reed at 7:08 AM