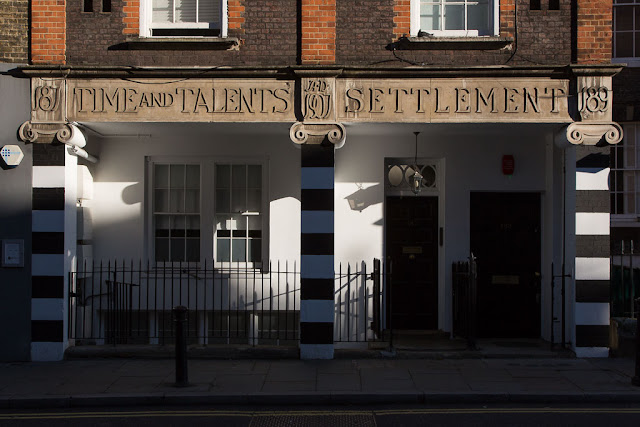 I came across this building while in Bermondsey a few weekends ago. I've photographed it before, but I couldn't resist shooting it again with that gorgeous light spilling across the facade.

I read a terrifying article in The New Yorker (I promise I read other things too) about digital image manipulation -- how computers are getting so good at creating digital pictures and video that anyone will be able to do it. This goes way beyond Photoshop, although that was the first wave of the problem. It's more like CGI for the common man. It's terrifying because people have enough trouble sorting truth from myth with the written word -- imagine what will happen when some right-wing lunatic like Alex Jones or a propagandist like James O'Keefe develops the capability to create realistic CGI videos of the Obamas or other Democratic leaders, for example? We'll see them marching in pro-Communist rallies and giving Black Panther salutes and burning down churches and gleefully performing abortions, and people will believe it.

As a photographer, I get a little sick at the idea of computer-generated imagery. I still think of photos in a very old-school way -- that they are meant to capture fleeting moments realistically, as they really happened. "Seeing is believing," that kind of thing. "A Picture is Worth a Thousand Words."

I fear the day when that won't be true -- when a picture won't be worth squat, or may only be destructive. Images are such powerful tools, and when used correctly and truthfully they're incredible storytellers. Stripping them of that power is heartbreaking to me. And yeah, you could say Photoshop has already made them unreliable, but not to the degree that they may become unreliable in the future. I guess it will all come down to where they're published, and learning to trust certain sources, just as we do now with news -- for better and for worse.

Lord! The world is so complicated.

Apropos of nothing, I found that little zebra on the sidewalk yesterday. Oh, and I finished my H. E. Bates book, "The Sleepless Moon." I like his writing, but man, I'm not sure I've ever read about so many uniformly unhappy people! (It was written long before Prozac.) Now I've just got to catch up on these New Yorkers!
Posted by Steve Reed at 6:24 AM

What a curious inscription across the face of the building: "Time and Talents Settlement." Do you have any further information about the building's original purpose? Not that I want you to spend hours on research, but you do work in a library! LOL

I took my own advice and googled it. And here is what I found on the "Historic England" website. (I won't include a link - anyone can google it for themselves).

"Built as a hostel for the Time and Talents Association, as announced in the Arts and Crafts lettering in carved stone frieze that reads 'TIME AND TALENTS SETTLEMENT'. The building is of purple brick with red brick and stone dressings... "The Time and Talents Association was an Anglican quasi-missionary organisation set up in 1895 by West End women to help young working girls and women, and was a prominent part of the 1880-1914 settlement movement.
"Young women came in to Bermondsey from more prosperous areas and the building hosted clubs, district visiting and campaigning around issues of girls' safety at work.
"This building is listed for its imaginative yet contextual Arts and Crafts design by an eminent architect to house a historically significant settlement for working girls and young women."

Further information says it is now "studios and a flat" and a Grade II listed building.

Ah, the things we find out when we least expect to - thanks for the lead.

I saw something on the BBC news channel about the computerised manipulation of video film. It is already possible to have a video - say of Theresa May and to literally put words in her mouth. Not just dubbing in a different narrative but moving her mouth and jaw at will to perhaps say..."I have to admit that my Brexit negotiations have failed completely and it's time for a second referendum". When techniques like this are used widely we will no longer be able to claim that "seeing is believing".

There was something similar to YP's BBC clip on our CBC (Canadian Broadcasting Corp) on this topic. It isn't too hard to see that a video has been doctored (eg, teeth will tend not to show when the mouth is moving/open) but it's only a matter of time before it will be perfected. The only advice the host had for detecting it, beyond the already mentioned imperfection, was to check with your gut. I know a lot of people whose gut will tell them exactly what they want to believe and nothing else and therefore that does nothing! Video is already something for which we need to consider the source -- witness the video issued by the White House re the Jim Acosta vs microphone intern video that was doctored, a fact that was later admitted. And I agree -- life IS complicated!

yes, we are entering a very dangerous time where seeing should not be believing. on the other hand, a video of Mitch McConnell prancing around in women's underwear would be a hoot.

I can't keep up with my New Yorkers either. They've become yet another source of guilt.

The future scares me in every way. We're headed down a very predictable path, and I can't figure out why we can't stop it.

I read a similar story a year or so ago and found it very frightening. It is scary to think about this being done especially in this age when so many people believe such outlandish things.
After all, I just heard a woman say yesterday that Donald Trump was a good Christian. What planet is she living on?

I think the new digital methods of photo enhancing is taking away the skill of a photographer, so they have computer skills yes but I prefer an untouched photo, its a more intimate view of the photographers work, give me old school anyday, I'm beginning to dislike computers,,why does everything have to be enhanced,, what's wrong with natural and raw,, just because we Are able to do all these things in and on film still doesn't mean we should. I'll just crawl back under my rock now lol,,

I saw a short video the other day of clips from a Monty Python movie in which Teresa May's face was inserted as one of the characters and she was speaking, too. Very strange.

Catching up on New Yorkers! Dear god, goals! My stack makes me feel like such a slacker. Cute zebra and YES, about the fake everything, fake life, nothing is true...I unplugged for about two days, I felt happier.

I remember the photo the first time!

There goes the old adage 'The camera never lies.' I recall a conversation with a TV news cameraman in the mid-eighties about the ease of manipulating the audio & visuals of TV news. Imagine how this deception has been refined in the intervening years!

David: Thanks for the research on the building!! I remember Googling it myself when I took that first picture and learning that it was listed, but I didn't remember the rest of the history, so I appreciate your effort.

YP: Techniques are already available, but to my eye you can usually tell when something's been altered. Someday, though, that won't necessarily be true.

Jenny-O: Yeah, that's what's worrisome about the "gut check." It works for reasonable people. But if you're an Alex Jones follower, I'd suggest that your ability to gut check anything may be WAY off!

Ellen: Ha! Especially if it forces him to resign! LOL

Ms Moon: I do OK, but they tend to get 3 or 4 deep before I go on a binge and try to get through them before launching into another book.

Robin: I agree, but maybe we shouldn't freak ourselves out. Maybe things won't be that bad. I sometimes worry that I'm just being negative.

Sharon: Oh, good grief. I've heard a lot of nonsense about Donald Trump but that is plain ol' willful ignorance. There's not a Christian bone in that man's body.

Laurie: I tend to agree that a good photo shouldn't need much processing. The computer can't compensate for the eye of the photographer!

Linda Sue: If the stack gets too big, I say throw it out. We don't need that kind of guilt!

John: Wow! That is some serious memory! That was five years ago!

Red: I think we already ARE paying the price. :(

Alphie: Yeah, and back then it was just a matter of editing and splicing film. Now, with digitization, it's possible to make INCREDIBLY deceptive images and videos.