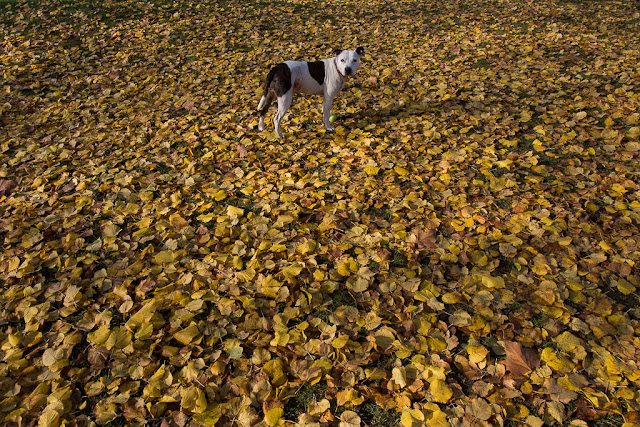 We're coming down to the last of our seasonal leaves -- the hazel in the garden is bright yellow, its leaves fluttering down like butterflies, and the Japanese maple is almost completely bare, as is the walnut. When I took Olga to Fortune Green yesterday the ground was carpeted by the plane trees and the limes.

It's been a particularly golden fall. Yesterday morning, looking out at the garden, Dave said, "I don't remember there being so much yellow last year." Whether it's really different or we've simply forgotten is anyone's guess.

Olga had a little visit with the vet yesterday morning. We discovered two more lumps up near her shoulders -- small ones, but deeper than the superficial ones we recently had removed from her hind legs. The doctor felt them but said they're so small he's not sure he could even biopsy them, and given that Olga's last lumps were benign, he feels it's likely that these are too. We're going to just watch them and see if they get much bigger. I was worried they were lymphatic tumors of some kind, but the doc said he thinks they're just lipomas (fatty deposits). Why do we have such a lumpy dog?!

After the vet Olga and I had a nice walk through Cricklewood. Then we came home and I finished my Derek Jarman book. There's apparently another volume, but I'm not sure I'm ready for that -- it covers the years just before he died, and I feel certain it would be full of medical struggle.

On Friday night I went out to a bar in Soho with some colleagues -- a great place with a courtyard, perfect for an autumn evening. It's ostensibly an LGBTQ establishment, but either my gaydar is completely on the fritz or a lot of people there were pretty mainstream. Which doesn't mean they're not gay, I suppose, but one of the peculiarities of our sexually flexible and gender-fluid society is that gay seems much less distinct.

Anyway, after a few drinks, a friend and I peeled off and went to a gay pub nearby and joined the crowd on the sidewalk outside. We were talking about Trump when a British guy joined the conversation, and we were all complaining about the political state of things until the British guy got on a riff about convict labor in the USA and celebrities hiring private firefighters in Malibu. My friend, who's from California and who was also quite drunk, took umbrage -- I think he felt the British guy was mischaracterizing his home state and ignoring the travails of the common man. He got quite bristly and I was thinking, "Holy sh*t, we're going to be in a bar fight! In a gay bar!" The British guy -- who really had said and done nothing wrong -- moved away and I got us out of there and headed for home. Crisis averted!
Posted by Steve Reed at 6:40 AM