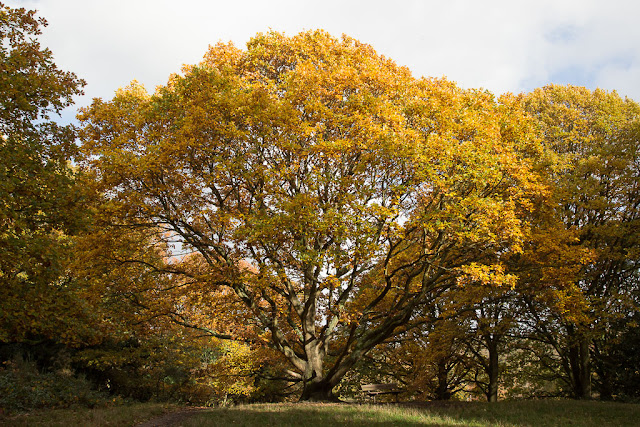 Well, yesterday wasn't quite as chaotic as I thought it might be -- the roofers didn't show up. I guess they don't work on Saturdays.

But the the moth guy did show up, around 11:30, at which point Dave, Olga and I were banished from the house for three hours. The exterminator, Greg, who had an Eastern European accent and who seemed as unconvinced as us that a treatment was even necessary, said he would be spraying by hand. I'd envisioned more of a "room fogger" approach, but apparently not. We just had to be gone until it dried.

So Dave went to a cafe on the high street to do some schoolwork, and Olga and I went to the Heath, which was beautifully autumnal. We even had sunshine, because yesterday's rain didn't materialize until the afternoon. 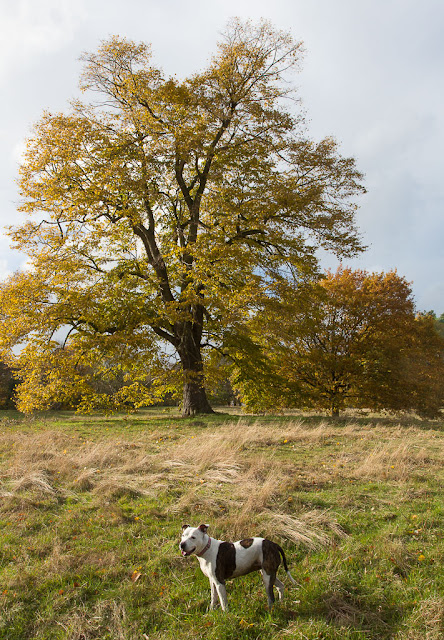 As usual, Olga was a squirrel-killing machine. (At least in her own mind.) She makes passers-by laugh, she is so maniacal. At one point she was leaping around the base of a tree, barking, and a guy walking past said, "Bark it down! It will fall from fear!"

After our long walk we got home to find the flat pretty much the same. I only saw one area where spraying was obvious, and there was no smell at all. I stayed out of the dining room, where the carpet is being replaced this week and where these erstwhile moths (and hence the spray) are supposedly concentrated.

My ever-considerate spouse bought me a bottle of wine at OddBins, even though he hasn't been drinking anything himself because of his Crohn's. So I was able to have a few glasses last night as we watched TV -- a Netflix show called "Safe," with Michael C. Hall, which is pretty good! We binged three episodes!
Posted by Steve Reed at 8:18 AM