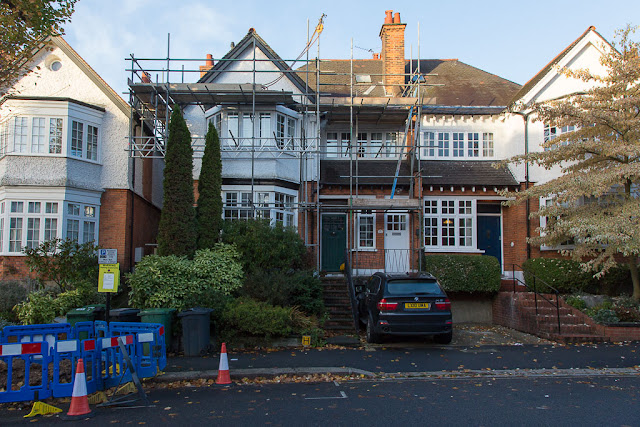 Here's what our humble abode looks like at the moment, all scaffolded up for roof repairs. As I said in an earlier post, Dave and I haven't been involved in arranging any of this work. It's been handled by our landlord and the owner of the upstairs flat. It's basically just happening to us.

We live on the ground floor, with the green door. The white door leads to the upstairs, where the Russians live. Mrs. Kravitz lives in the house on the left. I don't even know the name of the woman who owns the house on the right -- the one connected to ours -- but I believe she has the whole structure. It's not divided into separate flats like ours is. 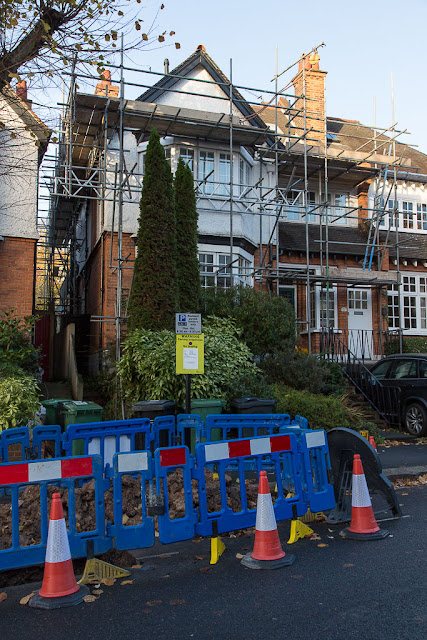 Here's another view, so you can see how extensive the scaffold is. It runs down the side of the house and also around the back. It went up pretty quickly -- I was impressed, considering the workmen had to navigate our jungle of a front garden. (We don't maintain the front -- that's the landlord's responsibility, probably in conjunction with the Russians.)

That big hole in the roadway, with the blue barriers, is a separate project entirely -- something to do with Thames Water. I have no idea what's happening there.

Once again, I read a fascinating article in The New Yorker yesterday, this one about a team of New York lawyers who moved to Oklahoma to represent poor women entangled in the criminal justice system. Apparently Oklahoma incarcerates women, particularly poor women, at above-average rates. The article mentioned the case of Tondalao Hall, a woman whose abusive male partner broke their infant son's leg and ribs. The man was sentenced to eight years of probation for inflicting the abuse. But Hall, who wasn't even home when the child was injured and who called a doctor when she saw that something was wrong, was charged with failing to protect her children -- and sentenced to THIRTY YEARS IN PRISON! Have you ever heard of a greater miscarriage of justice? The ACLU is fighting her case, but really -- it's perhaps the starkest example I've ever seen of a woman being made to pay for the crimes of a man. Appalling!
Posted by Steve Reed at 6:56 AM

It is a very attractive house...well, it would be without the scaffolding!

Surprise, surprise - Tondalao Hall is black! It is just about unthinkable that a white woman in identical circumstances would have been locked up for thirty years. I am surprised that I haven't already seen this case on "Democracy Now".
P.S. I hope that the scaffolding does not cause any damage to your outside area and indeed your much-loved garden.

All that scaffolding just to repair the roof. I notice that more and more scaffolding is being used even just to paint the front of the houses around here. It's probably health and safety rearing its head again. I (being old,lol) can remember when everything was done on ladders. The roofers used to take the tiles up in piles upon their heads and Painters worked off of the ladders. Of course the scaffold firms are making a lot more money through this so I don't expect they mind.

Your house is very nice to look at. You are in a similar position to us but we rent the top maisonette and the bottom is sold. We've rented this since 1965 so I'm sure the landlords will be pleased when we pop off as they will be able to rent at a much higher rent. We are controlled tenents, not heard of now.

The roofers mean business by the look of the scaffolding. The new roof will look good on that beautiful building. I wonder if the upstairs tenants have been having problems with leaking?

The case of Ms Hall is horrifying. I'm glad this is being looked into, along with others.

I showed Mr. Moon one of the pictures of your house and he said, "Nice!" I agree.
If I were a roofer I think I would much prefer scaffolding to ladders.
Injustice to women? And women of color? Really? In America? No way! Said no one with a functioning brain, ever.
What purpose would such a sentence even serve? I am so grateful that there is someone who cares enough to do something. That, at least, is heartening.

I assume the scaffolding is to give the roofers access to the roof, in which case why would they need scaffolding on the side of the house? and the two houses share one roof. so only half the roof is getting redone? I don't see how that will fix anything as water will travel underneath the shingles if the other half is also in need of repair.
and if '(white) women are the niggers of the world' as John Lennon put it, imagine how low is the status of black women. there is another case where a black woman was jailed for defending herself, in her own home when she shot at her abusive husband? boyfriend? who was forcing his way in. didn't shoot him, just shot at him.

Your last paragraph describes something that is impossible to understand. Where's the idea of justice for all?

Justice is just a seven letter word, Patriarchy in a magical ten letter word with all the power and heft of GOD! So it goes, great that lawyers from up north are trying to take it on.
That article is worth sharing, and I will. Thank you.
Your house probably wondering what it did wrong- jail and banging , oh dear. hope the workers are thorough and quick!
Surprised your neighbor to the left has not made it an issue.

Wow, they have the whole house covered. I wonder how long it will take them to complete the job. As for the NYTimes article, I don't know where to begin. How any decent person could let that happen is beyond me.

News of the world is almost unbearable sometimes: the injustice, senselessness, and cruelty of it.
I retreat into my life of peace and tranquility, where the news is just a "story" from "out there." I know how fortunate I am and wish everyone else could be, too.
-Kate

It's a gorgeous building. I hope the work is done quickly and the scaffolding taken away.

That IS outrageous! People just suck, seems like most of the time these days. Sigh.

I love how your house looks.

I adore the proportions of the house , Edwardian I take it

ah, the joy of having your dwelling banged upon. Impressive scaffolding. Years ago, I lived in a new housing development, new homes going up all around us, even 5 feet from my window. Always with the power tools at 7:30 am.

I'll look at my New Yorker for that article. I thank heavens every day for the ACLU and I'm so delighted that their financial contributions quadrupled after Drumpf's election.

Frances: It IS! I wish we owned it, but alas, we merely rent.

YP: Oh, absolutely. Race is a huge factor in many of these cases. Poor white women suffer at the hands of these prosecutors, too, but I'm not sure they suffer as egregiously.

Briony: How fortunate that you have tenant protection! Dave and I were wondering about the scaffolding and why it's necessary. In the states, roofers routinely work without scaffolds. But the roofs are probably not as steeply pitched as this one -- at least, not usually. I'm sure it's a health and safety law of some kind.

Jenny-O: They said there have been leaks, but I don't have the details. They have a skylight that from the outside looks a bit questionable.

Ms Moon: Well, exactly. All that sentence does is guarantee that the woman can have no relationship with any of her children, thus consigning THEM to a life of instability and perpetuating the injustice for another generation.

Ellen: I guess they need it at the side in case they fall. I have no idea, really. The "semi-detached" style of our house is very common in London -- many, many houses are attached to their neighbor at one (if not both) walls. I have no idea how this works in terms of roofing but the neighbor's house is pretty well kept, so I don't think we're going to be getting water intrusion from her shingles. (She might be getting it from ours!)

Red: It really is unfathomable, isn't it? That is not the America I was raised to believe I lived in.

Linda Sue: I'm surprised, too, but we haven't heard a peep from her. Yet.

Sharon: It's supposed to take about a week, but I'm betting longer!

Kate: It really is a shock to the system. But at the same time, I guess it's important for us to know such things go on. That way we can do something about it -- a limited something, like donate to the ACLU or march in a protest. Every little helps, as the Tesco ads say!

The Bug: Well, this is a particularly outrageous case. For all the people who suck, there are lawyers like the ones portrayed in the article, fighting the good fight. Right?

Tara: These guys don't start that early, fortunately. By the time I leave for work at 8:30 they're not working yet. And when we come home they're done. So who knows whether anything is actually happening! I've been a longtime donor to the ACLU but we ramped up our donations after Trump.