Moth Man, and a Quixotic Crusade 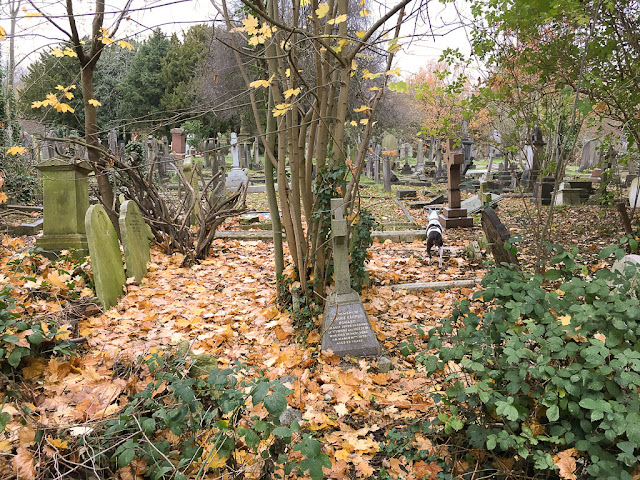 Yesterday the "moth man" came for round two of our fumigation -- the last one, fortunately. Just like last time, we had to leave the flat and be gone for 2-3 hours. To make things more challenging, it was rainy and damp outside and Olga was not enthusiastic about walking anywhere.

So we ambled down to the High Street and went to brunch at the Alice House restaurant, where I had a kale-sweet potato-sausage hash. Olga curled up under the table on her towel and seemed quite happy just to be warm and dry. I ran a few errands nearby, picking up the next two volumes of Karl Ove Knausgaard's memoirs at the bookstore and dropping off some cleaning -- and we managed to kill our two hours of time.

By then the weather had cleared up a bit, so while Dave went home I took Olga to the cemetery. She was a wild thing, happily chasing squirrels with abandon. 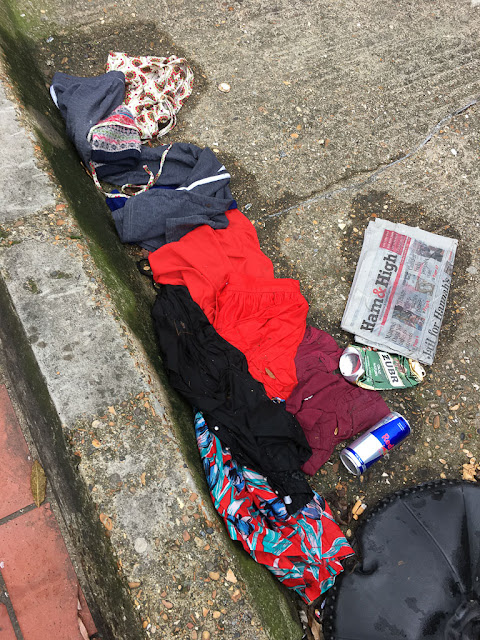 I don't know about you, but this is the kind of thing that drives me crazy. Not only is it litter, but it's perfectly good clothing that has been needlessly abandoned beside a footpath where I walk the dog. This was only part of it -- there was another pile nearby.

I've read that in our era of "fast fashion," or cheap imported clothing available at low prices, things get worn and discarded so quickly that municipal waste disposal systems struggle to keep up. Apparently there are people out there who are so obsessed with themselves that if they're shown on Instagram wearing any given item, they then feel they have to throw it away. Studies have shown people buy twice as much clothing today as they did ten years ago.

Anyway, I have no idea what was going on with this particular assortment, but I picked it all up, put it in a trash bag, and brought it home... 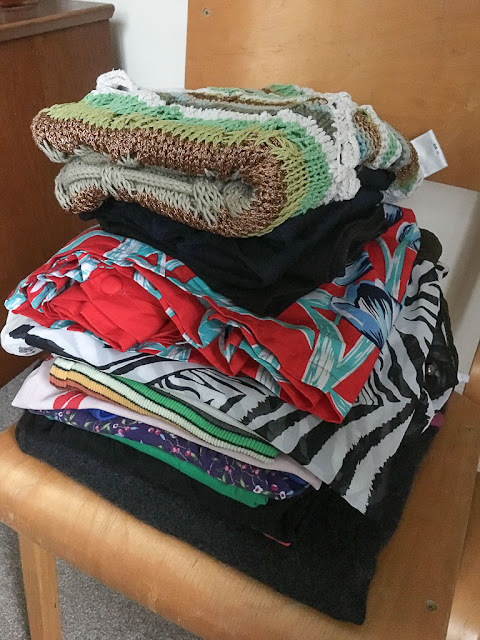 ...where I ran it through the washer, dried it and folded it. (Because I didn't have enough laundry to do this weekend -- ha!) Then I took it to Oxfam. There was nothing wrong with any of it -- no obvious holes, tears or stains, nothing inappropriately intimate. Some of it was in dubious taste, filmy zebra prints and that sort of thing, but to each his (or in this case her) own, right?

Anyway, hopefully it will now find a second life.
Posted by Steve Reed at 6:06 AM