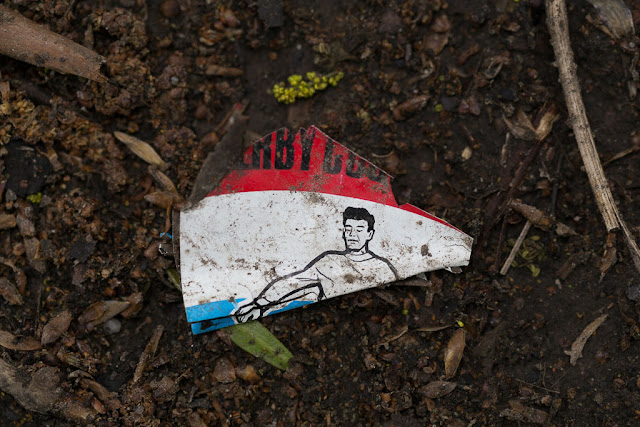 Here's something you're not likely to see again on Shadows & Light -- a sports-related post! In fact, it may be my first.

It's only tangentially sports-related, though. While I was walking on the Heath with Olga a couple of weeks ago, I saw this bit of a shiny sticker or decal lying on the ground in an off-the-beaten-path wooded area. I'm always intrigued by interesting old logos, graphics or artwork, so I picked it up and put it in my bag until I could take a closer look.

When we got home, I carefully unfolded and scanned it, and this is the image I got: 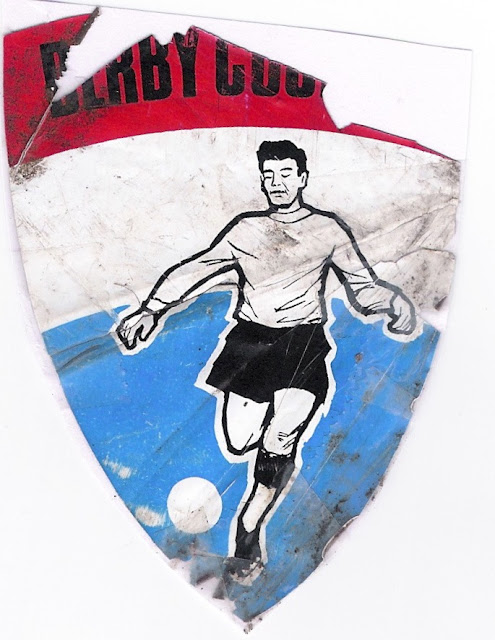 (I had to tape it onto some paper to get it to lie flat.)

The words at the top, I believe, say Derby County, which is an English football club. Their nickname is the Rams. I can't find a similar Derby County sticker or logo anywhere online, though, which makes me think it's either quite old or it's a different team entirely and I'm simply misreading it. What do you think? (If you have any opinion at all on this, and I won't hold it against you if you don't.)

Sorry again about the misery of yesterday's post. I was happy to hear that many of you have your own rat stories -- it made me feel less alone! I bought a couple of snap traps yesterday, but they weren't used overnight and the rats have gone silent, so I assume they've died. I'm going to see what I can do about cleaning up the remains but I'm not sure I can get to them. The exterminator assured Dave we wouldn't smell them if we left them under the house, but that seems unlikely.

I'm almost done with library inventory -- I ought to be able to wrap it up today. So far we're missing a fair amount of stuff -- about 75 items, maybe? This was our first full academic year since we removed our semi-functional security gates, which used to beep if anyone tried to leave the library with something they hadn't checked out. The gates were expensive to maintain, so we decided to just get rid of them and go to an honor system. We knew a little more stuff than usual might go wandering, but I think we may have lost more than we expected. Of course, a lot of it could still come back, if people simply forgot to check something out and later return it anyway -- and it's been an unusually chaotic year, especially just before the school closed in March.

This leaves open the question of what I'll do at work next week, but I'll cross that bridge when I come to it.
Posted by Steve Reed at 6:18 AM