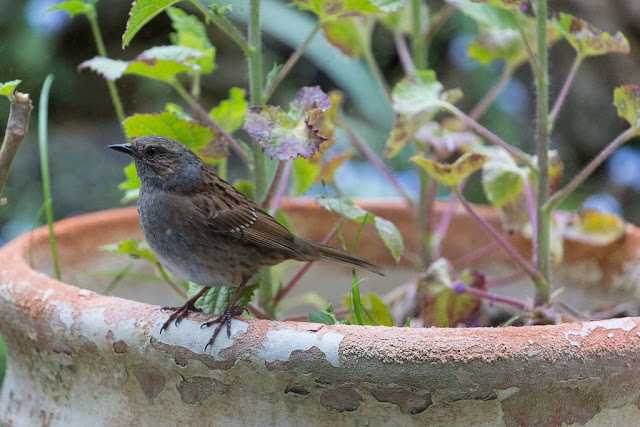 Come into the garden, its magical trees
Dapple the sun as they sway with each lazy breeze
They'll set your mind at ease

So begins Carly Simon's song "The Garden," from 1971, still a favorite of mine. It seems appropriate for today's post because aside from Monday's London walkabout, the garden is where I've been spending virtually all my waking hours.

It's in an especially fertile period, when everything is blooming and the critters are nesting. Little brown dunnocks, like the one above, are chasing each other through the branches in their amorous dance, and we've seen tits and robins and magpies and parakeets on the feeders. The parakeets have finally figured out how to fit their heads between the squirrel-proofing bars on the seed feeder, so they can snack all they want. 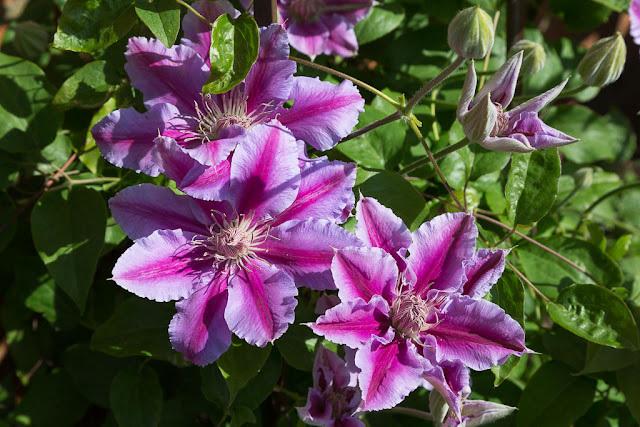 Here's our clematis, which is blooming like crazy right now. All the newly potted dahlias have sprouted and are growing by the day.

Most of yesterday, though, was spent working, rather than mooning about under lazily swaying Simon-esque trees. Remember how I mentioned dock, that pestilential weed that bedevils English gardens and fields? Even the UK government has classified it as noxious. I got to work on clearing ours. 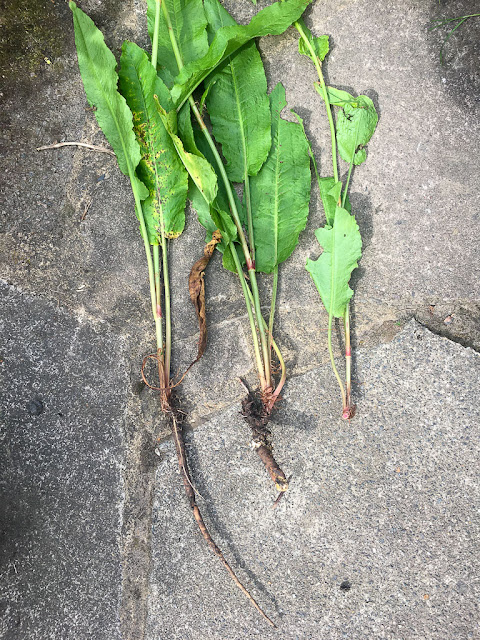 The problem with dock is that you have to pull it up by the root. Leaving even a little bit of root apparently allows it to regrow. And getting the whole root is a challenge because it's a long, brittle taproot and it's usually very securely anchored. Above you can see that I did a good job pulling the one on the left, a so-so job in the middle, and a terrible job on the right. That right-hand plant will probably be back in a matter of days. 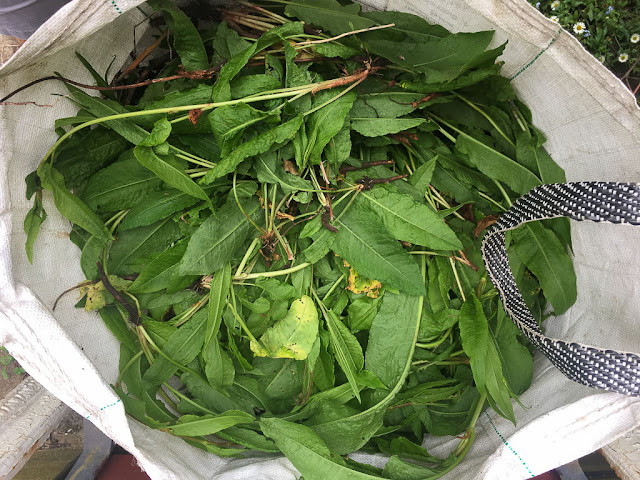 But look at how much I took out! I was proud of myself, even if some of the roots did break and I'll have to revisit the situation one of these days. At least I caught them before they set seed. (Apparently the seeds can remain viable in soil for fifty years!) I also took out other weeds and mowed the grass.

Someone asked in the comments a few days ago if dock also grows in North America. According to Wikipedia, broad-leafed dock (Rumex obtusifolius) is found on all temperate continents. There are many other types too, all broadly known as docks or sorrels, including some that I remember from my years in Florida. I'm not sure they're all as problematic.

In other news, my employers are talking about having the school library staff come back to work, even though classes will not resume on campus for the rest of this school year. I guess the plan is to have us available to check out books for students and their families -- once they're allowed to revisit campus under government restrictions -- before the start of summer break. I'm fine with that, provided we come up with adequate safety measures and controls. The details are still being worked out, but my furlough ends as of this coming Monday so I guess I could be working as soon as next week -- probably on some back office projects initially.

My flight to Florida in June has been officially cancelled by British Airways, and in exchange I applied for a voucher to use in future travel. I thought it was unlikely that trip was going to happen. Dave and I still haven't heard about our planned trip to Brazil in July, but I'm sure that's pretty much scuttled as well. Last I heard, Brazil wasn't doing well on the coronavirus front, partly because they have a president who's just about as disconnected from science and reality as Donald Trump.
Posted by Steve Reed at 6:06 AM