Lockdown Art and a Cold Snap 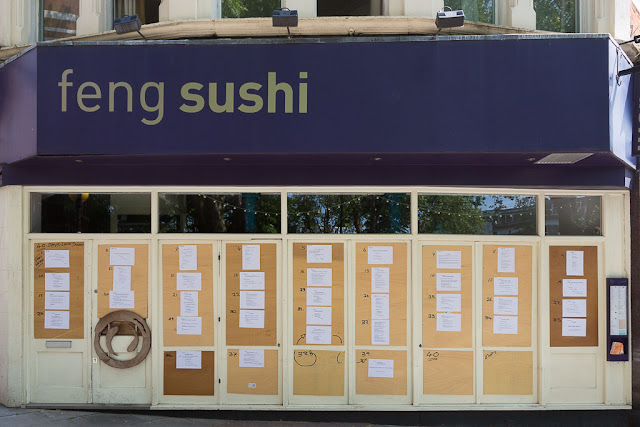 Someone has converted this boarded-up restaurant around the corner into an art project called "40 Days -- Lock Down." Poems are laid out horizontally, one for each day, and numbered 1 through 39. Number 40 is still blank, and beside that it says, "End...?" 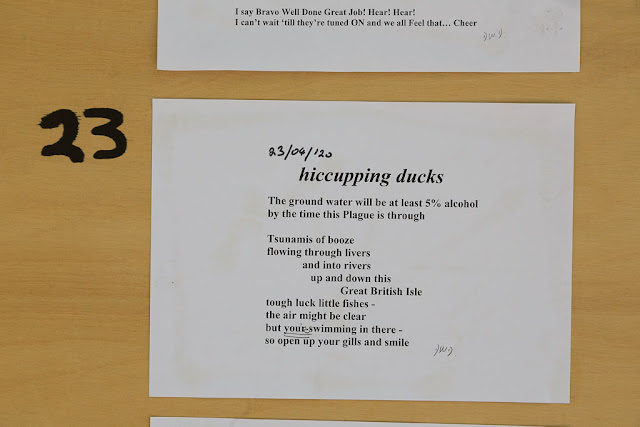 I haven't read all the poems, but here's a random example. I love how the grammar police intervened on this one.

Our lockdown isn't ending, but it's also not quite a lockdown anymore. We're not sure what it is, to be honest. The government has decided to change its official "Stay Home" demand to "Stay Alert," which has prompted a lot of head-scratching. Boris has said that people who can't work from home should now go to work, and we can all be outdoors more (exercising for unlimited times and even sunbathing -- not that I ever sunbathe). There will be a phased reopening of schools and shops beginning June 1. Restaurants and pubs, though, will stay closed until at least July.

This announcement comes at a perfect time, since I'm due to return to work this morning. We'll see what that's like. Fortunately, I live close enough to walk, so I don't have to brave public transport (still not recommended). And most of the school is still closed so I shouldn't encounter many people.

Apparently there's a guy walking around North London wearing a medieval plague doctor outfit. I'm glad some people are being creative in these crazy days, making life interesting for the rest of us. 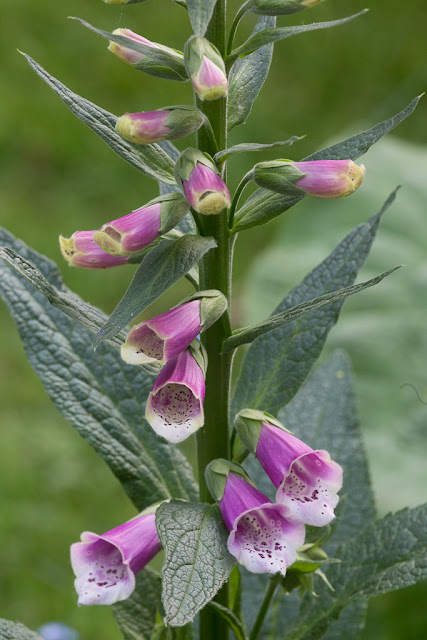 Our foxgloves, which you may remember I grew from seed last summer, have just started flowering. I thought they were supposed to be apricot-colored, but this one (above) is clearly more purple. It also looks a little different from the other plants -- more robust and darker green. I think some mutant seeds got into that packet.

Our cold snap has arrived. Right now it's 40ºF, and I was lounging on the lawn in shorts only yesterday morning! Temperatures began to drop in the early afternoon and steadily plummeted. It's certainly a dramatic change, considering we just finished the sunniest and one of the warmest Aprils on record.

I brought two of our five dahlias inside just to hedge my bets. I'm sure they'd be fine outside, because we're not getting frost, but I didn't want to lose all of them in a worst-case scenario. I also brought in our new lupines because they're quite tall and we were getting gusty winds yesterday evening. (We bought a second lupine, a hybrid called Rachel de Thame, after a well-known gardening television presenter.) Plant drama!

I called my mom yesterday to wish her Happy Mother's Day. We had a quick conversation -- about ten minutes, and once again I got three "I love yous" and lots of laughter. She seemed to think it was pretty funny that I was unable to send her flowers. Mom has become quite a character in her old age.
Posted by Steve Reed at 6:23 AM

It was a "chilly" 62F when I walked on the beach this morning. It made my ears hurt. I'll shut up now.

I just checked the most authoritative English dictionary in the land...

"lounging on the lawn in shorts" = sunbathing

See...I am already staying "alert" like a dog fox.

Good luck getting back to work. Your leader gave very confusing guidelines from what I've heard elsewhere. Nice that your Mom gave you three I love yous.

Our guidelines are getting somewhat hazy too. However, I'm staying home.
Love your foxgloves.
Enjoy your time at work. Sort of a dream- no patrons to disturb the peace of the library. Sort of weird, too.

Yesterday morning it was only 35F (so another cold bout might be headed your way across the Pond), but then it is supposed to be 80F on Friday. Better than New England where some received 6" of snow this past weekend. Our April was cold, wet and windy--so bloody windy, so will welcome some better temps. Just want the humidity to hold off.

Glad the call with your mom had some laughter. A good thing.

We're going to keep on wearing masks until there's a vaccine. That's our plan. Social distancing is our nature anyway so we just keep on being our quiet selves. I'm glad you're going to walk to work. Stay as safe as you can. Love the poetry wall. What a great idea. The foxglove is beautiful. Ours are about to bloom as well. Glad you had a good Mother's Day call with your mom.

The first thing I thought when I clicked onto the link for the Plague Doctor was, Wait. Can you just go out and buy a Plague Doctor costume? Are they for sale at costume shops, or do you have to know someone who works in the Historical Drama Dept of the BBC? Is this what happens when you live in a country where the Plague of 1656 is recent history?

If a guy walked around Philadelphia wearing that get-up, he'd be mugged. No one, I repeat, NO ONE would understand the humor.

Ya wouldn't want to know how cold it is here this morning!

That's interesting that your restaurants won't open until July and ours are allowed to open today. I think today is a bad idea but, we have a Republican governor so he seems to be following what the President wants. We'll see how that goes. I now know four people who have had or are still fighting the virus. It's not something to ignore.

perhaps that purple foxglove is one of the ones your co-worker gave you. of course Texas is relaxing restrictions and opening up even as infections and deaths rise. we're staying put as much as possible. not too many people wear masks here in this small town.

While I'm not too worried about going into a store or strolling a street, the absolute last place I'd ever want to be is on a subway. I pity those poor workers in big cities.

Your Foxglove is gorgeous! We're opening a few things slowly, with restrictions. It's really too soon to be opening everything all the way. I'll keep using my mask and gloves and distancing. You have a super nice day, hugs, Edna B.

I love the poetry wall - very creative! Mike was really disappointed in our local grocery store. The last time he'd been (a month ago), they were being VERY strict and all the staff were wearing masks. He went on Friday & no one was wearing a mask & all their other restrictions were gone too. He's not going there again (the stores near where his father lives are doing a lot better job of trying to contain things). I wonder what changed? Did the employees rebel or did the customers? In any case, I'm with Robin - when I go into a store I'm wearing a mask until we get a vaccine! Although after reading this article I realize I'm much more likely to get COVID at work: https://erinbromage.wixsite.com/covid19/post/the-risks-know-them-avoid-them

He doesn't sunbathe, he says, yet he lounges on his lawn in shorts. Never mind, I want a plague doctor outfit, including the mask.

The poetry wall is great and the correction is the best part of the poem.
I read once about the plague dr mask and it said the beak contained herbs that were believed to be beneficial for combating the illness and also helped disguise the smell of dead bodies. Probably helped with social distancing, too.
Good luck with outguessing the weather and keeping your flowers safe.

YP: OK, I think of sunbathing as stripping down to your bathing suit and laying out to get a tan. I do NOT do that. But yeah, if you count reclining in the warm sun fully clothed as sunbathing, I am guilty.

E: Yeah, it's all very perplexing. People have no idea what to do.

Ms Moon: It IS weird, but I'm used to working in the library with no people around -- I often do it at the beginning and end of school years and on teacher planning and conference days. So in a way it's normal, too.

Mary: I don't quite understand the ways that our cold weather is related to North America's cold weather. I need to look at a worldwide weather map.

Robin: Sounds like you have a good plan for managing all this!

Vivian: It IS pretty funny, isn't it? It looks like a store-bought outfit to me (particularly the mask). I'm sure you could get one on Amazon! Would people in Long Island understand it?!

Sharon: That IS interesting. I'll be intrigued to hear how well things go!

Ellen: The ones my coworker gave us are still too small to bloom. In fact, I think they'll bloom next year. This one definitely came from the seed packet. Funny how unpredictable seeds can be.

Marty: I agree, especially at rush hour! WAY to much closeness.

Edna: It sounds like a good idea to keep distancing as much as possible. I'll be doing the same here, though I still haven't taken to wearing a mask.

Bug: Yeah, I wonder what the story is with that store? I don't wear a mask myself but aside from grocery shopping I'm never really in a place where I might need one. The authorities (at least that I've read) all say you don't need one outside.

Catalyst: I guess I'm thinking of sunbathing in the tanning sense -- like lying out smeared with oil and shirtless. Florida-style sunbathing -- that I DON'T do!

Penelope: I've heard that about the plague masks -- in fact I was just explaining to Dave why they had the big long beak. I imagine that outfit must look VERY weird to people who don't know where it originated!