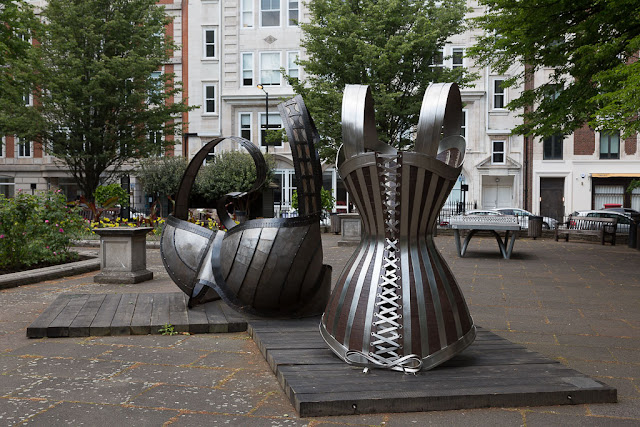 While on my long London walk on Monday, I came across these interesting sculptures in Golden Square -- "Big Bra" and "Corset" by Kalliopi Lemos. They're part of a series that aims to "deconstruct existing symbols and stereotypes" of femininity, and "express the need for women to fortify themselves with armaments of defense in order to cope with gender injustice." (According to the placard on display next to the sculptures.)

Golden Square is kind of a weird little place. Apparently it was originally the site of a plague pit, or mass grave for victims of the Bubonic Plague, as well as a grazing area for horses. One permanent resident of the park is this statue: 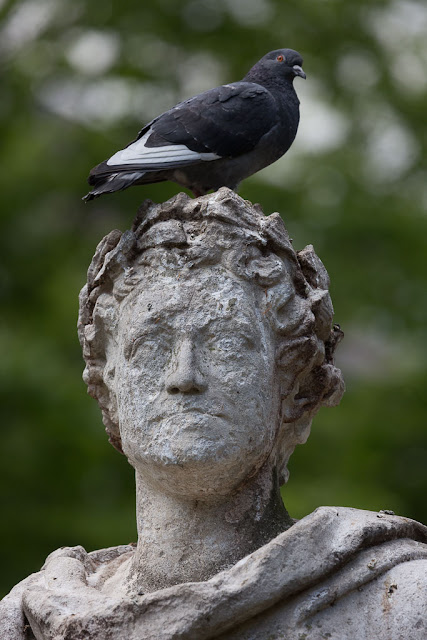 Supposedly it depicts either George II (the plinth says "Georgius II") or, according to the information board in the park, Charles II. At any rate, he looks a little...surprised. He's been standing there since 1753, and perhaps a couple of centuries of pigeon poo are partly responsible for damaging his complexion.

Yesterday was the 75th anniversary of VE Day, and there were socially distant events to mark the occasion, but I must admit I didn't pay much attention. There's too much drama now, and I've never been completely comfortable with celebrations of nationalism and military might. (Let me just point out, though, that Vera Lynn is STILL ALIVE! She's 103!)

Our upstairs neighbor, the Russian, got out his pressure washer yesterday and cleaned the steps and sidewalk in front of the house. He borrowed our hose (and water supply) to do it, and I thought it might take him an hour or two. But no -- he was out there for 7 1/2 hours! He cleaned not only the concrete but the rocks in the front garden, a row of wooden garden edging I didn't even know was there, his parking space and everything else even vaguely associated with our property. God only knows how much water he used. I suppose I should be appreciative, but I thought it was just weird. Do I care if there's dirt on the sidewalk? No, I do not. It's the sidewalk.

I told him to save the valerian growing along the steps, which he did, but I could see he hated me for it. I think if he had his way the front garden would contain only a few precisely trimmed shrubs that he could clip every weekend with tiny scissors.

I already mentioned that we arranged to have the council come on Monday to collect and discard our old patio furniture. We had a couple of items, though, that they refused to take -- a glass shower door that we removed from the bathroom when we had it painted, and a 13-foot-long plastic pipe that used to run up the side of the house. They said it was "construction waste" and they couldn't handle it for health & safety reasons. Well, yesterday, we called a private firm and they came and carried it away for the insane price of £60, and hopefully they didn't just drive it out to some woodland and dump it. (The council isn't charging much to remove the furniture, so overall I figure we're paying a fairly reasonable price to get rid of everything.)

Earlier this week I tried to order flowers for my mom for Mother's Day, which in America is this Sunday. I used an online network of florists, but they sent me an e-mail saying they were unable to deliver Sunday and to call them. So I did, and it turns out they actually couldn't deliver at all unless I provided another address, because they can't deliver to assisted living facilities due to coronavirus. Well, I didn't really have an alternative -- I mean, my mom lives in assisted living and she can't even have visitors at the moment, so I just cancelled the order. Flowers are a rip-off anyway. I'll call her tomorrow and tell her the whole story and she'll have a good laugh. 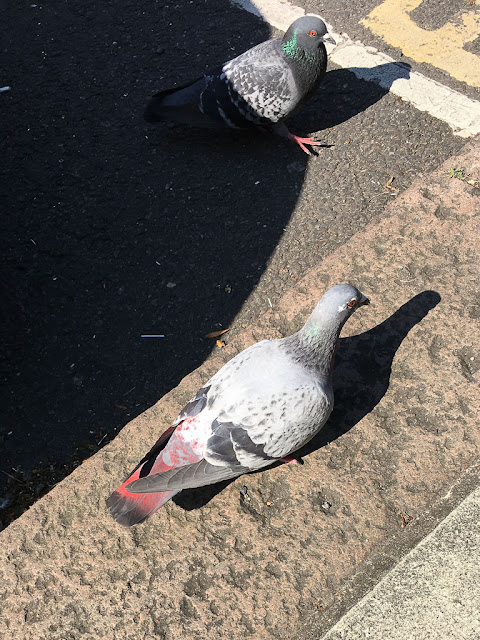 Speaking of pigeons, as we were above, have you ever seen a pigeon with a pink tail? I saw this one on the way home from the grocery store yesterday. Definitely unlike any other pigeon I've ever seen! Both of its legs were banded, so it must be privately owned or an object of study by someone. Pigeon owners have been known to dye their birds, but this wasn't garish pink -- more like a lovely salmon color -- and it doesn't seem dyed. There's a type of pink pigeon native to Mauritius, but it doesn't look like that either. Anyway, this is just an iPhone photo, but I hope I see it again sometime when I have my good camera.
Posted by Steve Reed at 6:54 AM