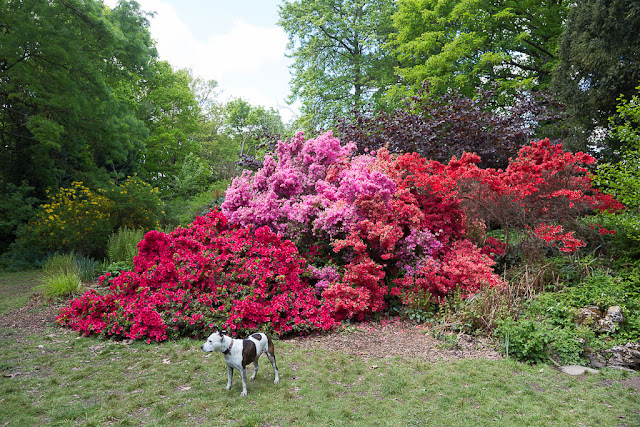 Olga and I went back to Hampstead Heath yesterday, just in time to catch the azaleas at Athlone House in peak bloom. We saw them back in 2017, but it's been hard to time our visits to catch them in subsequent years, so I'm glad we did this time.

Do you see the one in the background on the left -- the yellow one? That seems pretty unusual. I don't think yellow azaleas (or maybe it's a rhododendron) are all that common. 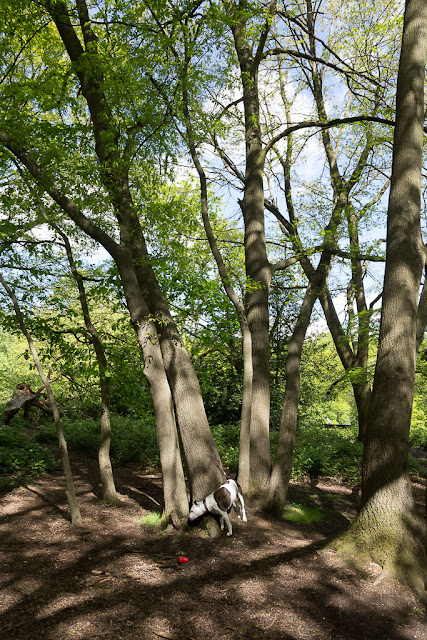 Anyway, we had a good long walk, with time for a back-scratch on a handy tree! 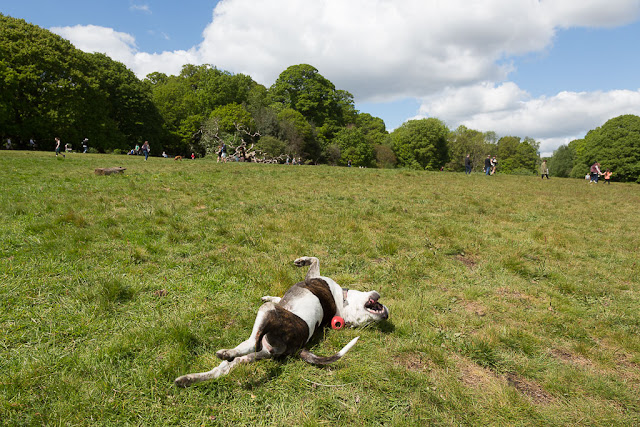 The Heath was about as crowded as I've ever seen it. I guess I shouldn't be surprised, on a sunny Saturday after a rainy week, but I was, given our current crisis. The only way to maintain social distancing was to walk off the paths. This picture of crazy Olga is actually meant to show all the people on the path in the background -- there are at least 40 people in the shot. We stuck to the grass.

To make things more complicated, it seemed like every visitor was in a family of about five, with everyone running figure-eights around each other -- so they took up a lot of space. My walk was like playing the old video game Asteroids, in which unthinking objects hurtle towards you and you have to evade them -- except, of course, in Asteroids you shoot them.

I heard one woman tell her kids, "The street where we left our car is this way." Which is more evidence that our lockdown appears to be slipping. Remember how we're not supposed to drive anywhere to exercise? Still, I can understand that parents must have been desperate for something to do outdoors with the kids.

Next weekend is the first May bank holiday, which always attracts tons of people to the Heath. So it's just as well we visited this weekend instead of next -- if we have good weather it's likely to be madness. (And actually it should have been this weekend -- it's usually the first Monday in May. This year the British government switched it to Friday to coincide with the 75th anniversary of VE Day.) 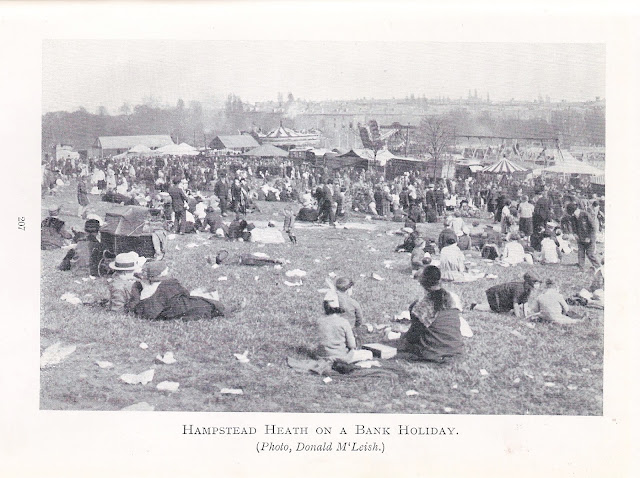 This photo is from my "London Shown to the Children" book, which is about 100 years old. It describes the Heath as normally "open, clean and deserted," but adds:

"On Bank Holidays Hampstead Heath is the Cockney's paradise, though its popularity has waned a little in recent years, since the revellers find it increasingly easy to go farther afield. But a great fair is still held here every Bank Holiday; marquees and merry-go-rounds are erected, swing-boats, and all manner of side-shows; and holiday-makers throng over the Heath, eating, and littering the helpless ground with paper bags and orange peel, and shouting, singing, swinging their wooden rattles, laughing, till the noise of their merry-making echoes for miles around." 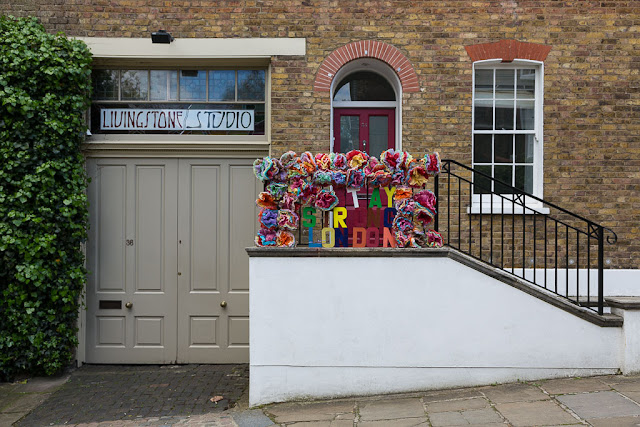 Anyway, Olga and I made our normal circuit of the Heath (skipping Parliament Hill, which I had a feeling might be crowded). On the way home, we passed this art studio in Hampstead, with a colorful "Stay Strong London" paper-flower display out front.

Last night we watched "Joker" with Joaquin Phoenix. I'm normally not a huge fan of comic-book movies, but since he won an Oscar for it, I figured we should give it a try -- and man, it is dark. It was really good and I hope I never see it again!
Posted by Steve Reed at 6:45 AM