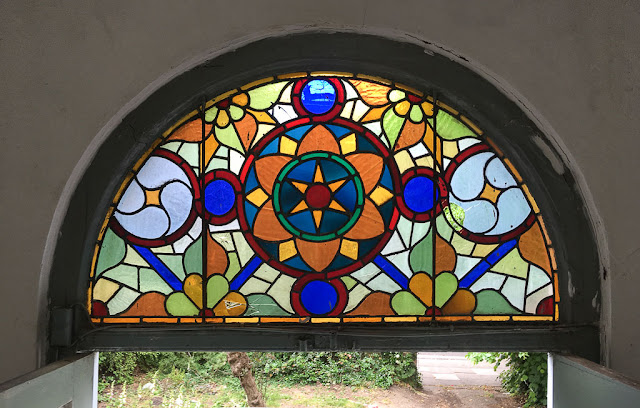 There's a house I pass on my walk to work -- a sort of Boo Radley-ish place, with peeling paint, a weedy garden and a generally unkempt air. Over the doorway to the front porch is a stained glass window, and for ages I have wondered what this window looks like. From the street, of course, you can't really tell -- it's like looking at a stained glass window in an unlit church from the outside. Everything looks mostly black.

Yesterday morning, knowing it was my last day of walking to work and thus my last opportunity to check it out, I walked right up onto the porch and took a picture of it. I tried not to be too surreptitious, because I didn't want to look creepy or suspicious, but I also tried to be as silent as possible. If Boo Radley ever knew I was there, hopefully he didn't mind. 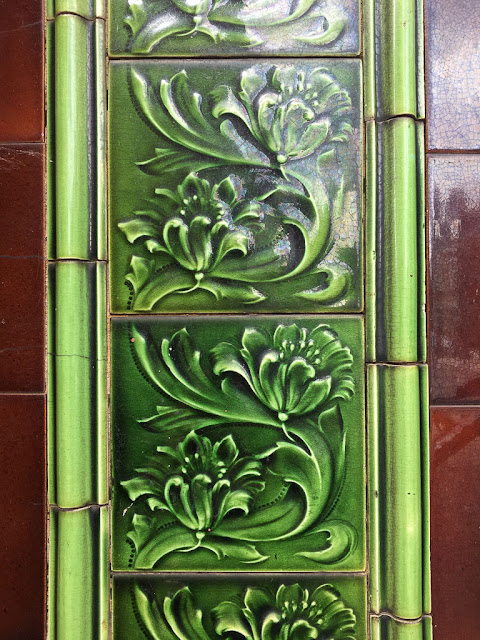 I also took a picture of some beautiful old tiles on the outside of a vacant restaurant. Like the building around the corner from us, this is another never-ending renovation. This place has been closed and under construction ever since we moved to West Hampstead in 2014. As far as I can tell, one older guy -- presumably the building owner -- is doing all the work. At least he hasn't demolished the tile.

I braved the grocery store the other day. Dave is amused by my shopping because I sometimes buy random stuff we've never tried before. I just like to experiment. I came home with a green, oblong melon on this most recent outing. "What kind is it?" Dave asked. "I have no idea," I said. (I've since come to believe it is a Santa Claus melon, known in Spanish by the somewhat unappetizing name of piel de sapo, or "toadskin." We haven't tried it yet.)

I also bought some Cornish sardines, packaged with a parsley sauce. Not like little canned sardines -- these were fresh and much bigger, more like a good-sized carrot. Anyway, Dave made them for dinner last night, and we're not a huge fans. They tasted OK, but they're bony little devils.

We watched the movie "Moffie," a South African flick about a young gay man conscripted into the military in the early 1980s. (As apparently all South African men were at the time.) It was a good movie, but fairly hair-raising in places.
Posted by Steve Reed at 7:29 AM