Teasels and a Muddy Snout 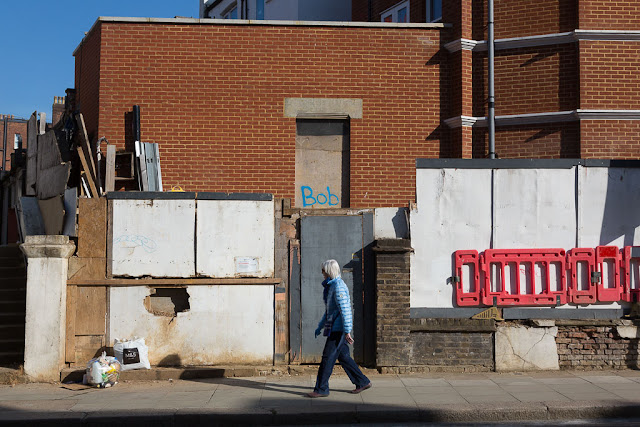 Apparently we're having the hottest April in 361 years -- our glorious recent weather has actually been warmer than Crete and Ibiza! It's also one of the driest Aprils on record. We've been watering in the garden almost every day. Fortunately I'm seeing forecasts that call for rain around the beginning of May, so that will be welcome.

Dave and I bought a new patio table to replace the sagging, rotting specimen out there now. The old one was here when we moved into the flat, so I sent a note to the landlords telling them we intend to discard it. They wrote back saying it isn't their table; apparently it was purchased by a former tenant. So we're in the clear to throw it out. The new one is smaller and round, and hopefully slightly more mobile so we can take it out to the lawn and bring it in over winter.

I've been debating whether to stain it, like I did our other outdoor furniture. I haven't decided.

In other news, Dave and I got our coronavirus stimulus payments from Uncle Sam. So that's a welcome development. (It will more than pay for the table!) I wasn't sure we'd even get one, living overseas, but since we're citizens and we file taxes I guess we qualify. Woo hoo!

As usual, yesterday involved more reading and walking the dog. Olga and I finished our cemetery walk just as it was closing at 4 p.m. I had no idea it closed so early these days -- apparently it's a coronavirus schedule. There must have been about 80 people at Fortune Green when we walked through, lounging on blankets, having ice cream on the benches, playing football. Little kids were riding bikes and scooters. I did my best to steer clear of everyone.

I also made a quick shopping trip for some essentials -- ice cream, peppercorns and white wine! 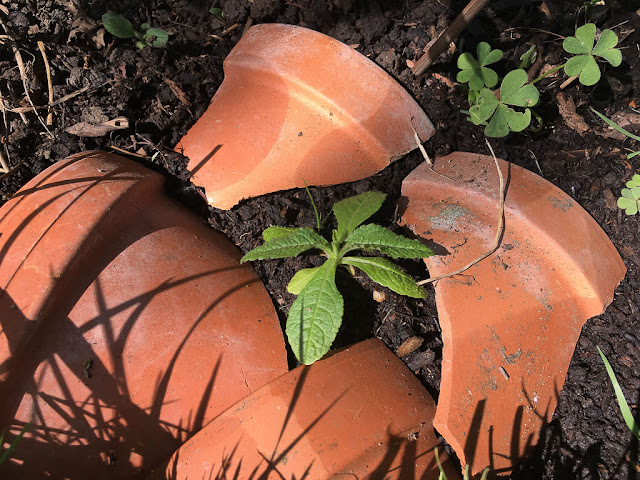 In the garden, I planted the teasel seedlings I rescued from last year's pods. We have seven of them, including three in one pot that somehow all got planted together. (The pottery shards guard against digging squirrels.) 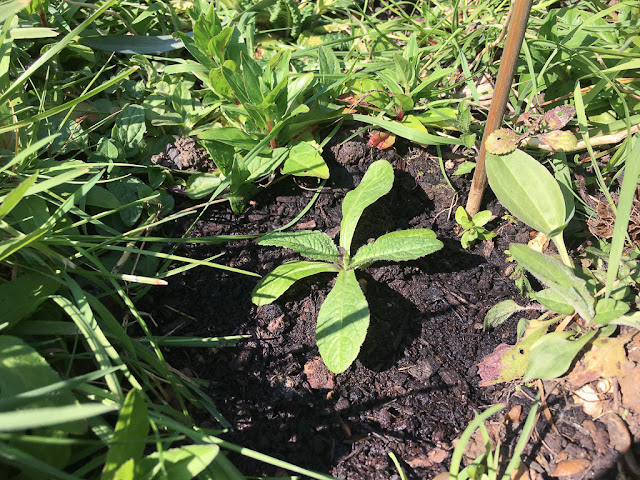 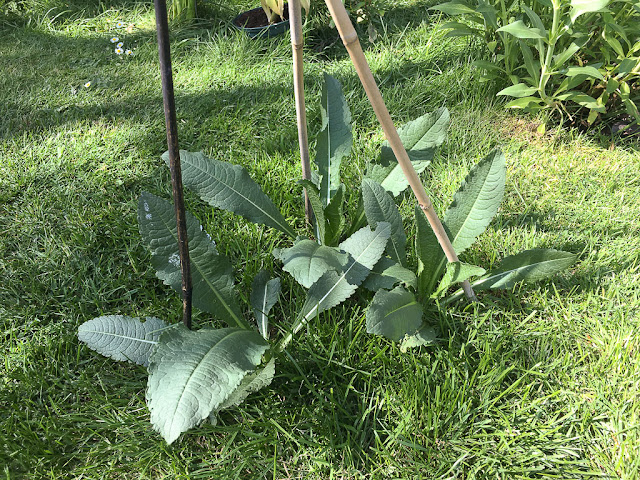 We also have these three teasels that grew up in the lawn all on their own. I'm going to let them mature, even though they're in kind of a funny place right in the middle of the grass. We have a few others that took root on their own in the flower beds. Goldfinches love teasels, and I like the flowers, but we're obviously going to have to monitor this situation or we may be taken over! (Sort of like the ragwort, which we allow to grow for the caterpillars, but that stuff reproduces like crazy so we have to keep it in check.) 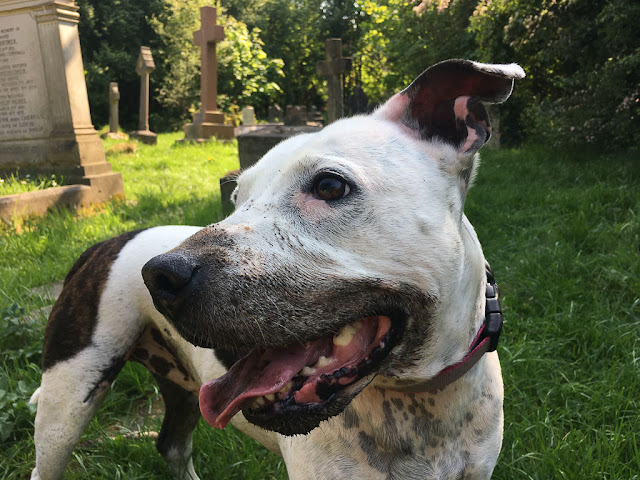 Here's Olga at the cemetery. She dropped her Kong in a deep mud puddle underneath a water spigot and blackened her snout trying to retrieve it! As usual, all the dirt vanished on its own by the time we got home. She really does seem to have Teflon fur.

(Top photo: This building around the corner has been under renovation all six years we've lived here. Here it is in 2014 -- looks better now, but what's taking so long?)
Posted by Steve Reed at 7:09 AM

Another great post Steve. I'm not blogging for a bit but still reading. You always seem to evoke memories for me. My Nan used to dye teasels and use them for decoration.
Way back in time when I lived at home our house backed on to the cemetery, we kids had great fun playing in there and hid behind the grave stones when the warden made his rounds. He used to walk the entire cemetery with a hand bell at the end of the day to warn people that he was closing up, such simple times. Ahhhhh. lol
Briony
x

Briony: Actually, that's how they closed the cemetery yesterday too -- by ringing a hand-bell! I had no idea what it meant. Someone had to tell me. LOL

I wonder if "Bob" in the first image is an instruction or a name.

That's that good old invasive teasel. But the flowers sure will be beautiful. That building though... Budgets? Permits? Those kinds of things drive me crazy. And I would imagine if the owners have been having problems getting it done for the past 6 years, the years after covid-19 are not going to be any better.

I wish you could patent Olga's self-cleaning abilities for use on children. Wouldn't that be amazing?

it's hot and dry here too. no April showers. though today is a bit cooler for which I am grateful.

Your the first person I've heard of who have gotten the stimulus money. I've been waiting but nothing yet. I was wondering about your weather. It seemed strange to me that you were having day after day of sunshine....in April.

We haven't gotten ours, and wonder if we ever will. We're both on social security, and allegedly it will be direct deposited to our accounts. My view is if the government can screw it up, they will.

Your plants are coming along wonderfully. Olga looks ever so happy with her dirty face. It's still a bit cool here. Our warm temps come late, almost to summer. Enjoy your day, hugs, Edna B.

So did you get the electronic version of the check or did you have to look at Trump's name on a paper version? :)

YP: Ha! I must admit "Bob" is what first caught my eye and prompted me to take the picture!

Mitchell: Yeah, tell me about it! I have no idea how building permits work in this country, but I am mystified by the extent and duration of this project. There's a similar building just south of the tube station, containing a closed restaurant. It's also been under renovation for at least six years. I think the older man who owns it is doing all the work himself!

Ms Moon: There is definitely a marketable technique here! She's a really good-smelling dog, too. She smells like toasty Fritos.

Ellen: Cool is good! You should have saved some of that fence work, maybe, for cooler weather.

Sharon: I wonder if they give it out according to when taxes were filed, or something like that? I have no idea.

Allison: Ours came by direct deposit as well.

Jenny-O: We got it electronically, no Trump signature required. Olga IS a magical dog.

Oh the do-it-yourselfers. We have two restaurants below. They are both currently renovating befire putting in their new terrace structures (a city requirement and they WERE on a deadline). One restaurant hired a professional team and did all external demolition and refacing in two days. They're now waiting on the crew that will install the new terrace. The other, the chef/owner/renovator (and all-round jerk) is doing most of the work himself. We just finished week 2 of demolition (and he's at it 6 days a week). I think he only hires out to meet license requirements. So, we get to listen to slow hammering at least 8 hours a day.

I love imagining you and Dave and Olga in your English garden.