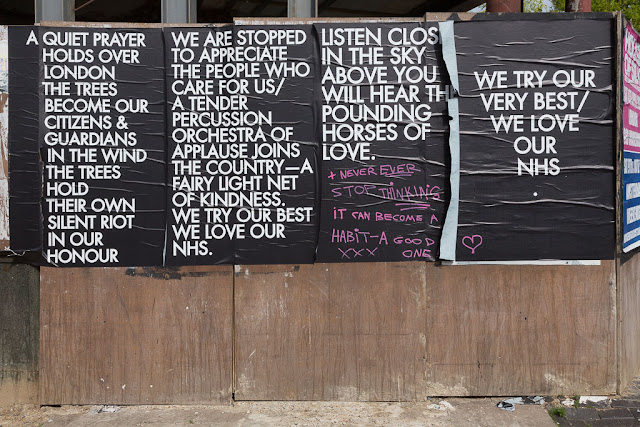 Given that we finally had some much-needed rain, I spent the entire day indoors yesterday. On the couch. With the dog. Which means I have no news, other than another collection of backlogged iPhone photos!

First, someone added to the NHS poster-poem on Finchley Road. I think the addition is actually a subtraction. 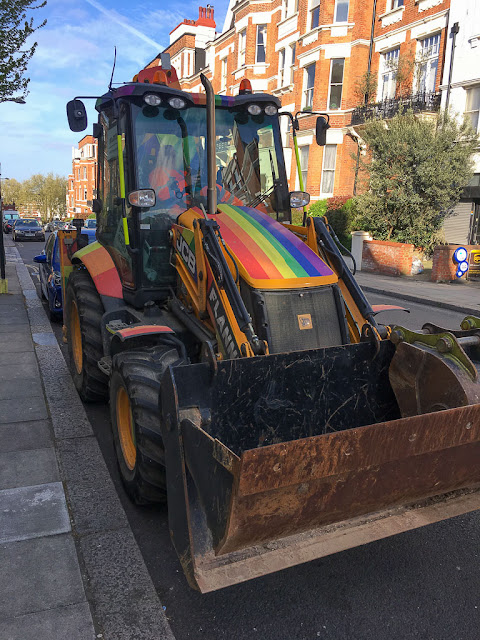 At first I thought this was a big gay bulldozer, festooned with rainbows. But then I realized it's probably a tribute to the NHS. (Rainbows have become the symbol of gratitude in the coronavirus crisis -- as in, there's a rainbow after a storm.) 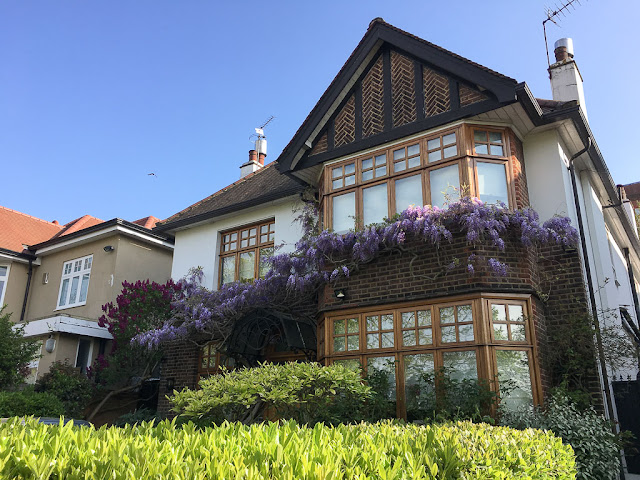 I'm always impressed with this wisteria, which I've photographed in years past. It was looking good again as usual. 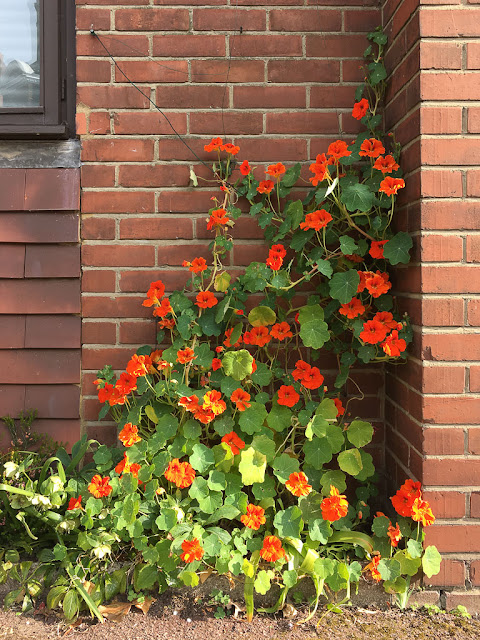 And look at this nasturtium, blooming like crazy so early in the season! 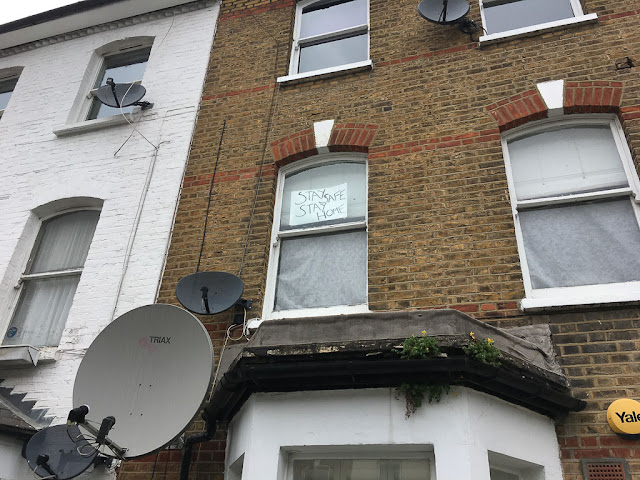 I've been seeing a lot of signs reminding people to take our lockdown seriously. (In case you can't read it, this one says "Stay safe, stay home.") 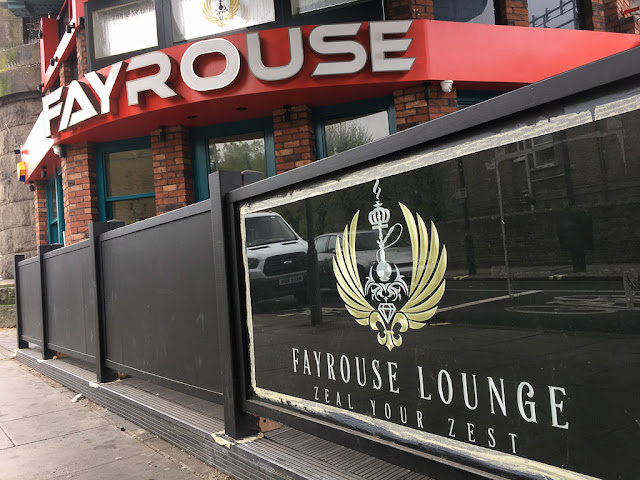 I wonder what it means to "zeal your zest"? This place didn't endear itself to neighbors when it was allegedly the site of a large gathering the night before our lockdown was announced. People were too busy "zealing their zests" to be concerned, I guess. 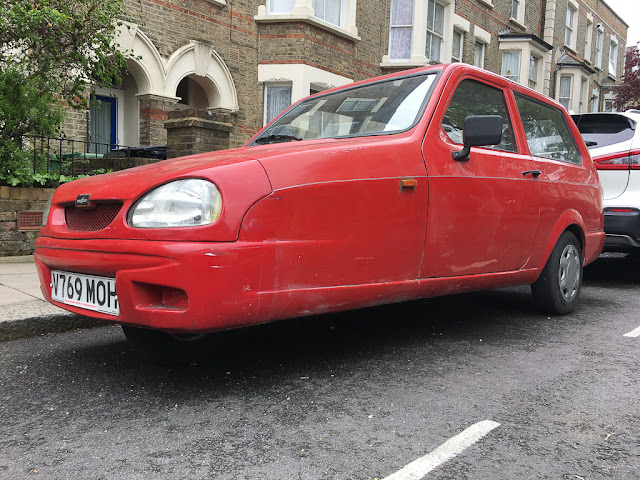 I don't know if you can tell, but this little car has three wheels! I don't remember seeing anything like it before. It's called a Reliant Robin. Apparently it's made of fiberglass. 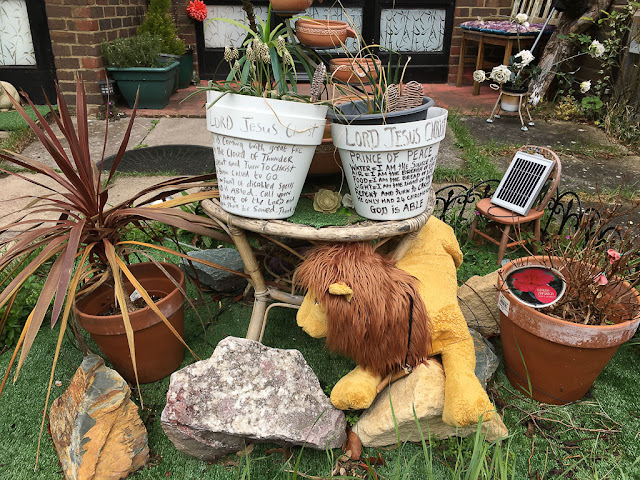 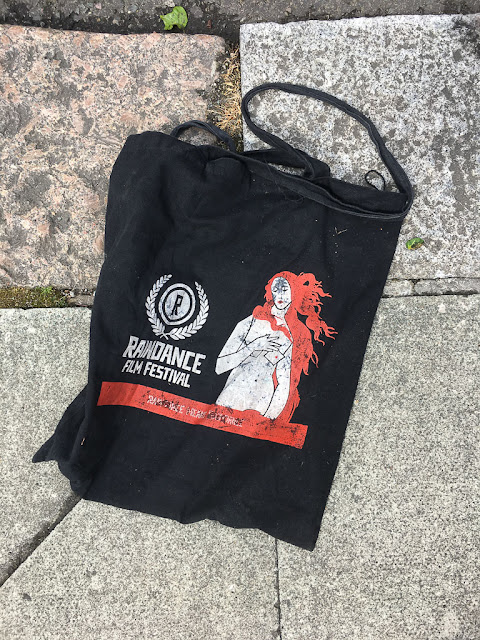 I've heard of Sundance, but Raindance is a new one on me. Apparently it's kind of a big deal. Not enough to make someone want to keep this tote bag, though. 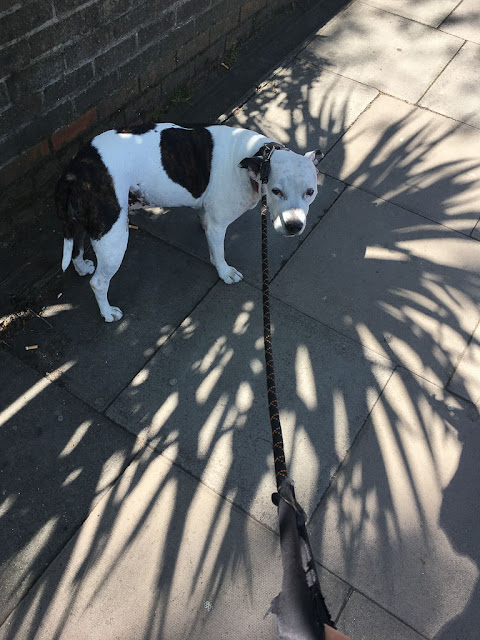 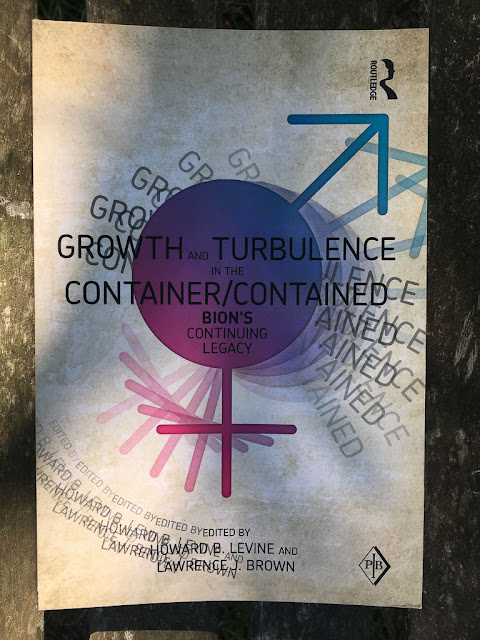 And finally, a book I found abandoned on a bench in the cemetery. "The book is composed of five sections addressing key aspects of the most cited author in psychoanalytic literature after Freud," according to the Wiley Online Library. Kind of intense for light cemetery reading, don't you think? (I left it there.)
Posted by Steve Reed at 6:58 AM

Interesting collection of photographs, as always. Thank you. My favourite is the rainbow bulldozer. It may indeed be for the NHS, but anything with a gay rainbow on it lifts my heart.

I have been out listening for "the pounding horses of love" but they must be back in the stables zealing their zests. I guess that all that pounding makes you tired after a while. It is a hard life being a stallion.

Also... how about a children's story called "Ray the Gay Bulldozer"?...Actually, it's not a bulldozer, it's a JCB digger but that doesn't sound so good.

My Brother-in-law had one of those Robin Reliant back in the late 60's and a family of Two adults and Two kids used to pack into it. lol It served them well and sounded like a motorbike.
Those old cars were wonderful, we had a Morris Minor and it was brilliant, so sturdy.
Briony
x

I have never seen or heard of that Reliant car. What a truly unusual find. Lots of great observations today. Glad you got some rain. You went an unusually long time without any.

You have such a great eye and a wonderful sensibility of what is interesting (and beautiful) to share. Oh, I want that house... simply because of the wisteria!

lovely tour of your neighborhood. The wisteria!

Nice collection of iPhone photos. Our wisteria is just getting flower buds... soon we'll have hanging flowers. Thank you for reminding me of the coming beauty.

As always, your iPhone photos make me happy. That Christ-informed little display reminds me very much of something I'd see in Lloyd. And I love how the NHS is so respected. It's absolutely unbelievable that here in the USA we still haven't figured out how to provide health care for all.
And say what you will about that bulldozer- I am going to think that it's both a tribute to the NHS AND a big gay bulldozer.

Bion? never heard of him. I would have thought it would be Jung. and I wonder if they prune that wisteria back every year after it blooms to keep it manageable because it will take over. and I guess the patrons were having one last zeal before there was no more zest.

You find some interesting things on your walks and then your mind starts twirling about what is behind the photo.

Top Gun, a car show that used to be on BBC America, with a British cast, used to demonize the three wheeled cars. They would take them out and drive so that the would roll over. They hated caravans as well.

I tried to read the flower pots and was intrigued by the mention of 24 chromosomes on the right pot, and something about being disabled on the left... "GOD IS ABLE."
I wonder what that's all about.

Can you go back and knock on the door and ask for more info?
Oh--no--that wouldn't be social distancing.

My savior is so powerful that I don't have to go around bragging about it, making signs for people to read, because my savior is so awesome that everybody already knows.

To be clear, I'm talking about a vodka martini at cocktail hour, otherwise known as the Five O'Clock Angel.

I just love your random photos. They are always so interesting. I'd have left that book on the bench too. Stay safe and enjoy your day, hugs, Edna B.

Gay heavy equipment made my day- and the Jesus pots. Insanity during the plague!IF we all get out of this and IF the orange turd is not reelected, I think it would be great to put a little pandemic museum together. Those pots would be nice to have. Good that you left the tote behind, it was likely chock full of little covids.

Always thought provoking photos and comments. I think my zeal for zest is zonked.

Ah, the nasturtium plant. Rambling where it does; unruly, untidy but brilliantly coloured.
Making a bright spot in the day of any passer-by who is outward looking.
Alphie

David: I agree! I always get a kick out of a gay rainbow.

YP: Bulldozer, digger -- whatever! Any piece of heavy earth-moving equipment is a bulldozer, in my book. Unless it's a steam shovel, and I don't think those even exist anymore.

Briony: Ha! I can just hear the sound that engine must make!

Sharon: I don't think I've ever seen one, either. There must not be many still around.

Mitchell: It's my favorite house on that street, hands down!

37P: Isn't it great? Especially paired with the purple lilac on the left.

Padre: She can get quite testy when I stop to take pictures. She'll bark at me when she's really annoyed.

Robin: I'm surprised yours is behind ours. Seems like we'd be on roughly the same timetable!

Ms Moon: The British LOVE their NHS. It's really heartening to see. I think they know they have it good compared to many other countries. The NHS has its failings but it's definitely the best system for the most people.

Ellen: I know! I've never even heard of Bion. They probably do some minor pruning just to keep down the new growth -- it's basically looked the same the whole time we've lived here.

Allison: They look like the kind of cars that probably invited ridicule from gearheads.

Fresca: I tried to read them too, but they are quite perplexing.

Vivian: I'd go for a gin martini. So in the big picture we're of the same faith. We just have minor denominational differences. :)

Edna: Thanks! I'm glad no one said they'd have wanted it, when I could have picked it up and mailed it to them.

LindaSue: I thought about picking up that bag, but we have so many of those canvas shopping totes it's a little crazy.

Penelope: Ha! "Zonk your Zeal for your Zest" should be their next slogan.

Alphie: I love a good nasturtium. We've had variable luck with them here.