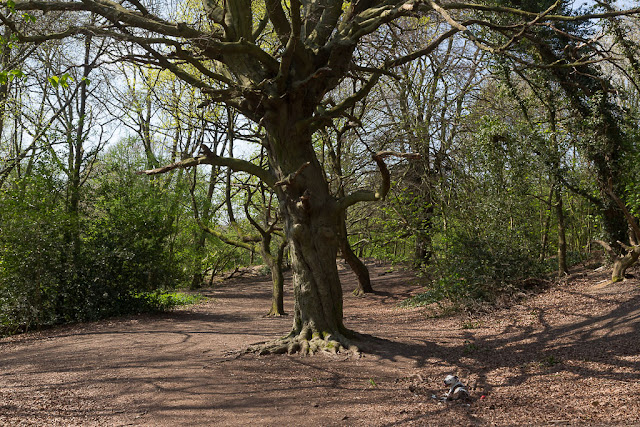 I took Olga over to Hampstead Heath yesterday, and we spent a couple of hours walking in the woods.

Is this against the government's rules, during our coronavirus lockdown? I don't think so. We're allowed one period of outdoor exercise per day, to include walking. There's no prescribed time limit, but we are told to stay local -- we're not supposed to drive or take public transport. So as far as I can tell, I violated nothing, but I also have a nagging feeling it was probably a longer walk than the experts have in mind. Which is why I'm making it an infrequent outing.

It's hard to know. Our rules are quite open to interpretation.

I wanted to go yesterday, before Easter weekend, because I think it's possible the Heath will be more crowded beginning today. Yesterday we saw people, but it was never hard to maintain distance and a lot of the time Olga and I had the landscape to ourselves. 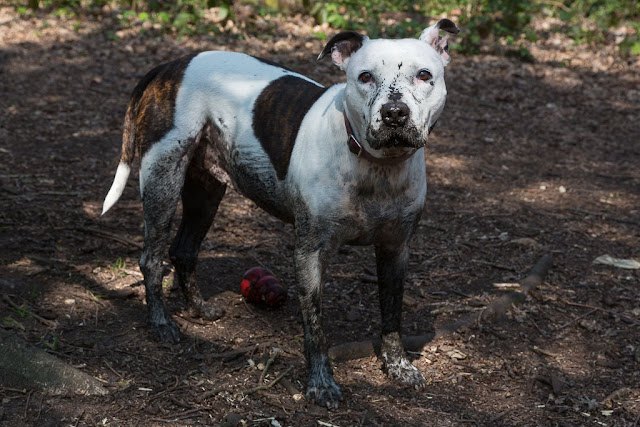 Olga, of course, had a terrific time and didn't worry at all about rules and regulations. Or staying clean. 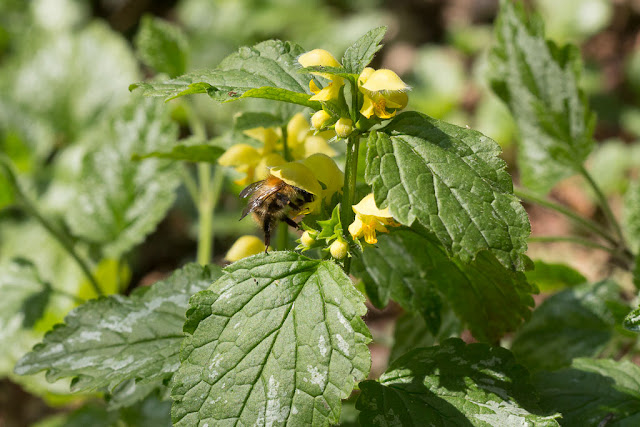 The bees were on the flowers of the yellow archangel... 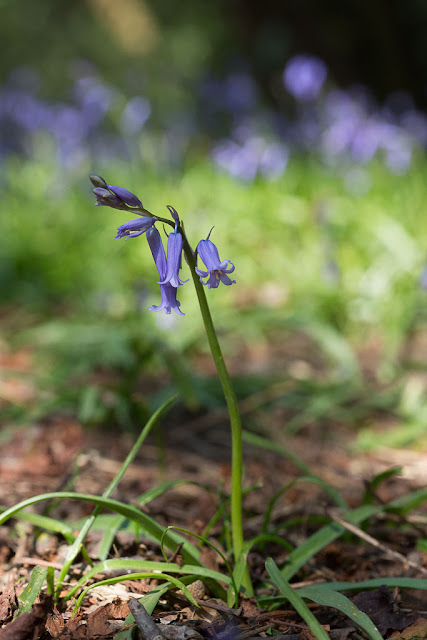 ...and the bluebells were beginning to bloom in the woods. 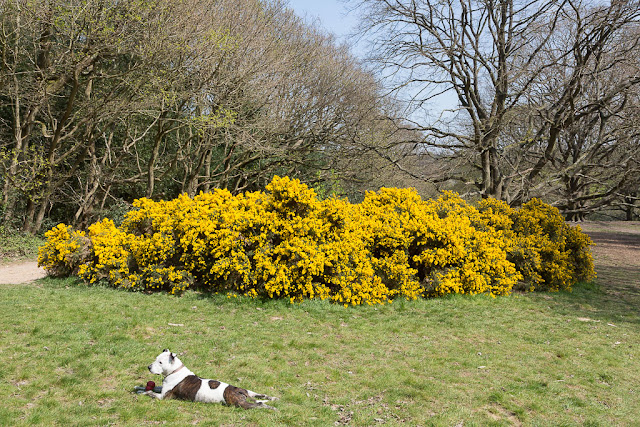 The gorse was an explosion of yellow. 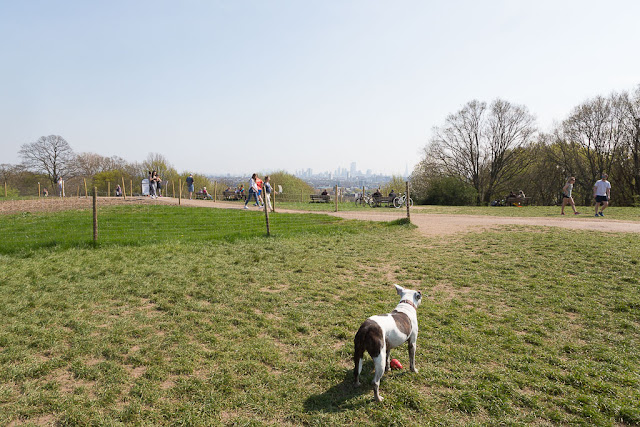 We walked up Parliament Hill and saw a few people lingering on benches, which the police have expressly asked us not to do. Soon after I took this photo, a police car passed me going up the hill and I heard an officer making announcements through his incomprehensible loudspeaker, presumably moving people along.

Olga and I got no closer than this. Even though there are almost 20 people in this photo, that's far fewer than you'd normally see on a sunny day at Parliament Hill. It was weird looking at the city skyline and thinking that a lot of those high-rises in the financial district are probably empty, with everyone working from home or, worse, furloughed. 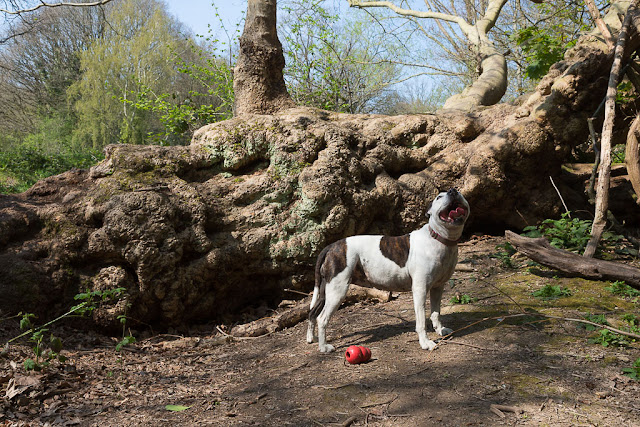 Nonetheless, it felt so good to take a long walk once again. I know it made Olga's day.
Posted by Steve Reed at 7:28 AM

Thanks for these photos. It certainly looks like Olga enjoyed herself.

A lovely walk in lovely weather - undertaken responsibly. I love the picture of muddy Olga but I also imagined doggie bathtime back at Reed Mansion. Did you pick up any shards of pottery?

It's not easy to follow the rules when the rules aren't made clear. Olga obviously needs to learn some rules about mud -- but she's so happy!

Great photos. I especially loved the first one - the spooky looking tree with arms outstretched over the path. Loved the play of light and shadows. Well done.

Olga made my day. The muddy-to-the-tip-of-her-nose photo just cracked me up. I was imagining from her look at you that she was saying, "What? I'm having a good time." The girl does know how to enjoy herself.

Police proclaiming from vehicle loudspeakers has a creepy sort of futuristic feel, doesn't it?

However you may interpret the regulations, you didn't harm a soul nor did you risk anything. At least that is how it appears to me.
That tree is a sentient being without doubt.

I love the flowers but that photo of Olga covered in happiness is just precious! Stay safe and have a wonderful day, hugs, Edna B.

A beautiful day for a walk there. I'm glad you and Olga got out to the Heath.

Olga does look very happy and very muddy. She probably helps with the social distancing:)

The photos are lovely, gives me hope that we'll get a spring one day.

Information is at times conflicting. One source says one thing and another source says something diffeent.

I don't think it matters how long you were out. you walked and were mostly alone the whole time. how can anyone complain about that. that last picture is a great shot of Olga.

It seems like you did the right thing to me...keeping distance and yet getting out for outdoor time. And, Olga looks so pleased, it might be worth breaking the *rules* a tad on the length of time you were out.
Dee

Well that was a good long walk for you and Olga. And, you got some great shots of Olga. I can't believe how muddy she is in that one shot. It looks like it was a good day for a long walk.

I guess it is youths' belief that they are immortal that causes them to flout the rules of society in these scary times. I see groups in our town too, walking together closely and wearing no masks. It makes me both angry and sad when I see them.

I always heard it is easier to beg for forgiveness than it is to ask for permission. The photos are grand.

Oh That Muddy Look - Such Joy

E: It definitely made her day!

YP: Oh yes, there was definitely bath time. No pottery yesterday. I'm trying to limit my pottery uptake these days, having already made my stepping stones. :)

Mitchell: I don't even try to keep her clean. She always gets a bath when we get home!

David: Thanks! Hampstead Heath is full of amazing-looking old trees.

Mary: We call her "100-percent dog," because whatever she does, she is ALL IN.

Marty: It IS rather Orwellian, but in this case I think it had to be done.

Ms Moon: I suppose there is minor risk every time we step out the front door. But yeah, if I don't get close to anyone and don't touch any surfaces, I don't see how I could become infected.

Edna: "Covered in happiness" -- I like that wording! LOL

Robin: Olga is glad too!

Lilycedar: Ha! And the fact that she's a staffy makes people wary too. Even though she is completely harmless.

Red: In this case it's not so much conflicting information as ABSENT information. The rules are very non-specific. I think the government is trying to balance public safety and personal freedoms.

Ellen: Yeah, that's how I feel. The duration doesn't matter. It's what we do with our time out and about.

Dee: She does seem worth it, doesn't she?!

Sharon: It was indeed! The weather has been perfect the past week or so. In fact, we could use some rain.

Catalyst: I've read that the demographic group most likely to ignore social distancing is young men from 16 to 34, or thereabouts. I think you're right -- it's about invincibility.

Penelope: I can always play the "ignorant American," too. LOL

I'm pretty sure a long walk is allowed, as long as you keep your distance. I love your photos of Olga. I don't think I've ever seen a dog with more personality.

Just looking at these pictures made me breathe more easily. Thanks!