Olga Gets Her Wish 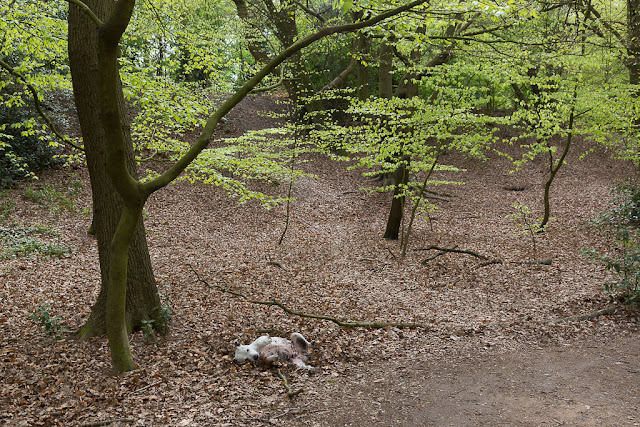 I allowed Olga to direct me toward the Heath yesterday, abandoning our routine walks through the neighborhood cemetery in favor of a longer and more naturalistic ramble. Doesn't she look thrilled, rolling in those dry leaves? And she was, believe me.

We went in the morning because rain (blessed rain!) was predicted for the afternoon. 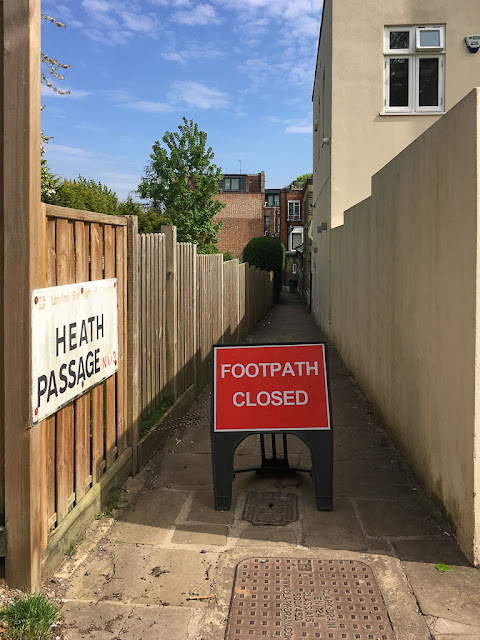 We usually walk this footpath between some houses to get from the West Heath to Sandy Heath. But as you can see, it's been closed -- presumably because it's so narrow that social distancing is impossible. (For the record, I've never passed another human being on this path, but I guess it could happen.)

There's a similar but much busier path we must navigate on our walks to the cemetery -- not quite so narrow -- and it's still open. Go figure. All these decisions seem very arbitrary.

Anyway, it wasn't a problem to skip the path and walk a little residential street to get where we were going... 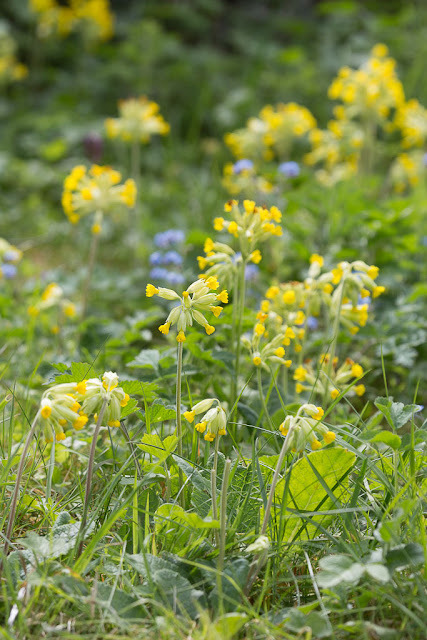 ...and in a way it was better, because we passed this field of blooming cowslip and forget-me-nots. 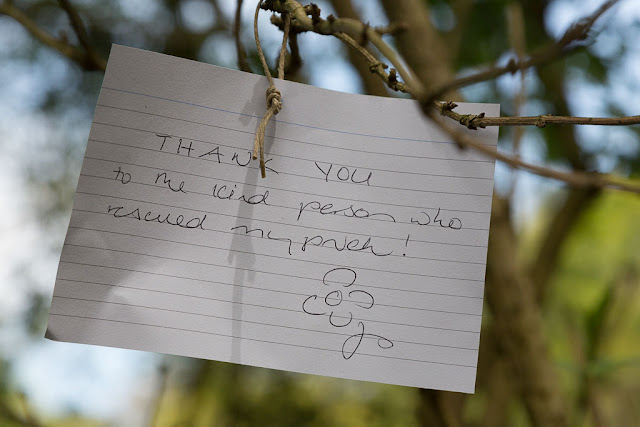 I found this note on a bush on Sandy Heath. What got rescued? A pouch? A pooch? 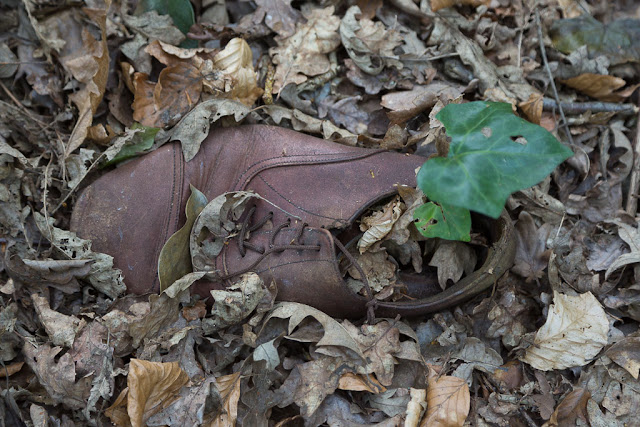 A woodland shoe planter. How does someone lose one shoe on Hampstead Heath? Did they hop home? 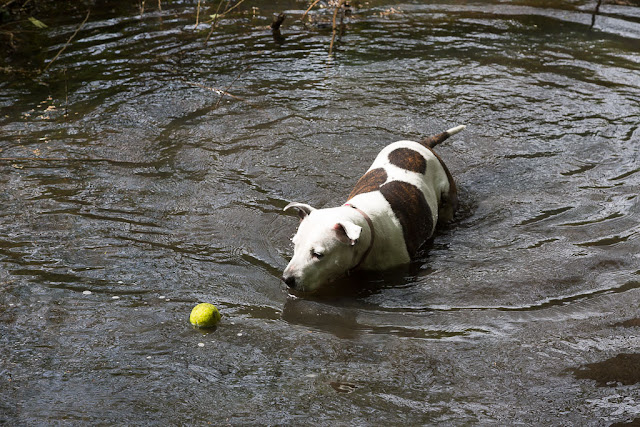 Olga found a good spot for a dip with her tennis ball... 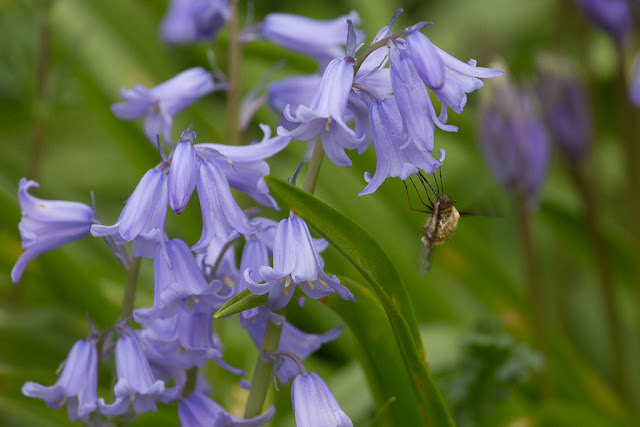 ...and I found this weird-looking long-legged bee buzzing around some bluebells. I later realized it's not a bee at all but a bee fly. If I've ever seen one of these before I never took the time to figure out what it was. Interesting! 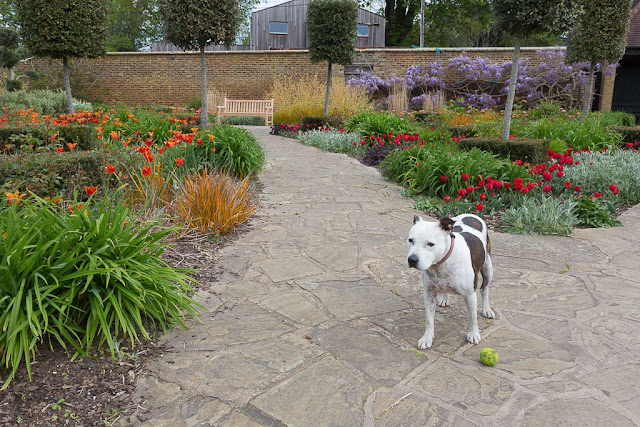 As usual, on the way home we cut through Golders Hill Park, so Olga could detour through the stumpery and salivate over the squirrels. Fortunately for them, they're behind a fence and Olga wears her lead in the park. (Except for photo opportunities like the one above.)

Otherwise, yesterday was a sort of numb day. I finished my few library projects, to the extent that I could, so my slate is now clear and I can go on furlough (as of Monday) in good conscience. More time to read! As for rain, we got a light drizzle in the afternoon, and maybe some more overnight, but I don't think it was much.
Posted by Steve Reed at 6:53 AM

A lovely set of very different ( to each other) photos. We had a lot of rain in the night and still wet now. (8.50am)Hoping that my empty water butts will be recharged!

Hope the furlough is pleasant enough. Olga will keep you busy. (I love that dog!) That bee fly is new to me. I, too, think I've ever seen one, I didn't know it. GREAT photo(s)!

Heath Passage? I thought that was connected with the daily evacuations of former Tory Prime Minister Edward Heath. As for the note on the tree, isn't the last word "prick"? And as for the Bee Fly, I have heard of an A Fly and of course to D Fly means to rid your house of flies... but I never heard of a Bee Fly. Is it what results when bumble bees mate with bluebottles?

Olga will be happy for your undivided attention through the furlough. May it be very, very temporary.

Olga knew what y'all needed. Bless her sweet rambling heart. Has she ever seen a chicken? I wonder what she'd do if you brought her to Lloyd and let her loose in my back yard. Between the chickens, the squirrels and my cats, she'd be in heaven.
I wonder if that shoe has a mate hidden under the leaves somewhere. Whoever wrote that note has a very lighthearted sort of penmanship. Too bad it's not quite legible. But it is a nice gesture.

she does look like a happy dog. and so many pretty flowers.

Looks like a nice day for a walk at the Heath. Olga looks happy out there.

Walks with Olga. Your next photo book! She is a spectacular subject.

Olga looks like she enjoys life very much. That last photo of that garden, I am green with envy. I've always wondered how people lose one shoe. It makes no sense.

Olga knows what's best to do! Olga doesn't have any covid -19 restrictions so she thinks she can go anywhere.

Ah, the pink belly roll. If that's not pure joy, I don't know what is. We met neighbors for a distanced BYO (drink and lawn chairs) cocktail hour ten feet apart on a big grassy patch and Mamie provided the floor show in the middle, feet in the air, rolling for all she was worth.

Olga looks like she's very happy to get her way for this walk.

Beautiful pictures! As a retired librarian, I am jealous of your position in London. I guess I'll just have to live vicariously through your experiences. I will probably never get to go back to London, my most favorite place to visit. My hubby and I are not in good health now, so we are done flying--it is just too difficult with all of the paraphernalia we would need to bring along.

Good for you and even better for Olga. Taking her to the Heath, that is. She does, indeed, look ecstatic.

Laser beams of joy are radiating from Olga as she rolls in the leaves. Happy dogs are so uplifting!

Hee hee! Olga is like a model - a different pose in each photo! I think the note on the branch says "pouch", despite YP's interpretation :)

Oh my She is a happy girl! FINALLY trainer her human! The forest shoe is such an interesting photo, I love it. Olga in the water, too!! great walk!

The shoe planter reminds me of the one in "WALL-E" one of my favorite movies. Have you seen it?
700 years in the future, after Earth has been buried in garbage, one day a green shoot appears--the first organic life in centuries. It gets transported (into outer space) in an old boot.

I googled "how does one shoe get lost"--turns out this is A Question for the Ages--it even has its own Wikipedia page!!!
https://en.wikipedia.org/wiki/Abandoned_footwear

Olga looked quite pleased with herself in that last photo of her. She had a really super outing. I love how she brings a toy with her and hangs on to it. I've never seen a bee fly, let alone even heard of one. They look rather interesting. As long as they don't land on me. You have a wonderful evening, hugs, Edna B.

It does seem like there'll be a lot of "numb" days ahead. Sigh. I love the pictures of dear Olga. I still can't believe I didn't get to meet her when I was there last fall. That now seems like another lifetime!

Frances: Well, maybe we had more than I thought. It's hard to tell!

Mitchell: The funny thing is, now that I've seen that bee fly and know what it is, I've seen three more! They're everywere!

Ms Moon: Yeah, the note was nice, and I'm sure whoever was intended to read it will understand it. I shudder to think what would happen if Olga came face-to-face with a chicken. I don't think it would be good for the chicken.

Robin: Yeah, the Heath may be her favorite place.

37P: It would make a fun book for me, but I'm not sure anyone else would want it! LOL

Lilycedar: The gardeners at Golders Hill do a great job.

Red: Wouldn't it be nice to be a dog, completely ignorant of all this coronavirus stuff?!

Marty: Dogs know when they're on display!

Sharon: Definitely a happy day for her.

BethB: Well, never say never, but at least you can visit virtually through my (and other) blogs. Glad to have you stop by!

Catalyst: Good for both of us, it's true.

Allison: She definitely elevates my mood during these trying times!

Jenny-O: That's my guess too, but it really IS a guess.

Linda Sue: It was an excellent outing!

Fresca: I LOVED Wall-E when I saw it in the theaters years ago. I don't think I've seen it since but I should watch it again. LOVE that there's a Wiki about single missing shoes!

Edna: I don't think the bee fly stings, if that helps. It's just a big furry fly.

Elizabeth: It DOES seem incredibly long ago, doesn't it? And who ever thought we'd be in this position now?!