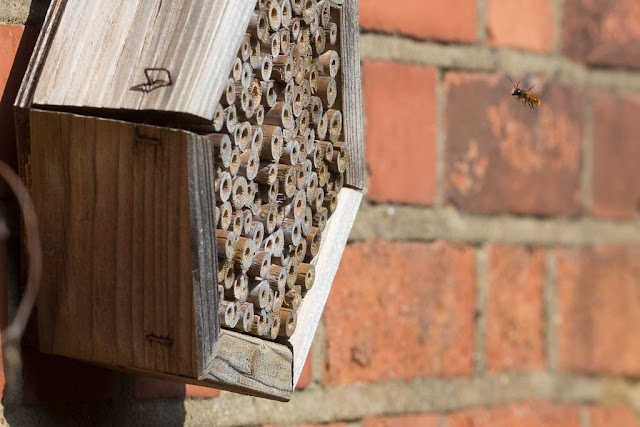 Several years ago, not long after we moved into this flat in 2014, Dave got online and ordered some hexagonal "insect houses" for the garden. They're wooden frames, one stuffed with drilled bits of wood, one with bamboo and one with pine cones.

We hung them on the side wall of the house, in a sunny spot, as the directions suggested. And eventually we made fun of them because they never seemed to attract any bugs.

But this year we've noticed a little bee (at least one) going in and out of the holes in two of the nests. Can you see it flying in the photo above, at upper right? Apparently these insects nest individually in holes like that, and are known as "solitary bees" because they don't live in hives or colonies. They practice social distancing!

So that's kind of cool. I'm glad our insect houses are paying off. 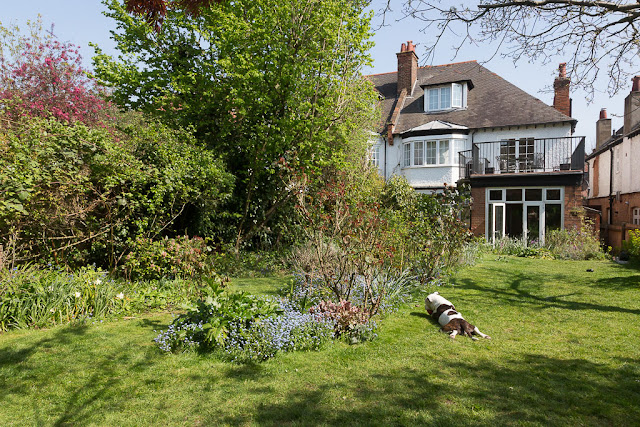 We're continuing to have amazing weather. It's supposed to be 74º F today. My only complaint is that we've had no rain to speak of for a couple of weeks. We were practically underwater in February and early March and now we're bone dry. But I see showers in the forecast for this evening, so here's hoping.

I spent almost all day yesterday sitting on our garden bench, reading. I've started a gigantic book, Garth Risk Hallberg's "City on Fire," which is 900-something pages. I read 100 pages yesterday and I'm liking it so far. I figure if I can get through that much each day I'll be done in a little more than a week -- and even if it takes two weeks, it's not like I don't have the time. I suppose I shouldn't look at it as a task, but any really big book feels that way to me.

I walked Olga in the afternoon. In the cemetery we found a plastic bag hanging from one of the water faucets, full of water, and I thought that was a pretty clever way to give water to a dog. I took it down so Olga could drink from it, and then put it back, and then spent the rest of the walk obsessing about how probably every other person who used that faucet touched that bag and it was the perfect coronavirus vector. Argh! (Of course the handles of the faucets are too, I suppose.)

I ran into a co-worker and we had a socially-distant chat. I'd seen her husband out and about the day before, and I saw another co-worker riding his bike a few days ago. It feels special to see a familiar face (other than Dave). It's something I didn't even realize I was missing. 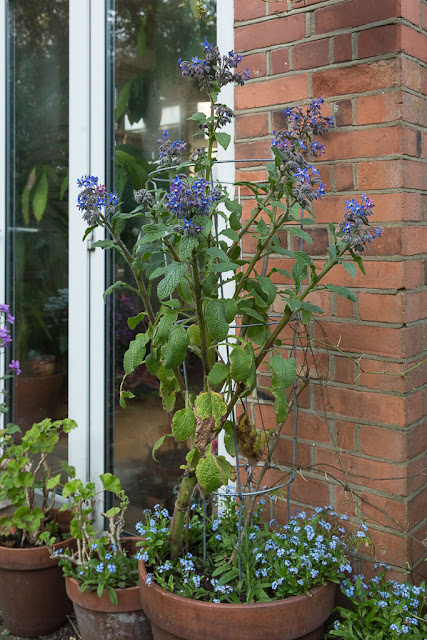 As you can see, our borage plant -- which grew on its own in this pot with our passionflower vine and some self-seeded forget-me-nots -- is going gangbusters. It's four feet tall, not including the pot. Vigorous! The vine is leafing out, too, so it seems they'll be able to live together through the season.

(I was going to use the verb "cohabitate," but Google is telling me that's not a word. The online dictionary seems to prefer "cohabit," as in "the plants will cohabit through the season." Have I been wrong about that all these years?!)
Posted by Steve Reed at 6:59 AM

NIce to see the garden from a different angle.....looks lovely. The house is very attractive too. How much of it is yours?

cohabitate - to live or exist together or in company

I've never really understood the difference between cohabit and cohabitate. I used cohabit, but they ARE both words, syonyms, and cohabitate is said to be a verb form of the verb cohabit (which I've never been able to make sense of). I love the idea of the insect boxes. The bee photo is wonderful (thanks for pointing out the bee). I'm allergic to bee stings, but do appreciate their importance. (Although I probably wouldn't install a bee box in my own backyard.)

Frances: Just the downstairs. The upper two floors belong to our neighbors, who in blogland are known as "The Russians."

YP: The full Merriam-Webster definition is "to live or exist together or in company : COHABIT." Which I think means cohabit is the preferred word? (The definition for "cohabit," in contrast, doesn't mention "cohabitate.")

Mitchell: I don't really understand the difference either, if there is one. I don't think solitary bees sting, but don't take my word for it!

I love the bee photo. Glad he has a little home to live in! I did some gardening yesterday, though it has been on my to do list for two weeks. I cut back the buddleia to allow for new growth and pulled up weeds from around the bases of the irises so the sun could get in there. I have a very pretty but annoying weed-with lovely blue flowers and very hairy prickly leaves. I was going to pull some up last week but then I noticed a little black bee happily feeding from them. So I have left quite a few. The bee is my excuse anyway!

If you cohabitate you are in the same habitat but if you cohabit you are living together. Not quite the same thing. For example - the grizzly bears don't bed down with the wolves even though they occupy the same landscape. Obviously the wolves do cohabit as wolves like to stick together...unless of course they are lone wolves!
(Courtesy of The Yorkshire Pudding Grammar Bible)

If you think about it, "cohabitate" almost sounds like a made-up fancy version of cohabit. Maybe something that Jed on The Beverly Hillbillies would say.
That's just my ear though.

Bee houses have become the in thing. We have bee houses in most of our parks but I'm not sure how much they ar used.

Funny - in your reply to Mitchel, you said you referred to the downstairs neighbors as "The Russians." That's what we've always called our upstairs neighbors here in Florida, even though we know their names. A little xenophobia here?

And had to check it out: My Word10 has no problem with the spelling of either word, but the thesaurus portion only produces synonyms for "cohabit", one of which I was delighted to see was "living in sin."

So happy about your Bee house! Maybe it takes a long time to establish trust. I have trouble with words like that- mine is orient, orientation,
orientated- I screw that one up all the time. Agree with Mr. Pudding, and language is what you make it, it is organic and personal as long as you are understood , that is the main thing. Ambitious reader. I hope it is worthy, that large book!

It's great to see that bee finding its way into the insect house. It'll be interesting to watch what happens next. I understand your anxiety about touching bags and faucets in public places. It's the new and very strange reality. Everything is suspect.

Awesome photo of the bee going into its house. Your backyard is beautiful. I can understand why you would want to sit out there and read. It looks so peaceful. I looked up cohabit and cohabitate (regarding plants) and Google uses both words to mean that they live and grow together. Happy Easter to you, Dave and Olga from Pogo and me. Hugs, Edna B.

nice shot of the garden and I'm sure your upstairs neighbor is enjoying it as well. yes, it is nice to see other faces. that insect house is looking a little worse for wear with that corner giving out.

I got introduced to those "insect houses" at the Desert Botanical Garden. They now have them everywhere in the garden. I've never seen any activity in theirs either so it's good to see that a bee has taken up residence in yours. I get that same feeling about touching things every time I leave the house. I have a small bottle of hand sanitizer in my car and when I go to the store and go back to my car, I use it. Then of course I wash my hands when I get home before unloading the groceries and again after I've unloaded them. Grocery shopping has turned into quite a process.

I find all kinds of uses of the word "cohabitate" through Google so I don't know what you mean. I also find cohabit but not as often.

I laughed out loud when I read what you had written about the plastic bag of water and COVID. I would have thought of it later too.

Your garden is beautiful!

Your plant is certainly thriving. Just lovely.
I grew up in west Texas and folks make up words all the time. I thought it was legal until I was well into my twenties. Lol Have you ever listened to GeeDubya Bush? My mother was from Mississippi and they also have a language of their own. I enjoy Haggard Hawks and seeing the evolution of English. Potato po tatt oh.

It's so nice to see your forget-me-nots and know that ours will be out in a month or so too. They are such a beautiful blue and spread so well (if they're not in a pot, that is).

I'm glad you're getting new tenants in your insect houses. Bees in particular need all the help they can get.

Sarah: Well now I'm curious what weed that might have been. I agree -- if the bees like it, keep it around!

YP: Hmmmm. That might be hair-splitting. I think they're basically the same word, and it appears both are acceptable, though Blogger gives me an error alert when I write cohabitate. (The red line under the word, as if it's misspelled.)

Red: I always thought they were gimmicky before this bee showed up!

Marty: "Living in sin" -- ha! I don't think it's xenophobic to call them The Russians as long as they ARE Russian. I bet they call us The Americans. (If not something worse.)

Linda Sue: I think the oriented/orientated thing is a British-American difference. I don't think people in America say "orientated," but they certainly do here.

Robin: I wish I'd had some hand sanitizer!

Edna: Yeah, I think both words are acceptable, but cohabit seems preferred...?

Ellen: Yeah, it's become weathered over time. Maybe that makes it more appealing to the insects?

Sharon: It IS a process, isn't it? I draw the line at wiping down the groceries, though. Some people do that, but I don't.

Catalyst: I mean that Google (or Blogger, which is owned by Google) gives me an error alert when I write cohabitate. It underlines the word in red as if it's wrong. But yeah, people definitely use "cohabitate" and I know that's the word I learned, though "cohabit" seems preferred. (Blogger does not underline "cohabit" in red.)

Lilycedar: Don't you hate that feeling? "Oh no! What have I done?!"

Penelope: That's true, Bush was making up words years ago, wasn't he?! I remember I once used the word "prioritization" in a news story and my editor insisted it wasn't a real word. (Although Blogger seems to accept it now.)

Jenny-O: Even in a pot, the forget-me-nots will spread. They grow in all the cracks in our patio and, as you can see, in the surrounding pots!