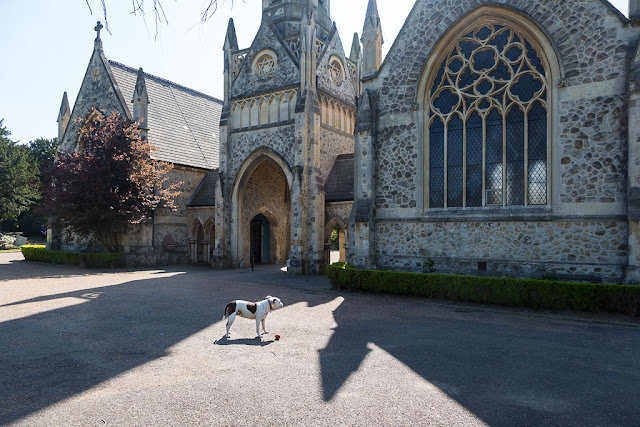 Another day, another walk in the cemetery. I really want to go inside this chapel. I'm dying to see what the interior looks like. But for the six years we've been walking here, it's been locked up -- much like the one at Paddington Cemetery. (At least this one's not fenced off, though.) 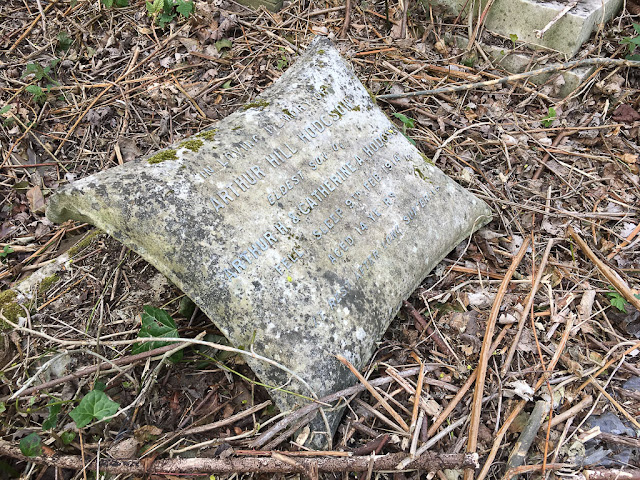 It looks like they've continued to clear some brush in the cemetery, revealing graves that were previously engulfed in ivy and blackberry. Here's a headstone I don't remember ever seeing before, shaped like a pillow, on the grave of a 14-year-old boy who died in 1914. "At rest after long suffering," the inscription reads. Wonder what the story was there?

We may all be going through a rough patch, but medically speaking, we still have it much better than people did 100 years ago.

So what else did I do yesterday? Well, I managed some gardening. The area where the fox-and-cubs (aka hawkweed) grows in our flower beds has been invaded by thick, tenacious grass. It seemed to be choking out the plants -- which, granted, some people consider weeds themselves. I pulled as much of the grass as I could and uncovered quite a few tiny fox-and-cubs sprouts, thus hopefully ensuring this year's flowers.

Also, Dave and I bought a new plant stand for the side of the house. 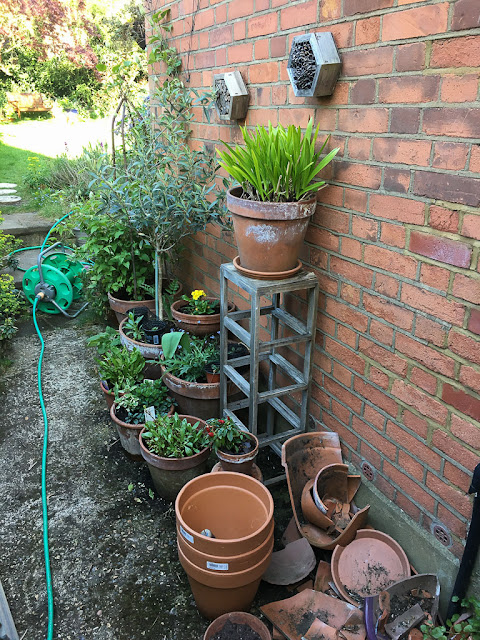 No, this is not the new one. This is the "before" shot. That crappy little wooden thing was something I found set out with someone's trash. It has served us well for several years but we thought we'd get something a little nicer. 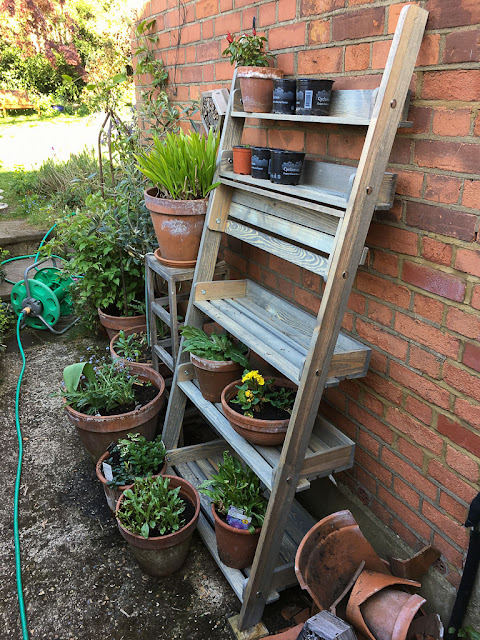 Here's the new and improved version -- although, as you can see, we wound up having to keep the crappy one too, because we couldn't fit the agapanthus onto the shelves of the new model. 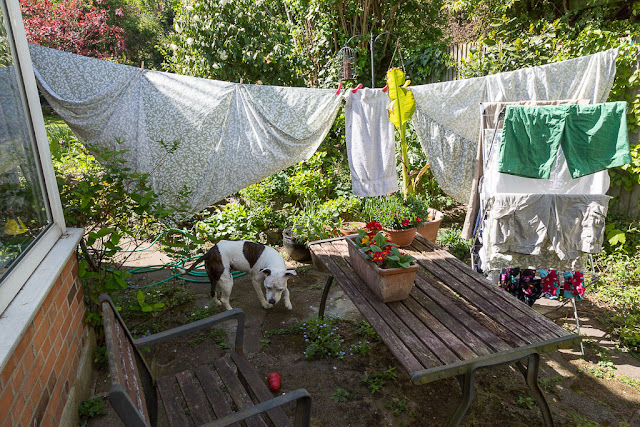 I also did laundry, including our bedsheets, which always require a sort of origami-like hanging technique. They're so big they drag on the ground and in the plants if I don't pin them up carefully. Fortunately, yesterday was a perfect drying day -- breezy, not a cloud in the sky. London felt like Los Angeles -- and believe me, it's rare that I can say that. We have another two days of cloudless weather ahead and no rain forecast all week, adding to the already weird Groundhog Day sameness of our lives.
Posted by Steve Reed at 6:31 AM

Lovely architecture..and intriguing headstone...if you like I can research a little for you, I have joined a well known research website....
It is a relief to have sunny dry weather, but now we need to water the garden! That staggered plant ladder looks nice. Look forward to see it developing!

YP I wonder if pinning sheets came from older English usage? It wouldn't be the only word to do this, the classic example being Fall..

I love how Olga's kong works as an element in your photos to link all the other red things--including those few clothes pins!

I love the whole look of you plant stands - the old one might be rickety, but it looks nicely rustic.

I think I've mentioned before that I'd love to be able to dry laundry outside, but we attract too many birds. I'm not taking the chance of having to wash the things twice!

Mr. P knows that not all Americans use dryers. Lots of people in my neighborhood hang their laundry outside.
Yep. Groundhog day. Every day. And yet, somehow, every day is different. Mr. Moon has been expecting a new bike helmet in the mail and it didn't show up yesterday when he thought it would. "Damn," I said. "That was going to be the highlight of the day!"
I love that old plant stand. It has character. The new one is nice too though.

In case anyone gets there before me, the spelling "drier" is interchangeable with "dryer" over here in Merry Olde England. And to Fresca remembering Wisconsin, what kind of pins did you use to pin the washing on the line? All those pinholes must have been most annoying. "Mom! There's pinholes in my dungarees again! Why can't you use pegs like they do in England?"

You're having much better weather than we're experiencing here. I love the new plant ladder, but I also love the "crappy" one. They look great together.

That plant stand is nifty, very efficient use of space with the ladder/shelves. I like it. I'd keep the other stand as well. The way you rescue plants, you need the space!

I remember seeing that chapel when I walked with you in the cemetery. It is a beautiful old building. It would be great to be able to see inside. I like your new plant ladder too.

Really nice new plant stand. It looks great. Ah the sheets in the wind. We won't be drying our laundry outside for another month probably. Still too gray and blah here for that.
About that church, I was a little surprised when you wrote that you had been "dying to see what the interior looks like..." Makes me wonder how many bodies in coffins had had the same thought. LOL!

The pillow grave stone intrigues me. I've never seen one like that. It's beautiful. Your new plant stand looks nice. You do a good job pinning the sheets up onto the line. I miss hanging the laundry out to dry. Enjoy your day, hugs, Edna B.

Yes, Groundhog Day. Every day is the same here, too. The computer in the morning, viewing recorded programs on television in the afternoon, cocktails in the evening. Actually sounds pretty ideal, doesn't it? But the enforced isolation does wear after awhile. We have to keep reminding ourselves that we elderly retired folk are better off than so many others.

sweet cemetery and Olga, Pillow is favorite headstone ever! Clever design for the plant stand , every little pot gets some air and sunlight. Very nice.

you are remaining active in many ways. You will not feel so penned up as some people do.

That crappy thing would cost you a fortune to buy x

Love the new plant-stand! But time to ditch the broken pots beside it, I think LOL! And where I am from (Queensland), we "hang" the washing on the line using "pegs". We have never owned a dryer (aka drier) but then our weather allows for outdoor drying year round. When I was a child, my mother washed by boiling everything in a copper then squeezing the clothes through a mangle over two huge cement tubs. She hung everything on a clothesline about 50 metres long, almost the length of our back yard. (There were three small kids of which I was the eldest). I know she used two or three long poles, 3-4 m long, each with a notch cut in the end and placed at intervals along the line to hoist the sheets skyward. Our clothesline now is a neat and compact rack that unfolds off the wall of the house. It must be Groundhog Day if the main topic of conversation today is clotheslines!

GZ: Yes! By all means, I'd love to know more! The name on the stone is Arthur Hill Hodgson, eldest son of Arthur H. and Catherine A. Hodgson, and he died on Feb. 9, 1914.

YP: We never had a dryer when I was growing up. My mom always hung out our clothes. And yes, you can "hang" washing, but you use clothespins -- and hence you can also pin it, but never peg it. Not in America, anyway!

Fresca: I love clothes that are dried outside. When we have dry weather here I always hang them rather than use the dryer.

Bug: Yeah, and it's still usable, so as long as it hangs together we may as well keep it!

Padre: Glad you like the pic! I've been trying to work with those shadows for a while now and this was one of the first pictures I liked.

Ms Moon: It's funny how such a minor thing can become a major event in the midst of all this monotony!

Mitchell: The new one somehow makes the crappy one look better. LOL

Sharon: Yeah, that's right, we walked past it, didn't we?! I forgot about that!

Robin: LOL -- I didn't even think about my poor choice of words there!

Edna: It's really unique, isn't it? I've never seen one like it either.

Catalyst: In some ways I enjoy the easy routine, but I don't like feeling confined.

Linda Sue: My only complaint is that the shelves are too close together, height-wise. It's hard to fit plants that have any degree of height.

David: Interesting that you use "pegs" as well as YP. We never say pegs in the states. That pile of broken pots is there because we sometimes use the terra cotta shards to improve drainage when we pot up new plants -- we put the shards in the bottom. We probably have too many now, though. I really should throw some of them out!

The search for AHH is intriguing.
I can find one b. 8 Dec 1900 in Kensington, son of AHH,b. Birkenhead and Catherine Affleck Hall b. Edinburgh, but he died in 1912. Their records relate to Hampstead and Kensington, respectively Church Street Kensington and 4a Devonshire Hill Hampstead.
There is another death for the same name in 1914, 12 February, Camden, London, but I can't take that further online as it is on a website you need to pay for, on top of what I have paid already!

It's odd that there are two AHHs senior...the one in Kensington, b 1866 and another in Barnsley Yorkshire b about 1888!

So, curiouser and curiouser!!

GZ: Interesting! Thank you SO MUCH for looking all that up. I bet the one born in 1900 and died in 1912 and the one who died in 1914 are actually the same person. Probably the date of death is simply incorrect on that first entry. It would make sense that the family might have lived first in Kensington and then in Hampstead, and Hampstead is in Camden so his dying there makes sense too.