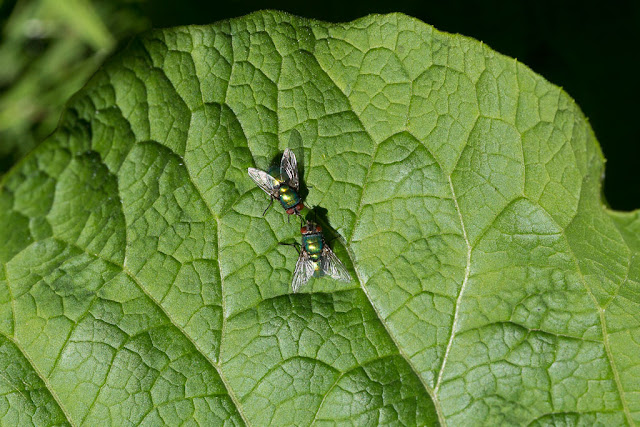 I loved the way these little flies were parked tête-à-tête, as if having a conference about some serious fly business. How to divvy up the dead mouse by the shed, maybe?

Yesterday I let Olga take me for a walk -- she chose the direction and the route. (Obviously I still held the leash!) We wound up on Billy Fury Way, probably West Hampstead's sketchiest pedestrian path, running along the railroad tracks. There's lots of litter, which is why Olga likes it, and in broad daylight I wasn't too concerned. But then we were approached by a scarecrow-thin guy who got right up in my personal space (well within two meters) and mumbled something. "What's that?" I asked, having not heard him, and he said, "Oh, sorry," and scampered away. I think he thought I was either buying or selling. 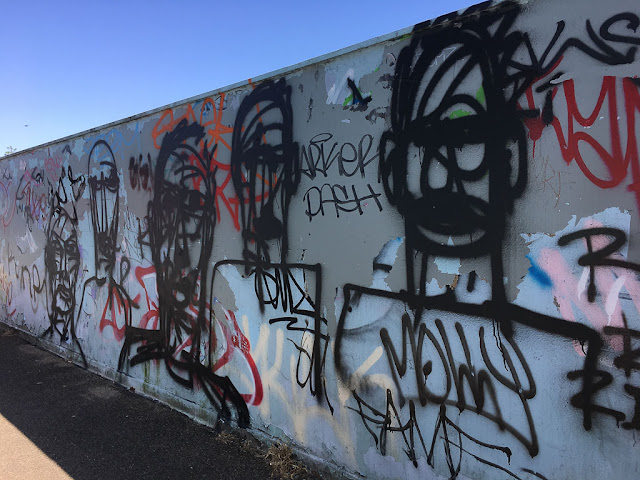 We found some interesting portraits spray-painted on one of the railroad bridges. 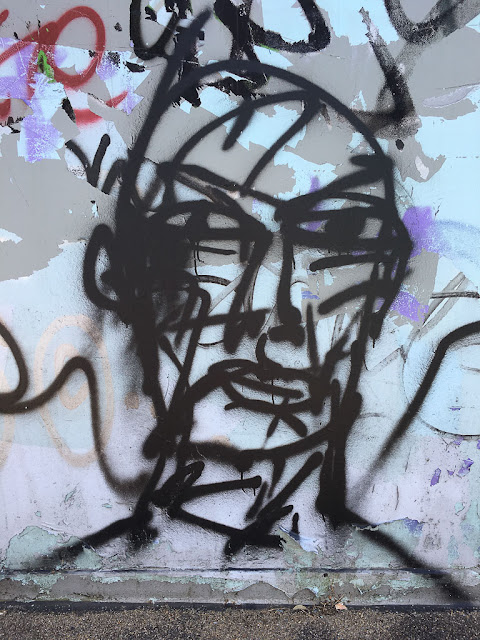 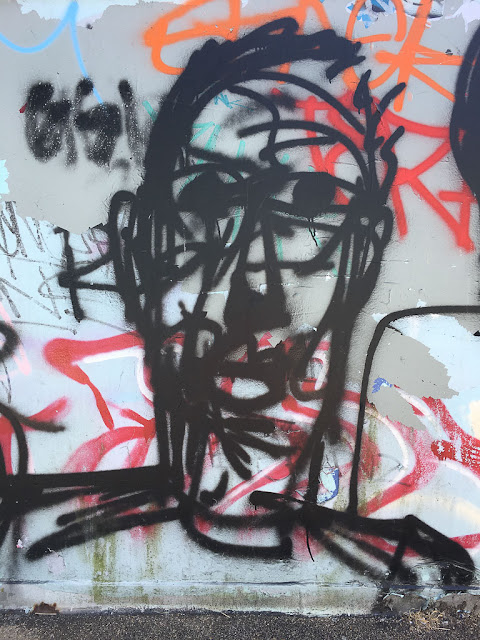 Other than that little adventure, life was pretty sedate. I read all day, and Dave and I watched "Alice Doesn't Live Here Anymore" in the evening. Ever since I heard last December about the death of Philip McKeon, who played Tommy in the TV show "Alice," I've had it in my head to watch the movie that inspired the show. (Even though McKeon isn't in it.) It's a good film.

Here's some of what's blooming now: 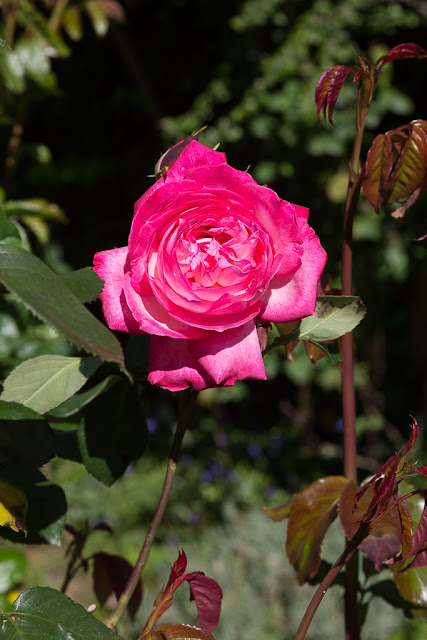 Our first rose appeared yesterday morning, and we have plenty more buds on the way. They seem to hit their peak about a month from now, as I recall. 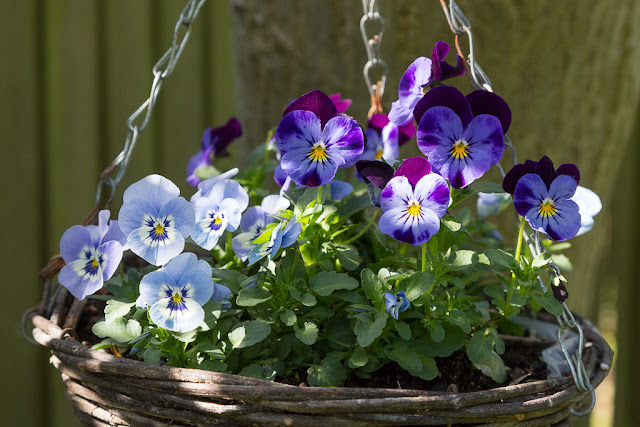 Mrs. Kravitz gave me a flat of violas, part of her hoard of free plants. I put some in a hanging basket and planted the rest around our potted blueberry bush, and they're all going gangbusters. 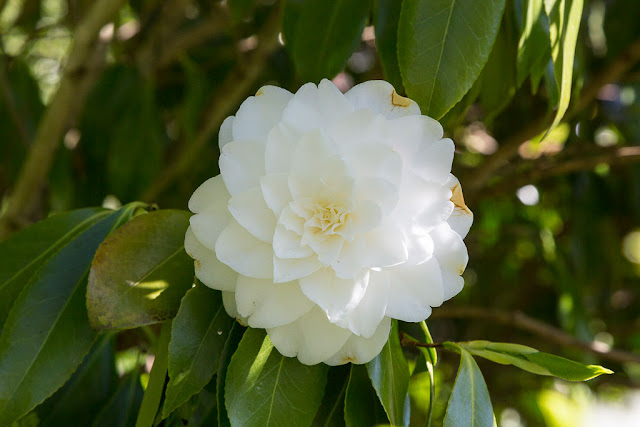 Our camellia has lots of flowers and even more buds. I've never been crazy about this plant -- the white flowers turn brown very quickly. But it was here when we moved in, so c'est la vie. (Apparently I am channeling my inner Frenchman today.) 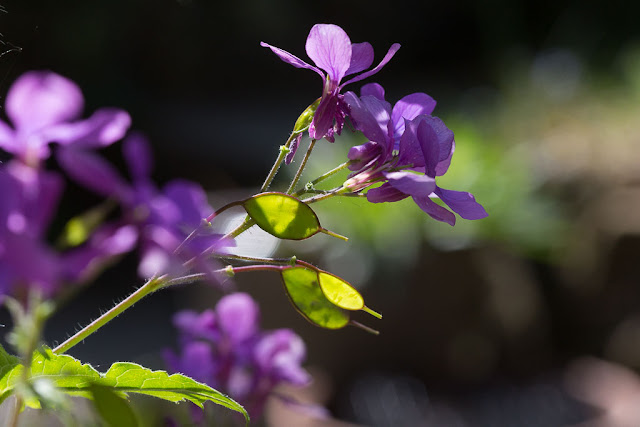 The honesty is still blooming, and the first little hints of its unique seed pods are appearing. By fall they'll be like round translucent windows, as you've no doubt seen in dried flower arrangements. (Dave keeps talking about bringing them inside, but I hate dried flowers. Besides, they'll re-seed themselves if we leave them in the garden over winter.) 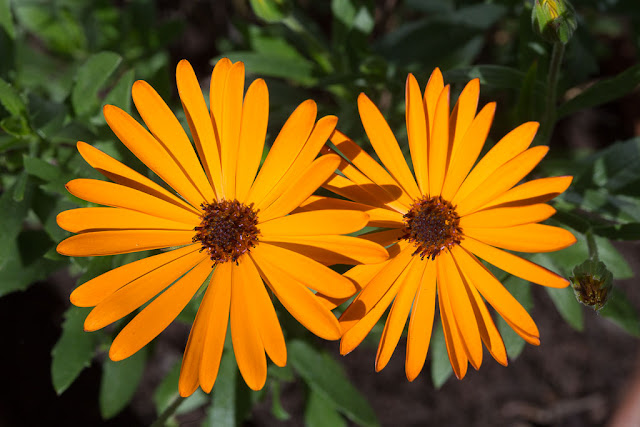 Finally, the African daisies have bloomed within the past day or two.

I tried to make another film of our foxes, and I put out some food for them, but somehow the food got eaten by a culprit who wasn't captured on camera. Wily!
Posted by Steve Reed at 7:24 AM

Sounds as if Olga has a penchant for the seedier parts of London!! I think you should be the boss next time and stay in safer parts.....don't want you being mugged !

If you could cut those two graffiti portraits out and stick them on a white wall in Tate Modern, gallery visitors would not know any different. They would pause and studiously observe them and read the little title cards "Pandemic I by William Fury (2020) - Skilfully replicating the suburban angst of careless street art, Fury conveys some of the emotional confusion experienced during the deadly COVID 19 epidemic."

Your flowers and flower photos make any day better. Although that graffiti is excellent, I don't think I'd let Olga choose the route very often. Makes one wonder if she's been sneaking out at night... and who exactly her friends are. You might want to have a little talk.

What beautiful pictures of your beautiful flowers.
I'd have been scared out of my wits if that guy had approached me.
So glad Mrs. Kravitz could spare a few flowers.

The scene in the restaurant, where she mixes up the plates, I have a very vague memory, seems the farmers/customers just went right on eating as she would take a plate away from them and put another down that she had just taken from another customer...it's been years since I've seen Alice doesn't live here any more, but that scene, I recall, was very funny and well played. It's been yeas since I saw it, a friend took me to the cinema when it was just out the first time.

Your flowers are so beautiful, adding vibrant color to the world.

Interesting choice by Olga. Obviously Olga doesn't dig flowers! Well maybe she does dig them up!

There is some hidden talent showing up in that graffiti you and Olga found. All those flowers are gorgeous. It's a perfect start to the day.

How lovely to watch spring arrive in your garden.

Maybe you should pick the paths from now on. It might be safer. Your flowers are gorgeous! It's not warm enough here for a lot of the plants but hopefully soon I'll lots of blooms too. You have a wonderful day, hugs, Edna B.

Lovely flowers, but those portraits.... stunning!!

Lovely flowers! And I love the graffiti portraits too. They remind me of some artwork I bought for Mike that I haven't given him yet - I'm going to TRY to hold out for our 30th anniversary, but that's December & I'm pretty sure I won't make it.

What a beautiful garden you must have! It's so nice to see sun and flowers. I have always liked portrait graffiti - it sort of breaks a face down to a gritty simplicity. (I can't believe I spent five minutes 'feeding' the koi!)

Gorgeous flowers!!! I especially enjoyed the pansies, a flower I love but just can't be grown down here in Florida (I don't think?) . Well, they might be happy here in winter.

The graffiti art is amazing. I am always fascinated by train cars covered in it.
Your flowers are lovely. We have finally had a bit of spring weather here and I look forward to seeing some blooms after all the snow we have had. It is funny Mrs. Kravitz shared one flat of all her free flowers. Such generosity!

I've wishes I were a brave reporter, out on the street asking people such as the man who approached you, "How are you getting through this?"

Frances: Unfortunately, Olga has strong scavenger instincts, which means she likes to walk where there's garbage. :/

YP: You should have been an art curator!

Mitchell: Yeah, we may need an intervention!

Ms Moon: Honestly, it happened so quickly I didn't have time to be scared. Having the dog along helped too, although if someone attacked me I'm sure she'd do nothing.

TJ: Yes! That's a great scene. It's actually Vera, another waitress, who does that -- she stands there and moves plates around for quite a while. It's very funny.

Robin: Thanks! That's what I'm trying to do here -- spread a little pleasantness.

Red: Ha! Fortunately, she's never been a digger. She tramples them sometimes, though.

Sharon: Yeah, I thought it was pretty good graffiti!

Catalyst: Aren't they great? I bought them after seeing the ones Sharon has blogged from Phoenix.

37P: It is such a privilege to have this space. (Even though we don't own it.)

Edna: Yeah, I'm thinking I really do need to discourage that route.

GZ: Aren't they nice? For what were surely very fast spray-can works.

Bug: Be sure to post a picture of it! Inquiring minds want to know!

Susan: I am so glad the koi still show up on my blog page. That's a very old widget and some browsers block it. I think Chrome is going to stop supporting Flash at the end of the year so it may quit working entirely. Meanwhile, they will appreciate all the food you give them!

Colette: I think you can grow them in winter...? But then of course there's a freeze risk. I feel like I've seen them in Florida but I might be making that up.

Penelope: Mrs Kravitz had so many flowers she literally didn't know what to do with them all. She hired a gardener to come around and get them all planted, but I think about a third of them have already died.

Fresca: You gotta wonder. Although I suspect in his case the answer would be quite simple -- his drug of choice!

I don't care for dried or fake flowers either. they get dusty and icky. it's fun to let the dog decide sometimes.