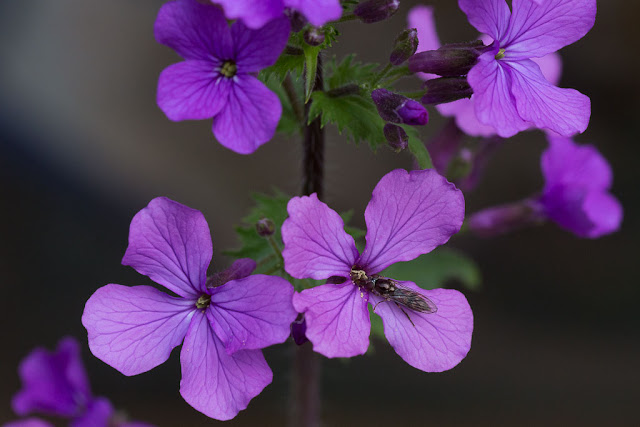 Not a whole lot of news today, but in a way that's a good thing. No news is good news, as they say.

I've been photographing a lot of bugs in the garden, like this hoverfly (above) on our honesty. It's amazing how quickly insects come out when the weather warms up. You will no doubt be seeing those pictures in coming days!

I went grocery shopping yesterday -- uneventfully. I mowed the lawn. I finished a book. 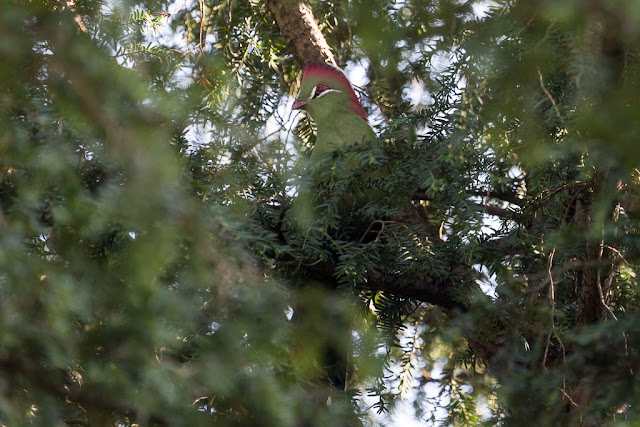 And when Olga and I walked to the cemetery, look what we saw -- the turaco! It's really hard to get a clear shot of that bird. I really wish I could get a picture of it flying -- it has brilliant red wing tips and is quite spectacular (similar to this, although that's a different type of turaco). Unfortunately it's also pretty fast.

When I first saw this bird, last summer, I assumed it was lost -- an escaped pet or zoo specimen. (It does have a leg band.) But yesterday I found a tweet that reported the existence of a turaco in the cemetery the previous summer -- 2018. (They called it a Knysna turaco, and this is actually a Fischer's turaco, but surely it must be the same bird.) So apparently it's been around for at least two years.

Apparently turacos eat fruit, so I don't see how it could survive over the winter on its own. Someone must be feeding it. In fact, I wonder if it's someone's pet, and perhaps it's allowed to fly free and return home again for food and shelter. Would a turaco do that -- behave like a homing pigeon? I have no idea.
Posted by Steve Reed at 7:19 AM

What an amazing colour that Honesty is!

Stunning photos. Can’t believe that Tura i is surviving there. What a beautiful bird.

You have probably already spotted this in your Google searching:-

A single white-cheeked turaco has been living wild in east London (Leytonstone and South Woodford). The sighting was recorded and confirmed in October 2009. It has survived the climate and potential predators for at least seven years and appears to be living in harmony with native species.

Like COVID 19, it seems that the turacos are taking over.

It looks like a little dinosaur. I love it!

colorful markings on the turaco. if it is someone's pet they must live close to the cemetery. or it could be that habitats are changing and birds and other animals are filling new niches. it must eat something besides fruit. unless it has access to a grocer's dumpster.

This bird may survive on any fruit that stays on a tree over winter. Some of our winter birds survive on the dried fruit.

I think it's amazing that the turaco lives there and apparently all alone. It's a beautiful bird. My friend David just texted me that he went shopping this morning too. He found paper products but still no cleaning supplies. It's a bit frustrating. I'm going to need some dish soap soon and I can't find it anywhere.
Beautiful flowers.

What a beautiful bird! Maybe it raids compost heaps, I sometimes see birds sorting my compost for tasty scraps.

The turaco might return home for food, what with all the restaurants closed during the pandemic.

That Turaco is so beautiful. It does sound like it might be someone's pet and returns home for food.

What a gorgeous photo of the turaco! It must have been very exiting to finally capture it. O, you beautiful bird, fly by me anytime.

Congratulations on getting the picture of the turaco. What a stupendous bird that is. The hardiness of tropical birds is amazing.

What a fabulous looking bird. That's a great shot. I've never seen one of these birds. The colors are gorgeous. I hope you do get a photo of it flying one of these days. You stay safe and have a great evening. Hugs, Edna B.

Frances: It's really pretty! Dave and I are both very pleased with it.

Mitchell: I can't believe it either!

YP: I have heard about that East London bird, but I didn't realize it had been living in the wild for SEVEN YEARS. That's remarkable. I just don't understand what they eat in the winter.

Ellen: Yeah, if it's a pet, I'm thinking it belongs to one of the houses around the perimeter of that part of the cemetery.

Red: I didn't realize that much dried fruit stayed around all year, but I guess it's possible. I've seen it mostly in yew trees, which develop red berries. I assume it's eating those when they're in season.

Sharon: No cleaning supplies? Wow. We haven't had that problem here, as far as I know. Here it was TP and pasta that we couldn't get for the longest time.

Dee: That's true, it might go after composting fruit or vegetables.

Catalyst: Unless it gets Deliveroo!

Robin: Isn't it pretty? In flight it's amazing.

Vivian: Yeah, I was glad to finally catch sight of it again.

Allison: Well, its home terrain is East Africa, and I guess that's not exactly an easy environment. But you'd think it would get so COLD here.

Edna: I'd never even heard of them until this one turned up. I didn't know what it was at first!