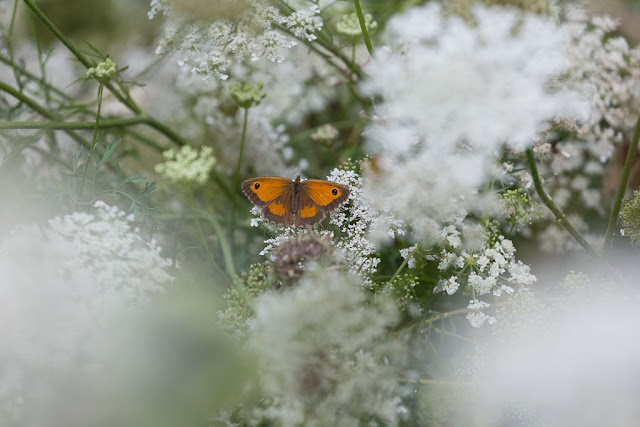 Thanks for all your comments and commiserations regarding me being locked out of the house (as related in my previous post). Some of you asked what happened to Olga, who I left tied to the porch railing in my narrative and never mentioned again. Don't worry -- the minute I got into the house, and while I was fuming at Dave, I went to the front door and let her inside. She wasn't on the porch for more than a few minutes.

Yesterday she and I went back to the cemetery, and this time I was careful to bring my keys!

Again, we saw lots of butterflies, including gatekeepers like the one above, and three Jersey tiger moths. The moths are mostly black when resting (as I showed in a photo a few days ago) but in flight they're bright orange, because of their colorful underwings. Amazing! 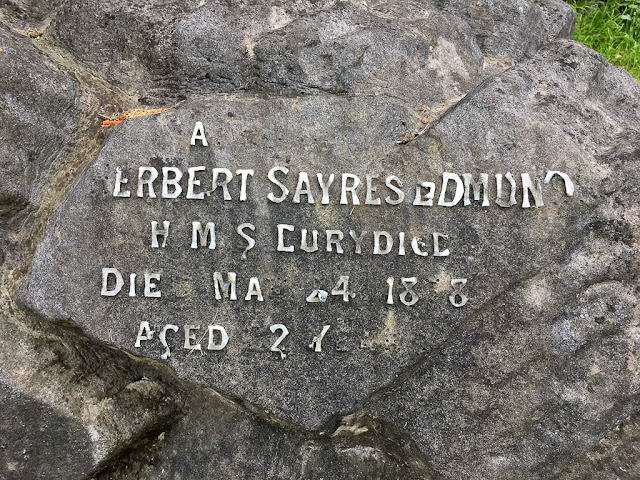 I've walked around Hampstead Cemetery dozens and dozens of times, but every time I go I see something new. I recently came across this headstone, which made me wonder about the reference to the HMS Eurydice. Turns out the sinking of the Eurydice was one of Britain's worst peacetime naval disasters -- it went down in a storm off the Isle of Wight in 1878, killing 317 people. I wonder if this particular sailor is actually in this grave, or if it's simply a memorial to his loss. (It's part of a larger headstone for many of his family members.)

Then I heard a very peculiar noise coming from a stand of trees. At first I thought it was a frog -- it sounded rather croaky -- but it seemed louder and more like a bird call. So I walked over with Olga and saw a flash of red and blue among the branches: 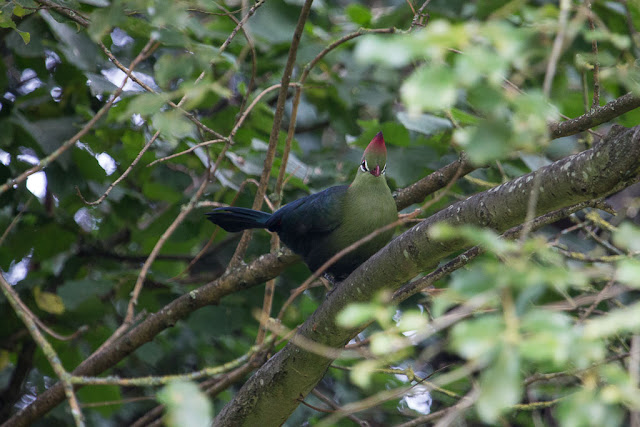 WHAT THE HELL IS THAT THING?! 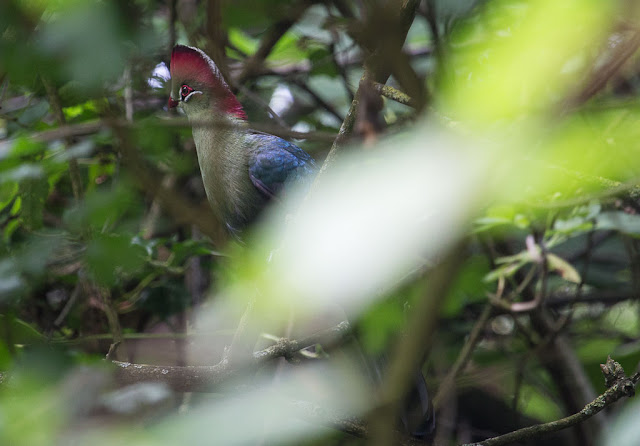 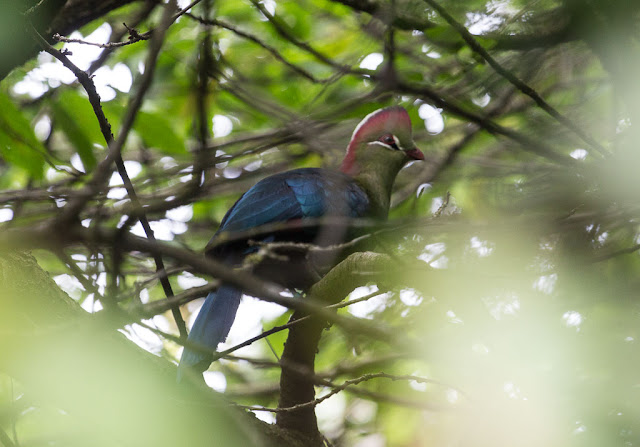 I've seen a lot of birds in the UK, but never one like this. Coincidentally I'd just finished T. C. Boyle's excellent novel about LSD experimentation, and the thought occurred to me that I was having an acid-trip-by-association! I thought maybe it was some sort of exotic pheasant or grouse, and once I got home I began Googling.

Turns out it's a Fischer's turaco, a bird native to East Africa. What it's doing running wild in West Hampstead is anyone's guess. It had a leg band, so it's definitely an escapee -- either a pet or a zoo specimen. I looked online for any recent references to a missing or lost turaco and found nothing. I sent a message to the International Turaco Society, and tried to call someone they'd identified online as a contact for news about lost turacos -- but it turns out that person had recently died and I guess no one else has picked up the reins. I called the London Zoo in Regent's Park and was told they're not missing any turacos. I put a public message on Facebook, and I renewed my Twitter account just to send an alert.

Of course, I didn't capture the turaco, so who knows if it's even still hanging around the cemetery. It must be very confused. Or maybe it's having the time of its life. Who knows?

Having spent the afternoon grappling with the turaco mystery, I had to quickly get dressed in order to meet my friend Colin for a concert in Hammersmith. We went to see k. d. lang, whose singing is magical -- I bought the tickets months ago and was so happy to see her again live. I last saw her in New York in June 2004, and I wrote in my journal afterwards, "She has a tremendous voice and yet she's one of those effortless singers -- she makes it seem so incredibly easy to hold strong, penetrating notes." I'm happy to report that's still true. She makes singing seem as easy as breathing. Which I'm sure it's not.

She sang many of my favorites, including Leonard Cohen's "Hallelujah" and her entire "Ingenue" album, perhaps her best-known record. (Her tour is based on the 25th anniversary of its release.) She also covered Joni Mitchell's song "Help Me," and talked about how hard it is to break down and individualize a Joni song -- the words and music being so tightly intertwined. It was a great show!
Posted by Steve Reed at 7:12 AM