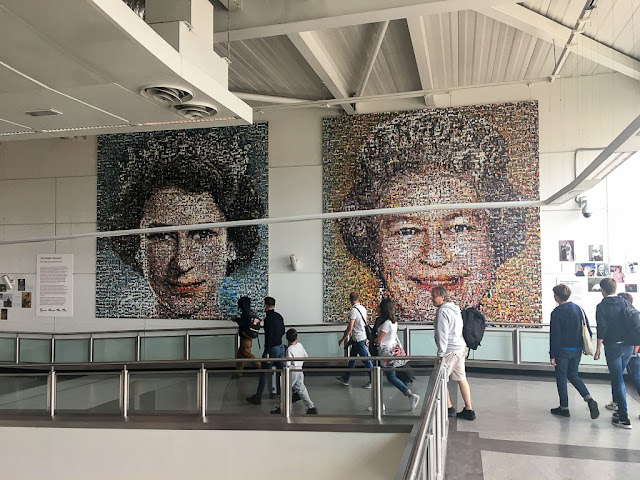 Here I am, fresh off an 8-hour transatlantic flight, relaxing with a coffee in our living room, Dave and Olga by my side. It's great to be home.

I had a good flight -- smooth and uncrowded enough that I could lie down across three seats and get a modicum of sleep. (Not very deep sleep, but some dozing, anyway.) I also read a peculiar little book called "The Waiter" by Matias Faldbakken -- I liked it, but it was very strange and the ending was even stranger. I'm not even sure I know what happened. Was I looking for literal meaning in something that wasn't meant to be literal? Was the whole thing some kind of metaphor? Hmmmm...

Anyway, it kept me busy, and I wouldn't discourage anyone from reading it. Just be prepared for an unusual experience.

When I landed at Gatwick, I encountered these two huge portraits of the Queen in the arrivals hall. I'm not sure when they were installed -- I don't remember seeing them before, but maybe I've just forgotten them? Anyway, they're interesting mosaics by artist Helen Marshall, made of snapshots of ordinary Britons who submitted pictures for the project. 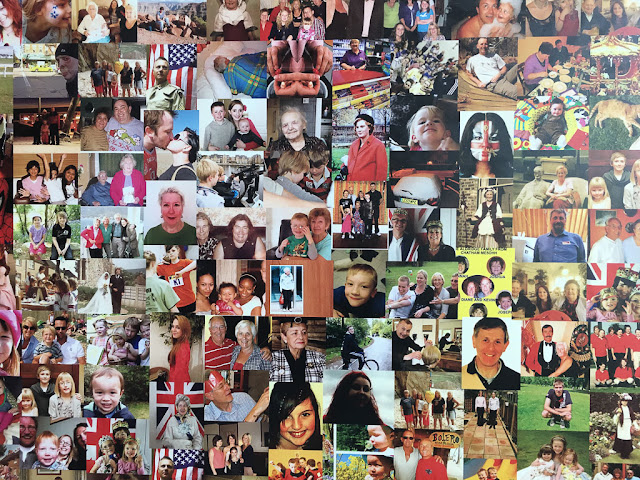 Here's a closeup of a tiny piece of one of the murals. Pretty amazing, huh?

Before I left my stepmother's house on Thursday afternoon, we watched "Mary Poppins Returns," with Emily Blunt and Lin-Manuel Miranda. I loved it. It lives up to the spirit of the 1964 original and I'm especially glad that Disney invested in some old-fashioned celluloid animation for some of the fantasy sequences. It was great to see Dick Van Dyke, Angela Lansbury and Meryl Streep among the cast members, as well as a cameo by Karen Dotrice, one of the kids in the first movie. I recommend it to anyone who's a fan of that earlier film.
Posted by Steve Reed at 12:05 PM

I liked Mary Poppins Returns, too. Linn Manuel Miranda's Cockney accent was just as bad as Dick Van Dyke's accent in the original and I thought that Michael Banks looked like a meth head, but Emily Blunt is adorable. It's disconcerting to see Julie Walters playing a senior citizen (she had the same role in the Paddington movies) since I remember her, still, when she was the ingenue in Educating Rita.

Isn't it amazing how you can wake up on one side of the Atlantic Ocean, and have afternoon coffee on the opposite shore? And you picked a good time to clear out of the USA -- it's going to be deadly hot this weekend and I'm sincerely worried about keeping my animals (the raccoons and possums and blue jays in my backyard, and the feral cat who lives on my front porch) safe from heat stroke.

Those Queen portraits are amazing! I always love those kinds of mosaics - so interesting.

I know you must be so glad to be home! It's going to take you a little while to decompress from your trip. I'm sure that Dave and Olga are so happy to have you back where you belong.
I LOVE those portraits of the Queen. Say what you will about the monarchy- that woman represents goodness and calmness and strength no matter what else is going on in the country. I wish we had something like that. Not a monarchy, of course, but some symbol that was as comforting.
I'll tell Gibson that it took you eight hours to fly home. He will be interested in that, as you know.
I surely am happy that I got a chance to spend some time with you while you were on this side of the pond.

those are amazing mosaic/murals. all those photographs, how does the artist even begin to organize them! glad you are home safe and snug.

I so admire people who can do mosaics. The whole process seems mind boggling to me. But the results are wonderful.

Wow! Those murals are truly stunning. What a wildly beautiful idea to make them of photographs. I love this so much. Welcome home, Steve!

I love those murals! Happy homecoming to you and thanks again for your visits and the beautiful bottle.

I liked Mary Poppins Returns too! It certainly did have the same spirit as the first. Glad you are back home and were greeted by the Queen. That is some mural! I don't think I could look at those tiny photos and figure out where they would best fit in.
Your book experience reminded me a book I read many years ago by John Fowles called The Magus. I read that book 3 times over the years and could never quite figure out what it was trying to convey. Obviously, it was interesting but to this day, I don't know the point. Like you said, maybe there wasn't a point.

I find those mosaics simply amazing. I can't imagine how the artist can see the completed project as he's working with those tiny snapshots. Glad you made it home safely.

Oh behalf of her regal majesty, her government and courtiers may I welcome you back to this sceptred isle following your brief sojourn in The Colonies? God Save the Queen!

To me, it's a rather meaningful way to put out the message of the Queen and her people.

I love mosaics. I always wanted to do one entitled my daughter's eyes but of course never did. Not sure how to go about it.

I'm envious that you got to meet Ms. Moon. I would love to meet her. One day.

Vivian: It IS mind-blowing to travel overseas in just a matter of hours. Your animals will find ways to cope with the heat, I'm sure, but put out lots of water!

Bug: I called them mosaics, but maybe they're more appropriately called collages. Anyway, they ARE amazing!

Ms Moon: I absolutely agree about the Queen. She really is a living symbol, and having her as head of state for so long provides a sense of constancy.

Ellen: I would love to know how much the artist used computers to arrange the photos, and also whether any of them were tinted to help the broader patterns emerge.

Colette: Isn't it crazy? I'd never be able to put something together like that. Chuck Close does it too, using tiny images to create a greater whole.

E: You're welcome! Enjoy it! I look forward to more writing from you.

Sharon: Wow! I'm impressed you read it three times. It must be really good. I think we have that one in the library -- maybe I'll try it one of these days!

Catalyst: I know -- it's incredible that she can visualize the "big picture," so to speak.

YP: Thank you, kind sir! And please convey my thanks to her majesty. You have a direct line to her chambers, do you?

Red: Absolutely! Nothing says Britain like the Queen! (Except possibly the Union Jack.)

Lilycedar: A friend of mine took a class in mosaics -- apparently they're quite popular with craft groups, although obviously not quite to THAT extent. Maybe there's one in your area that would help you complete your project!

I do indeed have access to one of Her Majesty's chambers... the small chamber in which her throne has a buttock-shaped hole.

The mosaics are wonderful--the Queen from age to age. The groupings of people's photos remind me of the scene in Love Actually where the photos of Heathrow arrivals were multiplied again and again.

Oh I love the mosaics of the Queen. What a great project. It turned out to be beautiful.
I am very happy that you had a safe trip home. It is always a good thing to (A) sleep on a long flight or (B) have something to keep you busy. A good thing that you had both. I am not familiar with the book. I have read some strange ones too.

Oh I just loved the old Mary Poppins so much and twice we tried to go and see the new one and it was sold out both times. We seem to encounter that a lot considering we live in such a big city. My daughter was lucky and got to see it.
Also Rhapsody was sold out but she got to see that one too. I really wanted to see it. My son and I were talking about it on Friday and he said that he was listening to the radio and they were discussing the movie, how they spent so much money to make it authentic and yet how many people were disappointed in the finale. He said that most people said they couldn't believe that they didn't actually use footage of the last concert. Oh well I didn't get to see it so I will have to wait until it comes out on DVD.