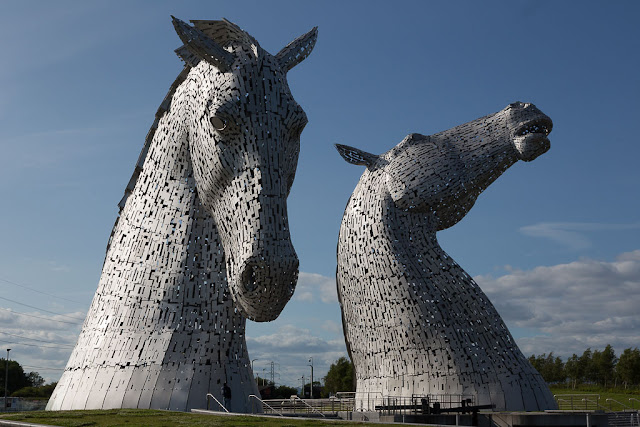 Someone asked in the comments yesterday why we chose to come to Falkirk, a small town between Edinburgh and Glasgow. Here's one reason -- The Kelpies.

The Kelpies are massive horse-head sculptures erected in 2013 beside a canal lock in a new park known as The Helix. Created by sculptor Andy Scott, they're 30 meters high and weigh 300 tons apiece. I saw a picture of them on Flickr not long after they went up and ever since then I've wanted to visit. 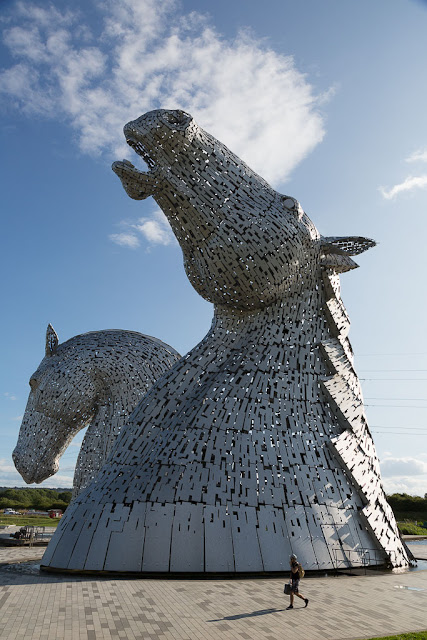 They're beautiful sculptures, with a lightness and energy that belies their size.

In Scottish mythology, kelpies are shape-shifting water spirits. They are often depicted as horses, but can also assume human form. Scott said he also intended the sculptures to refer to real horses and their labors along the canals, towing barges. 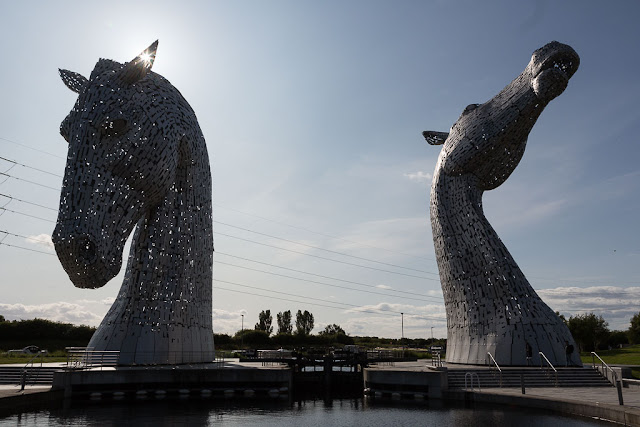 It's interesting to visit them at different times of the day... 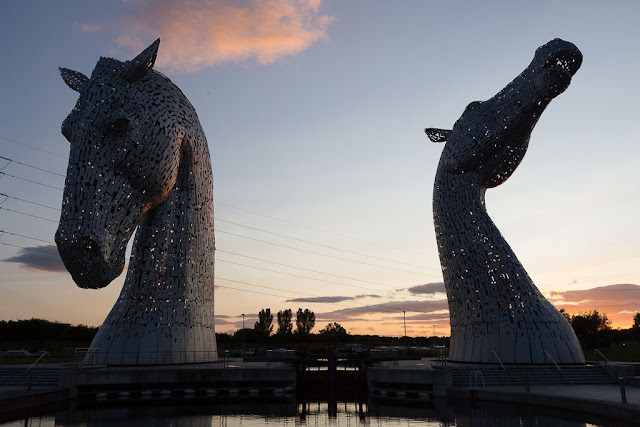 ...as the light shifts and changes. 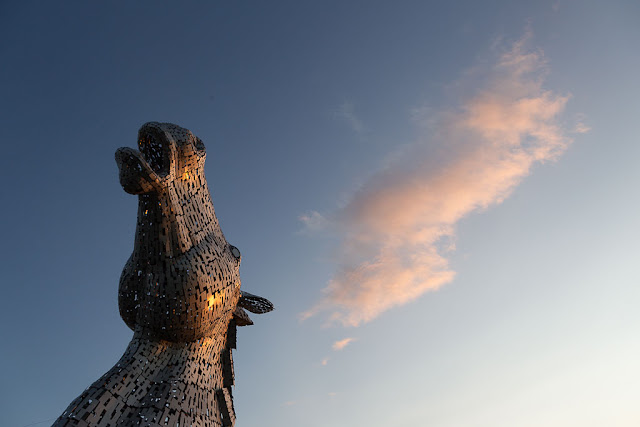 The train trip from London was long but uneventful. I read my Ian Rankin mystery (set in Edinburgh, so that seemed appropriate!) and snoozed. When we finally reached Berwick-on-Tweed, which is well north of Newcastle, I thought, "Whew! We're finally close!" And then a sign flashed by that said EDINBURGH 50 MILES. Argh!

We changed in Edinburgh for the train to Falkirk, and had lunch at a pub in town. I had a veggie burger and Dave, of course, had haggis. We finally reached our hotel yesterday afternoon. The hotel is a quaint but slightly quirky place, apparently an older home that has since been surrounded by industry and highways. It has some charm and, according to a sign prominently displayed on the reception desk, is the top local destination for people holding funeral teas.

While Dave had a nap, I took a walk and found myself at The Kelpies almost by accident. They're only about ten minutes away on foot. We'll probably visit again today.

Dinner last night was at a restaurant adjacent to the hotel. It was horrendous. I ordered a martini, because this place purported to be a bar, but if there was any gin in that martini it must have been about an eye-dropper full. It was the wateriest martini I've ever had. Not only could I not taste any gin, I wasn't even buzzed after I finished the drink -- and if you've had a properly made martini you know that should be impossible. I also had a soggy caesar salad with gloopy dressing. Dave had nachos covered in pizza sauce. We won't be going back there!
Posted by Steve Reed at 8:46 AM

You Yanks! You're so picky. Most Scots would die for a meal like that. Great pictures of The Kelpies by the way.

Mr. Pudding always makes me laugh. I've had very fine meals in Scotland but yikes, it sounds as if you had a throw-back dinner from the 1970s. Pizza sauce on nachos is revolting. There is no excuse for that any more.

Even as late as 1994 I would go into a bar anywhere in the UK, even London, and order a martini (I don't drink martinis now, but I did back then) and then I would clarify that I wanted an AMERICAN martini. You would be surprised how few bartenders knew what an American martini was. And even if they knew their James Bond, a martini should never be shaken, only stirred.

Lovely photos of the kelpies. Now that you're equidistant from Glasgow and Edinburgh, where to next?

Kelpies for the win! They are magnificent.
How can a restaurant like that stay in business?

love the kelpies. I wish I had scheduled a few more days when I was in Scotland for the artist's symposium in 2016. I did have about 4 hours to wander around Edinburgh but I got there late in the day and so the castle was closed.

It sounds like there could be many more stories about the Kelpies.

The Kelpies are so beautiful. What a grand sight that is.

Oh my gosh, your meal sound simply awful but, all these wonderful photos make up for it. I've seen pictures of these sculptures before but your photos from all the different perspectives are wonderful. I love the one with the man walking by. That really shows the dimensions and the last one with the sunset sky is also wonderful. Enjoy your stay....and find a better place to eat.

I went to the Great Google yesterday and inquired about the Kelpies. After reading all about them and viewing a great video I recommended a visit to a friend who is going to Scotland sometime this year. BTW, the Kelpies are lit in changing colors at night and are stunning.

Love the Kelpie pictures! I sure hope you have better luck with food today.

I've been reading Rankin's Malcom Fox series & enjoying it quite a lot. Thanks for reminding me about it - I'll see if the next book is available.

Wonderful pictures Steve.
I was once told by a local on a beach in the west if Ireland that kelpies can be heard singing on a moonlit night. I didn't hear a thing unfortunately.
Try some deep fried Mars bars while you're in Scotland for me.

That meal sounds dreadful but I can see why you wanted to see the Kelpies in person. Those are quite something!

Thank you for for the great pics & explanation of the Kelpies. I was in Scotland and Ireland about 2 1/2 years ago. Unfortunately the guy that I booked my trip thru (who was also the tour guide) was not very good. We had driven past these statues several times on the highway. They poke out above the trees. They were so large and really cool looking at night. But we did not get to visit the site. Of course, not using that tour guide again!
If you haven't seen some of the castles in Scotland, I recommend Stirling and Edinburgh Castles. Edinburgh is cool in that it is a small village! Also if you ever wanted some extraordinary scotch buy it at the store inside Edinburgh castle. It's actually a separate building that is part of the village that is part of the castle. It's pricey, but they best I have ever tasted. Normally I do not like scotch, but this is very smooth, about 60-75 pounds a bottle (I think one liter). I didn't buy it, and later looked for it at a regular liquor store & was told they ONLY sell it at Edinburgh castle. They did give free samples there to taste. I wanted to get it as a gift for my brother.
I hope to go back to UK again. Enjoy your visit!
-Mary